If this image inspires you then you might hate women, too. Now there’s support for you.

Daryush Valizadeh, often known by the nickname Roosh V, has had enough of women calling all the shots in society. Women today make almost as much money as men, hold almost 5 percent of CEO positions at Fortune 500 companies, and are bossy enough to say “no” to sex sometimes. Against this rising tide of feminism man’s reign is speeding toward an untimely demise.

That’s why Valizadeh is calling on proud, masculine men around the world to band together on February 6. On his website, Return of Kings, Valizadeh announced hundreds of meetups in dozens of countries for “neo-masculine” men. No projected attendance figures for any of the meetups have been released; the events have apparently been created just in case there are men nearby who subscribe to Valizadeh’s worldview.

What that worldview entails can perhaps best be gleaned from a post at Valizadeh’s website, Return of Kings, called “35 Things Wrong With America.” While he’s right on some points – wastefulness and police militarization, for instance – other gripes include the expectation of tipping, gay marriage and women who vote. Overall the list is a bitter reflection on how the world has moved away from Valizadeh’s simple, straight-male-dominated ideal. He comes across as a younger, more hateful Andy Rooney.

Valizadeh also focuses a great deal on political correctness. Like so many who harp on the issue, he can barely conceal his real desire, which is to say whatever hateful thing he wants about gays, women, fat people and others. Yet he doesn’t seem to see the irony when he himself gets uppity over books with titles like “The End of Men.”

But what really makes Valizadeh infamous are his views on rape. In an essay he later tried to dismiss as satire, Valizadeh argues the best way to stop rape is to legalize it, forcing women to better protect themselves from the threat. Under this system, “A girl would absolutely not enter a private room with a man… unless she is absolutely sure she is ready to sleep with him. Consent is now achieved when she passes underneath the room’s door frame.”

Not surprisingly, a campaign organized around such a ridiculous philosophy has met a fair amount of backlash. Protests were planned all over the world. Activists in several countries have even started petitions to ban Valizadeh, including in Canada, Scotland and Australia. Valizadeh is relishing in the bad press, actively tweeting responses to critics, flaunting his website’s boosted traffic and calling on “all attractive Australian girls in age range of 18-22” to meet him for drinks. He’s 36. 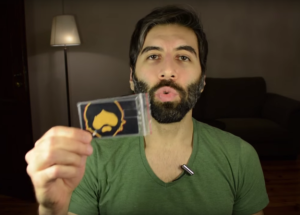 Roosh V, the man who will lead all men back to the promise land.

Deplorable as he is, Valizadeh should be allowed to say whatever he wants. This is one element of PC culture he’s actually right about. Rather than simply disagreeing with a person’s views, the tack commonly taken now is to ban that person from speaking at all. Counter-protests and public shaming, however, are themselves forms of free speech, and should be used in full force against Valizadeh and his followers.

So-called “men’s rights activists” like Valizadeh have been gaining a certain amount of traction, thanks largely to their insulated echo chambers on online message boards. Of course the movement really has nothing to do with rights; it’s all about entitlements. Most worryingly of all the movement’s members often display disturbing comfort with rape and other forms of violence.

Other than Valizadeh, perhaps the most famous MRA was Elliot Rodger. In May 2014, Rodger murdered six people in Santa Barbara and injured a dozen others. He left a fascinating video diary of his mental breakdown in which he talks specifically about what drove him to the killings: women wouldn’t sleep with him. Feeling entitled to sex that he wasn’t getting allowed Rodger to regard himself as a victim.

Rodger described himself as the “perfect guy” and a “supreme gentleman” in the same video he announced his need to kill. He’s extreme, but his attitude is not that different from those expressed by many others. The conveniently self-reassuring formula goes something like, “I’m a terrific catch but all these dumb broads don’t see it.”

It shouldn’t need to be stated, but if Rodger had no sex life it was him who was lacking, not the women. This point is completely lost on MRAs. They don’t recognize that their desire to dictate other people’s sexual decisions is the ultimate entitlement. Or they do, but they feel that’s the way it should be – as Valizadeh apparently does.

MRAs seem profoundly conflicted in how they feel about women. Valizadeh writes about how women should “want to get fully acquainted with a man for longer than two hours” before sleeping with him. But in another column he writes, “Getting laid is hard… the process from meeting an attractive girl to banging her requires several hours of time.”

They whine about being rejected, they complain about the effort required to get laid, they want women to be available, and they despise women who are promiscuous. They fixate on women as an object of ultimate desire and harbor seething resentment for them at the same time. Forget about trying to make any sense of it all; beneath their veil of hyper-masculinity these are some of the most confused and pent-up men on the planet.

There’s also a subtext of homoeroticism that makes the whole movement somewhat ridiculous. Valizadeh’s event, for instance, is dedicated to masculinity. Members are planning a clandestine meeting in parks, greeting each other with a secret password about a pet shop and proceeding from there to somewhere secluded. There they will discuss their contempt for women and praise the dominant male. The picture being used to promote the event is of shirtless barbarian beefcakes.

While Valizadeh seems to mean what he writes, there’s the distinct possibility he’s on some level trolling, cynically tapping into a lucrative market of men who are frustrated at their own insignificance. But people who take this ideology to heart have already brought carnage to the world. There is a danger in the movement’s members feeling emboldened to commit rape and other crimes. Valizadeh has a right to say what he wants, but the rest of us have a duty to keep an eye out.

7 thoughts on “Roosh V and MRAs’ toxic mix of entitlement, misogyny and violence”