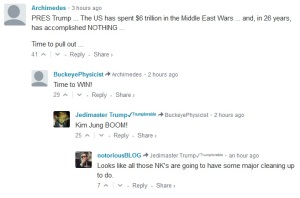 This is a screen shot of the top comment, and the top replies to it, on a Breitbart article covering President Trump’s bizarre “Calm before the storm” statement. Late Thursday night, Trump made the remark at a gathering of military personnel and, when asked to elaborate, only said, “You’ll find out.” This is clearly a man built by the media – only now, the cliffhanger isn’t whether or not he’ll fire Meatloaf, but whether or not he’ll plunge the globe into a catastrophic nuclear war.

Looking at Breitbart for five minutes every now and then can occasionally be an eye-opening experience. There is usually little to learn in the body of a story, but a quick look at the headlines and comments can reveal some uncomfortable truths about how a broad segment of the “white working class” thinks and how their worldview is sculpted.

In this case, the first comment is reasonable enough. But the thread quickly goes from protesting intervention to cheerleading war with a nuclear power. This striking disconnect matches Trump’s own scattered campaign rhetoric. During the campaign, some people were naive enough to characterize Trump as a “non-interventionist.” This was primarily because he criticized the Iraq War. Of course that was primarily to score points off of Hillary Clinton, who supported the war. Trump also boasted about how he’d bring back torture, considered launching nuclear strikes, complained about the Geneva Conventions, and openly wanted to use the military to pirate Middle East oil.

It would be foolish to read too deeply into a small selection of comments from anonymous posters. But there is nothing that jumps out about the remarks to suggest they are trolls. The comments all have up-votes, and are by no means uncharacteristic of others found all over the site.

Presumably, the readers of Breitbart all agree, to some extent, on how they feel about the president. After all, the main mover and shaker of the site, Steve Bannon, was Trump’s chief adviser. Throughout the campaign and much of his presidency, Bannon’s Breitbart has served as a propaganda hub for Trump. So it’s a fascinating insight to realize that they are divided over an issue as monumental as nuclear war. It goes a long way toward revealing the intellectual void in which the far-right operates – or, perhaps, all such things are secondary to their shared primary goal of expunging nonwhite immigrants from the United States.