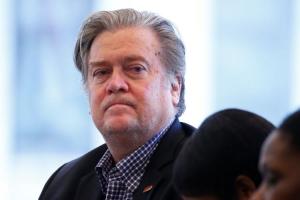 Steve Bannon, the former head of Breitbart who salvaged Donald Trump’s flailing presidential campaign, is out of his White House post.

Steve Bannon is out at the White House. For weeks, politicians and pundits have called on Trump to fire the man who made him president, and today it was confirmed Bannon is moving out. While this could hardly be seen as bad news – and after this week, anyone who feels like taking a moment to celebrate probably should – it’s not quite the earth-shattering event that the headlines it’s generated make it seem.

For one thing, it’s not totally clear what Bannon’s formal power was. As the Chief Strategist he was certainly influential, but he was chiefly an advisor to Trump – a role he can continue to play. Bannon himself predicted he’d be in the job only eight months. In that time he was able to begin his goal of “deconstructing the administrative state” by helping Trump appoint cabinet heads who were brazenly hostile to the mission of public service. So his departure may, indeed, have been planned well in advance, and had nothing to do with the political pressure on Trump.

It doesn’t do much to change the crypto-white nationalist composition of Trump’s White House, either. There is still Sebastian Gorka, Stephen Miller, and Jeff Sessions, for starters, not to mention Trump himself. Trump insists there were “very fine people” carrying torches for the Confederate statues in Charlottesville. He first came to national attention in the 1970s over housing discrimination and he rode the birther lie to political prominence in 2011 and 2012. He doesn’t need anyone whispering in his ear to be racist; it comes from within.

What is interesting is to note just how embattled this presidency now is. Republican Congressmen are starting to trickle away here and there. Some establishment Republican pundits have turned away. Even some elements of Big Business, the primary movers and shakers of the GOP, want to distance themselves. Now some of the alt-right, which was always more loyal to Bannon than to Trump, may ponder jumping ship as well – a senior Breitbart writer has already warned that Trump may be “Schwarzenegger 2.0” and many of the reader comments convey a sense of panic and betrayal.

This may cause a fissure for some of Trump’s base, but not much of one. The proudly deplorable racists of the alt-right, who dress like Trump and wear his hats, won’t give up hope. And Trump will still enjoy the support of tens of millions of Americans who simply don’t care one way or the other about race issues, who aren’t that well-informed, or who only want their taxes cut and they don’t care who does it.

And Bannon isn’t going to just disappear gently into the good night, either. His allies are warning that “Bannon the Barbarian” is now unleashed. He already pulled Breitbart from its dark corner on the fringe-right web into being the de facto propaganda network of the US presidency. With the influence he’s amassed in his White House run, Bannon could potentially do far more damage outside the government, as a propagandist and organizer, than he ever could within.