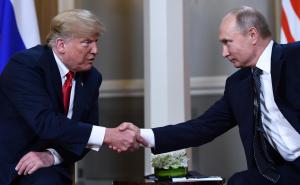 Donald Trump and Vladimir Putin shake hands at a summit in Helsinki, Finland, on July 16.

After his submissive appearance alongside Russian President Vladimir Putin at a summit in Helsinki last month, President Donald Trump faced some of the most severe and unanimous criticism of his chaotic political career. Members of Trump’s own party called the president “treasonous” and “disgraceful” while commentators speculated that Putin must have serious kompromat on Trump to make him behave so obsequiously. As the media and the FBI connect the dots of Putin and Trump’s relationship, their most obvious common interest in oil goes largely undiscussed. END_OF_DOCUMENT_TOKEN_TO_BE_REPLACED