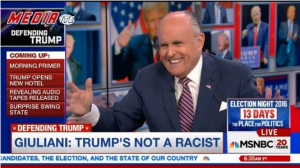 In his defense of Donald Trump, Rudy Giuliani declares, “To call anyone a racist is outrageous.”

Comedian Louis CK has a bit about white privilege that includes a riff on the lack of effective racial slurs against white people. “Ruined my day,” he mockingly complains after being called a cracker. It’s an interesting observation, but CK overlooked one word that does cause white people to become uppity: the word “racist” itself. For many white people, it has become a slur in its own right. END_OF_DOCUMENT_TOKEN_TO_BE_REPLACED

A theory: Comey firing proves Bannon is still in charge of the White House 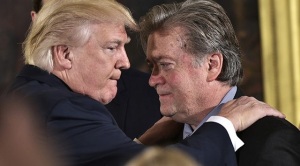 Steve Bannon is the likeliest administration member to push Trump into full authoritarianism.

Donald Trump fired FBI director James Comey because he was leading an investigation into Trump’s Russia connection, whatever that may or may not be. But even as Trump essentially admitted this was the reason in a TV interview, the Trump Administration made one ridiculous excuse after another. First Trump passed the buck to Deputy Attorney General Rod Rosenstein. But when Rosenstein passed the buck back, Trump trolled the world and said Comey was fired because of his mistreatment of Hillary Clinton.

It’s a pitiful naivety that would allow anyone to believe anything Donald Trump says, particularly about this case. What the whole episode really proves, though, is that the rumors of Steve Bannon’s demise were greatly exaggerated. The decision to fire Comey may have been Trump’s, but Bannon’s fingerprints and the fingerprints of the alt-right are all over it. END_OF_DOCUMENT_TOKEN_TO_BE_REPLACED

The problem of cop-on-citizen crime is cultural 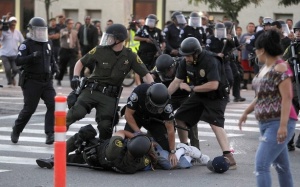 Police use violence to contain a crowd in Anaheim protesting police violence in 2012.

Whenever a black, brown or Muslim person commits a crime, pundits spend the next news cycle trying to diagnose what it is about those communities that produces such violence. White Americans are so convinced the problem is with the groups themselves, and not individuals or social forces, that they elected a president who wants to ban all Muslims, build a wall to keep out immigrants, and instill law and order in black neighborhoods.

Yet when a police officer kills an unarmed citizen, media presents the officer’s side of the story; digs into the victim’s past for any evidence of wrongdoing, no matter how petty; and urges the public not to turn against law enforcement. When the officer is truly indefensible, he’s cast as a bad apple. But if there’s any group in America whose violence needs to be examined on a systemic level, it’s the police. END_OF_DOCUMENT_TOKEN_TO_BE_REPLACED