The embarrassing futility of ‘principled Republicans’ who attack Trump 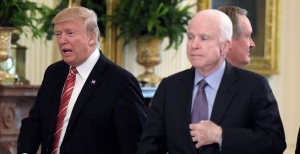 Every now and then, the craven indecency of Donald Trump pushes some members of the Republican Party to stand up and say that this time, the president has gone too far. These are supposedly the GOP’s respectable men of stature. They may agree with virtually all of Trump’s policies, but they can’t abide his dirty language or disrespect of sacred cows. Whenever one of these so-called “principled Republicans” chides Trump in public, though, Trump just mops the floor with them.

The latest example is Trump’s ongoing feud with former Arizona Senator John McCain, a man who’s been dead for seven months. In interviews, tweets, and at rallies this week, Trump has frequently criticized the late senator, saying, “I never liked him much… I really probably never will.” Trump said McCain’s vote to protect Obamacare was “horrible,” accused McCain of spreading fake news with the Steele dossier, and complained that McCain never thanked Trump for the spectacular funeral Trump – apparently falsely – claims he granted him.

In response, Trump has taken some of his harshest criticism to date from fellow Republicans. Former Trump Communications Director Anthony Scaramucci called the attacks “stupid” and “socially unnatural.” Longtime McCain ally Senator Lindsey Graham spoke out. Senator Mitt Romney tweeted, “I can’t understand why the President would, once again, disparage a man as exemplary as my friend John McCain.”  Establishment Democrats, too, have almost unanimously defended McCain’s honor and called on Republicans to stand up to Trump’s undignified remarks.

If the attempts from high-level Republicans to be part of the “resistance” against Trump are intended to convince movement Republicans to place their support elsewhere, they are ineffective. Among Republicans, support for Trump is at 90 percent. The Republican base might well hate anti-Trump Republicans even more than establishment liberals do. This is another big part of the problem. Every time a “principled Republican” criticizes Trump, establishment media treats it as major news and makes themselves look just as silly in the process. 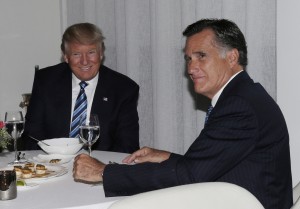 In January, just days before being sworn in as a senator, Mitt Romney published an editorial in the Washington Post in which he wrote, “As a nation, we have been blessed with presidents who have called on the greatness of the American spirit. With the nation so divided, resentful and angry, presidential leadership in qualities of character is indispensable. And it is in this province where the incumbent’s shortfall has been most glaring.” Trump’s leading propaganda rag on the internet, Breitbart, simply responded with a column titled, “Mitt Romney is an idiot.”

Politicians like Romney have next to no sway with Trump’s base, which now makes up the majority of the Republican Party. No one on the left should want Romney on their side, either, nor should they be rushing to defend John McCain, a reliably pro-war senator who once gleefully sang about bombing Iran. Such unsavory alliances with establishment Republicans win over nobody and create further division between establishment liberals and the progressive left – a schism that already helped Trump win one election.

Even the left’s enthusiastic support of Special Counsel Robert Mueller is problematic. Before he started his legitimate investigation into Trump, Mueller served as the head of the FBI under President George W. Bush, a position in which he rounded up, detained, and allegedly abused Muslims. Bush himself has undergone a public rehabilitation in the Trump era, embraced by liberals like Michelle Obama and Ellen DeGeneres. The deeper liberals settle down with these fanatically far-right Republicans, the less value they will be to any truly leftist cause.

When establishment Republicans attack Trump, they are speaking to a small audience of fellow establishment politicians and media figures. Anyone still supporting Trump through the myriad scandals of corruption, adultery and bigotry won’t change their minds because of a stuffy Mitt Romney op-ed. If Trump’s base is savvy enough not to be won over by the more pleasant demeanor of “principled Republicans,” it’s a constant source of embarrassment to see that establishment liberals so frequently are.

Trump rode to victory in the Republican primary, and to a significant extent in the general election, by obliterating the politics of politeness. He is at his best when he fights dirty and keeps his opponents on the defensive. No amount of vulgarity, scandal, or criticism, even from revered party elders like McCain, can turn his political cult. The left could learn a few things from Trump’s political playbook and be unashamed, unapologetic, and bold, rather than pine for a return to the phony, sanctimonious politics of establishment Washington.