Baltimore mom, Toya Graham, should be proud of her son 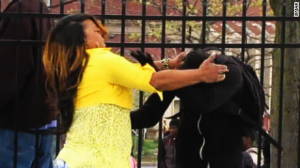 Toya Graham grabs her protesting son and forces him to go home with her.

Toya Graham, a single mom in Baltimore, became a viral sensation after showing up to a Freddie Gray protest, finding her son Michael among the crowd, and smacking and berating him into going home. Before their names were even known, commentary flooded social media. The consensus seemed to be that Toya did the right thing, with some even labeling her Mom of the Year. But it is her son who we should all be applauding and encouraging.

Better not to judge the parenting tactics of others – particularly single, black mothers juggling six children – so this article won’t. But the story has been widely misinterpreted as a mother shocked and appalled at her son’s riotous behavior. While Graham says she doesn’t believe violence against police is the right course to take and was disappointed in her son for potentially participating in it, the primal motivation can be heard in the video when she appears to say, “Do you want to get killed?” and in interviews afterward: Toya feared her son might end up another black kid in a headline. END_OF_DOCUMENT_TOKEN_TO_BE_REPLACED 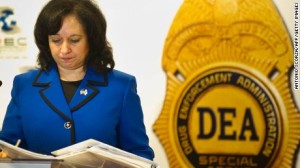 In May, the head of the Drug Enforcement Administration, Michele Leonhart, will resign from her post amid allegations that agents participated in sex parties with prostitutes paid for by Colombian drug cartels. This is only the latest and raunchiest in a litany of alleged offenses committed by the agency during Leonhart’s reign, including bribery, prisoner abuse, withholding information in trials, excessive surveillance, and the shooting of children. As David Graham, who catalogued several such offenses in a recent Atlantic piece, put it, “It’s not that the outrage in this case is misplaced – it’s that it’s a day late and a trillion dollars short.” END_OF_DOCUMENT_TOKEN_TO_BE_REPLACED 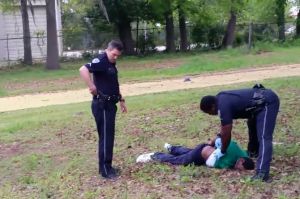 Community-oriented keepers of the peace slap handcuffs on a dying man who the officer on the left just shot five times in the back.

Add another notch in the American police force’s belt. This time, it’s Walter Scott, a black man in North Charleston, South Carolina, summarily executed by sociopath-in-blue Michael Slager. Scott is just one of, statistically, three people to be killed by a cop that day, April 4. But his story has generated special attention for two important reasons: first, his murder was filmed by a passerby, and second, his killer has been fired and charged.

Because of shoddy recordkeeping, there’s no accurate count of how many citizens have been killed by police, justifiably or otherwise. But in just the past eight months, several high-profile cases have made household names of black Americans killed by police. There was Tamir Rice, the 12-year-old who was shot for the crime of playing with a toy gun in Cleveland; Eric Garner, the man who was choked to death for selling loose cigarettes; Michael Brown, the 18-year-old who was shot in the climax of an altercation that began with his jaywalking; and now, Walter Scott, who was executed for fleeing a broken taillight traffic stop. END_OF_DOCUMENT_TOKEN_TO_BE_REPLACED

War, from a last resort to the first 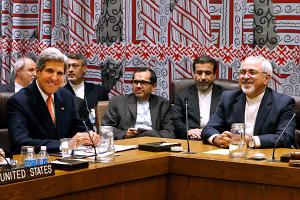 Last week, the United States – along with five other powerful nations – reached an agreement with Iran on its nuclear program. In exchange for the lifting of some sanctions, Iran will diminish its nuclear ambitions and agree to international inspections, marking a mild diplomatic milestone. Naturally, for conservatives, this makes it an apocalyptic disaster. END_OF_DOCUMENT_TOKEN_TO_BE_REPLACED