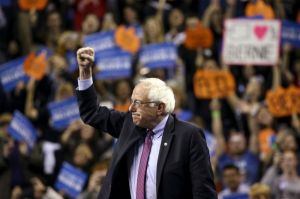 Hillary Clinton had a huge night on Tuesday, winning four out of five states and expanding her already substantial delegate lead. From here Bernie Sanders needs to win about 1,000 of 1,200 delegates remaining to clinch the nomination. Not even the most inspired idealist can fail to recognize the rapidly shrinking prospect of Sanders becoming the Democratic nominee. Tradition dictates that a losing candidate’s supporters vote for the party’s eventual nominee in the general election, but this election has been anything but traditional. END_OF_DOCUMENT_TOKEN_TO_BE_REPLACED

Activists gather on the steps of the Capitol Building in Washington, D.C. to protest money in politics and fight to overturn Citizens United.

Those who get their news primarily from the television may have missed the record-breaking protests going on in Washington, D.C. over the last week. Activists hoping to bring a “Democracy Spring” to the U.S. have been demonstrating against the corrupting influence of money in politics. More than 1,400 of them have been arrested since protesting began on April 11, breaking the arrest record for “non-violent direct action protests in Washington for a single week,” according to The Nation.

But mum’s the word in corporate media. According to The Intercept, in the days following the start of protests the three major cable networks devoted less than 30 seconds of coverage to them. CNN didn’t mention them at all. MSNBC talked about them for 12 seconds. FOX News talked about them for 17 seconds. Even then the networks missed the point, characterizing the activists as pushing “for improved ballot access and voting rights.” END_OF_DOCUMENT_TOKEN_TO_BE_REPLACED 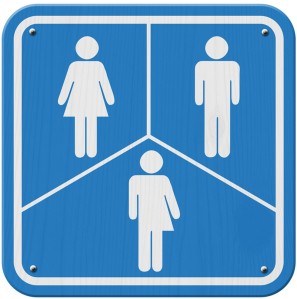 You may have seen this gender-neutral bathroom sign somewhere and felt an overwhelming sense of inclusion.

With the nation having pretty much wrapped up its discussion of gay marriage, conservatives are scrambling to find another wedge issue for future elections. North Carolina’s controversial House Bill 2 highlights just how desperate they are to find such an issue.

HB2, otherwise known as the “bathroom bill,” requires individuals in public places to use the restroom that matches the sex they were assigned at birth. It is widely seen as deliberately targeting transgender Americans. Because of this, the bill has attracted scathing criticism, including high-profile boycotts of the state by entertainers like Bruce Springsteen and Ringo Starr. END_OF_DOCUMENT_TOKEN_TO_BE_REPLACED 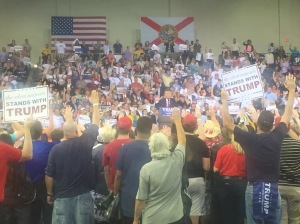 At a Florida rally, Trump implores supporters to raise their right hands and promise to vote for him. (Photo by Jenna Johnson/Washington Post)

Once upon a time a white supremacist could be relied on to be, if nothing else, upfront. They weren’t shy about their worldview that whites are being systematically driven to extinction by mixed marriages, street crime and liberal politics. But now that Donald Trump’s presidential campaign has popularized racist identity politics, some white supremacists are seizing on the opportunity to reach a nationwide audience by toning down their rhetoric and going politically correct. END_OF_DOCUMENT_TOKEN_TO_BE_REPLACED

Hillary Clinton in 2015 giving what CNN described as an anti-Wall Street speech.

Almost from the moment she lost to Barack Obama in 2008 predictions about Hillary Clinton’s 2016 presidential campaign began. In the intervening eight years no other names were even seriously floated. Yet for all the presumptuousness and all the leg-ups she’s received from donors, corporate media and the Democratic establishment, the fact remains that she is just not a good candidate. Whether she ends up with the nomination or not, Clinton’s 2016 run has been a debacle highlighting the worst of American politics.

Clinton began the 2016 race as the only household name on the Democratic side. In the campaign’s early months she enjoyed national polling that consistently had her at a 60-point lead. Now she’s jockeying with Bernie Sanders for the national lead and with Sanders’s 13-point win in the Wisconsin primary, Clinton is on a six-state losing streak in the nomination process. She remains well ahead in delegate count, but considering the advantages she had she’s done about as badly as possible.

In an election that’s largely been a referendum on decades of neoconservative foreign policy and Washington’s coziness with Wall Street, Hillary Clinton is as entrenched a figure of that establishment class as there can be. It’s a testament to our system’s thorough corruption that she’s in the race at all. END_OF_DOCUMENT_TOKEN_TO_BE_REPLACED

Spinoff shows don’t usually generate the same level of enthusiasm and critical appreciation as their parent series. In today’s Golden Age of Television, the very term “spinoff” suggests an idea that’s run its course but left a few dollars on the table for the studio to scrape up. Not so with Breaking Bad prequel Better Call Saul, a show that manages to have an identity of its own and step beyond its epoch-defining parent’s legacy. END_OF_DOCUMENT_TOKEN_TO_BE_REPLACED