I’d love to know what Darren Wilson, the white police officer who killed an unarmed black teenager, thinks of the rioting, looting, gunfire, and tense protestor/police standoffs that erupted in Ferguson when a grand jury, well after dark on Monday evening, announced its decision not to indict him. Based on Wilson’s testimony to the grand jury and the story he and his department have told ever since Wilson put six bullets in Michael Brown back in August, he might feel like none of this is his fault. 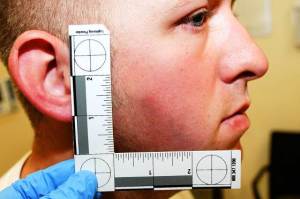 A series of photos show officer Darren Wilson’s injuries following his encounter with Michael Brown. The almost-invisible swellings and red marks pale in comparison to the gunshot wounds that tore apart Brown’s body.

It’d require some enormous suspension of disbelief to accept Wilson’s story as the whole truth. Allegedly, Wilson politely asked Brown, who was doing nothing more than walking, to move off the street and onto the sidewalk. Brown refused and the situation escalated. The 6’4″, 210-pound Wilson claims he “felt like a five-year-old holding onto Hulk Hogan” during his struggle with Brown. Wilson also claims Brown had the look of “a demon.” All of this, perhaps unconsciously, reveals the deep-rooted fear that persists in many whites of blacks as some kind of inhuman, super-powered savage. But none of it exonerates Wilson from wrongdoing. Few details of the altercation are as important as this: Brown had no gun, and Darren Wilson shot at him at least seven or eight times, including one shot to the top of the head while Brown lay on the ground. Darren Wilson had no interest in subduing Michael Brown non-lethally; he wanted to kill him.

Sadly, that doesn’t mean Wilson acted in a manner unbecoming of a police officer. The grand jury’s decision not to indict, while disappointing, is not surprising. Grand juries move to indict 99.99 percent of the time, but if anyone is going to escape, it’s law enforcement. According to a statement released by his attorneys, Wilson “followed his training and followed the law” in the shooting of Michael Brown. If that is true, it’s probably the most damning indictment there can be of the law and police protocol in America.

Also disappointing, yet entirely predictable, are the reactions of Ferguson protestors, many of whom have been on the ground since the shooting took place in August. It’s a thankful thing that justice isn’t meted out by mob rule in America, but it’s a travesty that Wilson won’t have to face his accusers. Instead, the accusers have turned their feelings of angst and injustice toward their own community, rioting, looting, setting fire to local businesses and firing guns.

Such violence is widely condemned, and rightly so – but also understandable. Pleas for a calm, peaceful response came from news commentators, Michael Brown’s family, and even President Obama. The oppressed are frequently told to bear their burden with quiet dignity. Yet it’s difficult to contain one’s feelings inside an emotional box, especially an emotional box that those who’ve wronged you want to prop up for you. We aren’t dealing with a failed ballot measure or some other bureaucratic proceeding; this is a murder. As others have pointed out, the scene in Ferguson looks little different than any major American city might after a big football game; at least Ferguson’s grievances are real.

Rioters in Ferguson looted a local liquor store. Several businesses burned during the rioting, which also saw the destruction of two police cruisers.

What we’re seeing in Ferguson is ugly and unpleasant, but it’s a desperate, raw reaction to police violence and impunity. All of the focus, even from much of the sympathetic media, has been around the failure of Ferguson’s protestors to react in the prescribed, restrained, nonviolent manner expected of those who’ve been dealt a monumental injustice. But there is extraordinary violence in the United States, and we must condemn it at all of its sources.

Police and politicians began the war on America’s streets. They declared a costly, deadly, pointless war on drugs. They turned the American dream from “a car in every garage” to “a tank in every police department” and procured military-grade weaponry from the Pentagon. They wrote the protocol that Darren Wilson allegedly followed – protocol that allows for deadly force to be used whenever an officer feels like he isn’t in complete control of a situation. Police determine when a peaceful protest graduates to an unlawful assembly and then attack it with tear gas, tanks, rubber bullets, riot shields, nightsticks, and whatever violence they feel they can get away with using. In fact, it’s this very type of scenario that started the whole Ferguson fiasco: Michael Brown was somewhere Darren Wilson didn’t want him to be, and Darren Wilson couldn’t have his authority defied.

America is not safe from its police force. Police in the U.S. abuse, harass, beat up and even kill people routinely. There is next to no accountability for any of it. A blue code of silence prevents good officers from incriminating the bad. Courts accept police testimony as absolute truth. Little statistical analysis is available on the number of deaths that result from interactions with the police, but those who follow such stories know they’re numerous. Police have become more militarized, hostile and quick to draw their guns than ever before. It’s a toxic environment that led directly to Brown’s needless execution, the ongoing protestor/police standoff in Ferguson, and the solidarity marches popping up around the nation.

The pain of Michael Brown’s family and the sense that a police officer killed an unarmed teenager without justification is bad enough, but the racial components are disturbing. The violence and destruction brought out the worst in many of Ferguson’s protestors, but it was a physical manifestation of the devastation, hopelessness, second-class treatment and feelings of being sidelined that continue to plague black Americans. As Vince Warren of the Center for Constitutional Rights said in an interview with Amy Goodman, “Let’s not think about this as these people are burning folks here or these people are throwing rocks here… that is the representation of the state of our democracy for black folks in America. It is messy, can be ugly, it’s full of passion but people should not turn away from it. People should not try to tamper down and control it. People should begin to understand that if that is what we are dealing with, if that is where we are as a society, we need to think about structural changes in order to change the status quo.”

No one can argue that the reactions in Ferguson were appropriate or, even less, constructive. Communities need to stand together against state oppression and injustice, not tear themselves apart. But as sad and misdirected as the violence is, to look at it as separate from state violence, police militarization, and the utter failure of the judicial system misses the point entirely. The appropriate way to look at the Ferguson violence is not, “Wow, look what these crazy people are doing,” but, “Wow, what have we done as a society?” Unfortunately, something tells me Darren Wilson and the white, police-friendly establishment that protected him aren’t honest or reflective enough to use that lens in examining the carnage they’ve wrought.