War, from a last resort to the first

Last week, the United States – along with five other powerful nations – reached an agreement with Iran on its nuclear program. In exchange for the lifting of some sanctions, Iran will diminish its nuclear ambitions and agree to international inspections, marking a mild diplomatic milestone. Naturally, for conservatives, this makes it an apocalyptic disaster.

Appearing on CNN, former Arkansas Governor and potential presidential candidate Mike Huckabee said Iran couldn’t be trusted, adding, “We’re expecting good fruit from a bad tree.” Illinois Senator Mark Kirk compared the deal to Nazi appeasement, saying it dooms the Middle East to another major war “Which we all know is going to end with a mushroom cloud somewhere near Tehran.” And, despite Obama’s insistence that the deal blocks Iran from building a nuclear weapon, Rush Limbaugh believes the deal was struck because Obama wants a nuclear Iran to “balance Israel.”

To listen to conservatives speak of the issue, it sounds like this diplomatic accord places the U.S. closer to war with Iran than ever before. Almost all the conservative discussion on the issue has presented it as an Obama Administration/Iran deal in which Obama was outfoxed, leaving out entirely the roles of Britain, France, Germany, Russia and China. The deal is far from perfect, but the simple act of engaging a country civilly, especially with half of the country’s politicians raving like lunatics, is something hopeful.

All this speaks to an interesting evolution in American war propaganda. As the media has come to be divided explicitly along party lines, there is an emerging distinction in the way war propaganda is carried out by the two sides. With Obama, there’s less emphasis on selling war to the public and more on simply keeping the public in the dark. He’s also much less emotional than his predecessor, talking in terms of strategic interest whereas Bush tried selling the Iraq invasion partly by reminding us, “[Saddam Hussein] is the guy who tried to kill my dad.” The so-called liberal media largely follows Obama’s tenor. 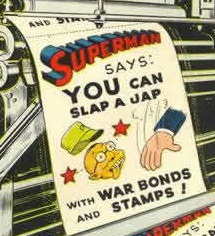 Messages like this one were front-and-center in wartime American comic books.

But conservative media is still the place where America is The Avengers. The rest of the world is filled with despots like Dr. Doom and the Mandarin who sit around doing little else but plotting ways to kill us. In that world, war is presented as a battle between good and evil, not an ugly means to achieve a strategic interest. It’s rather like World War II propaganda which, to continue the metaphor, was heavily reinforced through comic books.

Typically, an essential component of this kind of narrative is that the good guys don’t want to jump into conflict, war and violence. It’s essential to their goodness that they would rather keep the peace. We were dragged into World War II by Pearl Harbor. In Vietnam, we had to protect a democracy from the steamroller of communism. We don’t want war; we are driven to it by the evils of the world. Military and political leaders from Winston Churchill to General Wesley Clark have echoed this sentiment, with Churchill famously quipping, “To jaw-jaw is always better than to war-war,” meaning conversation is preferable to violence.

The “last resort” concept of war has probably never been taken seriously by leaders, but so universal a moral standard is it that they at least felt the need to pay it lip service. Now, it is mainstream Republican Party policy to instigate conflict at every opportunity. In 2007, Senator John McCain made headlines for singing “Bomb Iran” to the tune of “Barbara Ann” by the Beach Boys. Forty-seven Republican Senators tried to sabotage the Iran deal by writing a letter strongly suggesting that a future Republican president would renege on it. The right-wing National Review lamented the fact that we struck a deal with Iran instead of bombing them, declaring in a headline, “Force should not be a last resort.”

Of course, conservative media isn’t actually driven by a sense of justice, not even one as good as may be derived from a comic book. It is driven by the enormous wealth of those who profit off of mankind’s greediest and most destructive impulses. For such people, war is life. Building bombs, bombers, guns and body armor, then using that equipment to secure foreign oil interests, is how their world runs. This namby-pamby treaty-signing is bad for business.

The conservative response to these allegations would be a counter-charge of naivety. They claim sneaky Iranians have been wringing their evil hands in anticipation of this opportunity to build nuclear weapons and plunge the world into a nuclear war. Such a view dismisses Iran as a nation of human beings whose primary interest is their own and their families’ own well-being. Iran is not so pathological as to prefer being invaded by NATO, nuked by Israel or overrun by ISIS to complying with an international accord.

Even if it looks like a scary coalition, anytime the USA, Germany, France, England, Russia, China and Iran are on the same side it’s a positive moment in terms of peace. What would have been ideal, of course, is if Iran decided to build windmills and solar panels instead of a nuclear reactor – but anything that reduces mankind’s prospects for world wars should be applauded. To have any other reaction is pure psychopathy, and it surely isn’t treating war as a last resort.