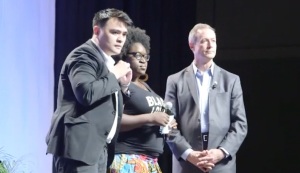 Ordinarily, the Netroots Nation convention – an influential, annual gathering of progressive politicians and activists – might not receive much press outside of progressive media. But this year, a group of #BlackLivesMatter activists made headlines when they challenged Democratic presidential candidates, notably Martin O’Malley and Bernie Sanders, to address issues of police brutality and systemic discrimination against black Americans.

Questions raised by the activists are important. They called out the names of black citizens murdered by police and insisted the politicians say their names as well, an exercise in basic recognition of humanity. And though neither O’Malley nor Sanders seemed prepared to deal with the interruptions, to their credit they didn’t talk over the activists or have them ejected. It’s not hard to imagine that such a disruption at a GOP or Hillary Clinton event would have gone differently.

Alleged indifference by white progressives to the issue of racial inequality has been used against Sanders since the beginning of his campaign. Inspired by the awkwardness of the encounter, a hashtag, #BernieSoBlack, began trending on Twitter and called into question Sanders’s credentials on race.

This is exactly what a town hall is supposed to accomplish. Speaking to the National Association of Latino Elected and Appointed Officials later the same day, Sanders revisited the race question and asked, somewhat plaintively, “How do we best deal with racial discrimination? Tell me – I’m asking questions here.” His comments betray two things: first, that he isn’t very up-to-date with the #BlackLivesMatter movement. Second, and more encouragingly, he is sincere in his opposition to racism.

It would have been interesting to see how Hillary Clinton would have responded to the protesters. After the Charleston shooting, Clinton’s remarks on race were widely praised. But she didn’t offer much, saying the nation “must tackle this challenge with urgency and conviction… I am not and will not be afraid to keep fighting for common sense reforms.” As usual, her statement is as vague as any that can be made. 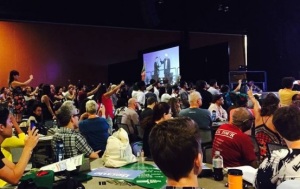 Clinton has been biding her time on this presidential run for eight long years and has thus far been running an extremely cryptic and vague campaign. Sanders, her chief opponent in the primaries, is frequently asked about her positions in media appearances because she simply doesn’t reveal them. Her strategy is pure marketing, and marketing isn’t something you do to an audience you respect – it’s what you do to an audience you want to manipulate. Clinton has spent almost $1 million on polling to determine how best to craft her message. Sanders has spent nada to date.

If he had done a little more polling and research, though, his campaign might have been better equipped to address the concerns of #BlackLivesMatter. His home state of Vermont is, rather amazingly, 95 percent white. It’s understandable, given that his primary purpose as a legislator for the last 30 years is representing his state at the national level, that he isn’t as in touch with the issue as he should be. Now that he’s a presidential candidate, it’s incumbent on Sanders to become better educated about a broader progressive base.

The push between #BlackLivesMatter activists and Sanders is that Sanders seems to think the racial aspect of America’s ills will work themselves out once the economic inequalities are addressed. As Roderick Morrow, creator of the #BernieSoBlack hashtag, noted, “[Mike Brown] was on his way to school in a couple of days [when he was shot by police]. I don’t think that [a lack of jobs] was necessarily the problem in that situation.”

Both men have points to make in this regard. Part of the reason for Ferguson’s antagonistic police presence is that low-income, minority-heavy communities are where police like to wage their War on Drugs, making such areas a hostile battleground between citizens and law enforcement. The other part of the problem is that the racist, poorly trained officer who shot Brown saw the unarmed 18-year-old as a hulking, demonic, unstoppable monster.

Sanders took a good first step by asking what should be done about race. His primary focus, however, is on the economy and the environment. What he will hopefully realize is that his positions on both those issues will only be enhanced by emphasizing the racial justice aspect of them. For instance, it may come as no surprise that the cheapest, least desirable properties – such as those near factories and refineries – are disproportionately occupied by low-income minorities, who must bear the brunt of industrial pollution.

And it isn’t as though Sanders been totally absent on race. One of his most common refrains is that real unemployment for African-American youth is more than 50 percent. He spoke out harshly about police militarization, excessive use of force, and racial discrimination regarding the death of Sandra Bland. A centerpiece of his campaign is using taxes to fund higher education for all Americans, which will be a boon to disenfranchised groups – though Sanders ought to say more about funding primary education, too, to equip those kids for college.

Progressive policies will go a long way toward helping marginalized communities. Those who live and deal with racial issues every day, however, rightly demand something more. Activists pushing Sanders in this direction ought to enable him to build the broadest coalition of progressives this country has ever seen. It would help him, minority voters, and the whole nation if he did as much as possible to strengthen that coalition by ensuring all parts of its voice are part of the campaign.