Planned Parenthood attacks are the pettiest of politics

Planned Parenthood has been cleared of wrongdoing on the federal level by the very congressman who was their most aggressive opponent, but the group remains hounded at the state level. In Texas, Republican leadership is cutting Medicaid funding to the nonprofit reproductive healthcare provider. Even though they provide a long list of medical services, the campaign against Planned Parenthood is all about conservative fundamentalism on the issue of abortion.

Texas governor and former attorney general Greg Abbott claims the state has evidence that Planned Parenthood broke federal law by altering “the abortion procedure in order to preserve tissue.” Specific evidence has yet to be laid out and made public, but even if it exists it’s terrifying that a democratically elected governor can take away his constituents’ access to healthcare without a vote or telling them exactly why.

The wild-eyed hysteria of conservatives like Glenn Beck and Carly Fiorina who compare the clinics to death camps for the unborn deserve no attention in the political agenda. But such conspiratorial ravings make it to the highest levels of office. Texas Lieutenant Governor Dan Patrick said Planned Parenthood doesn’t “do anything except profit from killing babies and then selling body parts of those aborted babies.”

Such a claim couldn’t be further from the truth. Abortions account for about 3 percent of the services Planned Parenthood offers. They also provide cancer screenings, STD testing, contraceptive services and family planning, all in much higher numbers than abortions. Defunding Planned Parenthood would have a disproportionate effect on the low-income women who depend on it, particularly in Texas which consistently ranks near the bottom nationally for healthcare and outcomes. 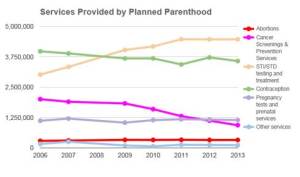 A Planned Parenthood chart shows the services they perform over time. Abortions remain at the bottom of their offerings.

Actually, so important are the services Planned Parenthood offers that defunding them outright would be far too dangerous even if they are breaking certain laws. The worst claims that can be taken with any seriousness at all are hard to get fired up about. It’s unclear what altering “the abortion procedure in order to preserve tissue” means, exactly, but in a way it sounds like a good thing when the medical potential of fetal tissue is considered.

Highly edited and widely debunked “sting” videos released by the so-called Center for Medical Progress have been at the crux of the movement to defund Planned Parenthood. In the most famous video, activists disguised as researchers talk to Dr. Deborah Nucatola of Planned Parenthood over lunch about the logistics and shipping costs of donating fetal tissue with who she thinks are researchers. Misleading editing makes it look as though Nucatola is talking about profiting off the tissue, though in reality she’s talking about reimbursement on the expensive shipment of medically sensitive material.

In response to the manufactured scandal, Planned Parenthood announced it would stop seeking that reimbursement. A representative from the Center for Medical Progress said the reversal proved their point that “Planned Parenthood incurs no actual costs, and the payments for harvested fetal parts have always been an extra profit margin.” It’s unclear who the Center for Medical Progress thinks is participating in the black market exchange of big money for baby parts, or why.

Despite the now widely acknowledged deception of the videos, they continue to be used by conservative media and politicians as evidence. Even those who acknowledge the video’s misleading substance want to attack Nucatola for being so cavalier when discussing abortion. This is probably the stupidest attack of all. Abortions are medical procedures. In communities where the chopping up and examination of human anatomy is part of daily life, abortion may not be given the funereal tone pro-lifers expect.

But it is striking that the same people who are aligned politically with protection of the fetus are the ones making it difficult for families to access childcare, nutrition supplements, education, and living wages. For instance in Texas, thousands fewer women have access to healthcare since the state took over the Texas Women’s Health Program. Are these people so sick they not only must engineer this world but force the unborn to endure it as well?

This attack is all about a fundamentalist anti-abortion agenda. But like it or not, abortion is legal. And while it’s worthwhile to discuss when an appropriate abortion cutoff is, it’s totally ridiculous to defund Planned Parenthood over doing something that’s legal. The millions of people who rely on Planned Parenthood for other services are written off or downplayed. Calling oneself “pro-life” is an obscene corruption of language if that concern for life stops when a child leaves the womb.

Politicians continue to make targets of women, minorities and the poor. Fortunately, resistance is strong. On October 24, activists are planning a demonstration inside the Texas state capital in Austin. Anyone in the Austin area can do a good thing by showing up and lending their voice. Texans won’t surrender their healthcare to Governor Abbott without a fight.

One thought on “Planned Parenthood attacks are the pettiest of politics”