How the Sanders campaign can increase its momentum 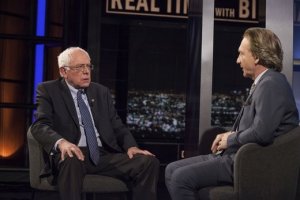 With over a million small contributions from 700,000 ordinary Americans, the Bernie Sanders campaign has remarkable popular support. He’s accomplished this despite some notable handicaps: he self-applies the label democratic socialist; he refuses to take money from Super PACs; and he’s up against Hillary Clinton, a member of one of America’s royal families whose nomination in the Democratic primaries is often treated as inevitable. As inspiring as it is to see him doing well, there are some things his campaign could do even better.

Sanders’s best performances are in the most populist forums, like town halls and on the internet. He has broken attendance records at his rallies, filling arenas like a rock star. After the first Democratic presidential debate, Sanders crushed all the competition in one online poll after another and enjoyed the most Google activity of any candidate. His message is clearly resonating when it’s delivered directly to the people.

Problems are introduced when that message is filtered through secondhand reporting or the constraints of a 4-minute TV interview. In a recent appearance on Real Time with Bill Maher, Maher challenged Sanders to sell the concept of socialism to the American people. Sanders used his now-familiar statistics and comparisons to other nations, but unfortunately these don’t directly address the issue, nor are they likely to endear those who resent America being compared unfavorably to other countries.

For 50 years, Americans viewed the world’s central struggle as between the forces of good, capitalism, and the forces of evil, socialism. The thought of now electing a socialist must seem utterly perverse to many of them, even though America has always incorporated socialist programs. Something more than statistics needs to be offered to get them on board with the campaign.

It shouldn’t be that hard to do. On his most important issues, like universal healthcare, taxing the rich and funding tuition-free college, the majority of Americans – Republican as well as Democrats – agree with Sanders. When the policies are labeled socialistic is when Americans start to shy away. Americans’ problem with socialism is not the policies as much as it is the word itself. 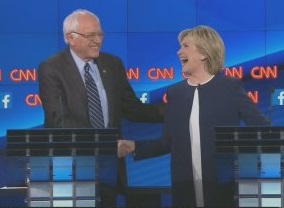 Sanders’s refusal to attack his fellow candidates lead to an iconic moment in the first debate, seen as a win for Clinton, when Sanders said the country was tired of hearing about her “damn emails.”

Next time Sanders is asked a question about socialism, he should resist the temptation to trot out a statistic about the 1 percent or talk about Scandinavia. Instead he could assuage American fears by pointing to popular socialist programs already in place here, like Medicaid and Social Security. He could speak to the value of public funding for matters that are too important to entrust to a volatile, greedy and predatory market, like healthcare and education. More theoretical and philosophical arguments could help his campaign.

Establishment media has been perhaps his biggest enemy so far, often dismissing the campaign as unviable or ignoring it entirely. Despite Sanders’s performance in their own online poll, CNN declared Clinton the winner of the first debate. Her poll numbers shot up, particularly in Iowa where she turned a dead heat with Sanders into a 20-point lead. Some of this can be attributed to people who may not have even watched the debate hearing that Clinton won it.

One of the defining features of the Sanders campaign has been his refusal to run negative attack ads. His campaign’s first TV spot mentioned none of his opponents by name. Meanwhile, Clinton hasn’t refrained from the personal attacks, insinuating a charge of sexism against Sanders. It may be time for Sanders to not necessarily go on the attack, but to become aggressively defensive.

On almost any issue, Clinton can only attack Sanders from the right. This bodes well for him securing progressive votes in the Democratic primary. But personal attacks are often the hardest to recover from. Clinton may have supported the invasion of Iraq, often considered the worst crime of the century so far, but if the label of “sexist” sticks it’ll be hard for Sanders to shake unless he becomes proactive in addressing it.

No candidate offers progressives more to like than Bernie Sanders. It’s no surprise, then, that the campaign is building an impressive network of activists who support a broad range of progressive causes. Sanders has stressed this, but it bears repeating: This movement must continue to do work long after the presidential election, whether 2016 brings us President Sanders or not. Even if he is elected, he won’t be able to accomplish much if the movement disperses after Election Day.

Sanders has already done enormous good in raising important progressive issues. There’s still plenty of time before the primaries to do even more. The campaign is dynamic, in touch with popular struggles, and has done a noble job maintaining its honesty and integrity. He has demonstrated a willingness to listen to constructive criticism, focusing on minority support after a speech was interrupted by Black Lives Matter activists. It’s crucial this movement stays alive and seizes every opportunity to gain momentum.

One thought on “How the Sanders campaign can increase its momentum”