Sanders is more than a candidate, he’s an opportunity 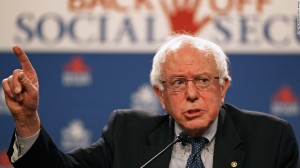 Vermont Senator Bernie Sanders, a long-serving independent, wants to bring all Americans along for his political revolution.

Things are going well for Bernie Sanders’s presidential bid. Over the last two weeks, the Vermont Senator won the endorsement of the highly influential progressive group MoveOn, received kind words from Vice President Joe Biden, had an extremely strong showing at the most recent debate, and is now polling within striking range, if not ahead of, Hillary Clinton in the key early primary states of Iowa and New Hampshire.

Against enormous odds, it’s really starting to look like Sanders has a chance. Largely dismissed when he announced his candidacy, over the course of his campaign Sanders has excited a bold movement into existence – a movement that America desperately needs.

Calling Wall Street speculators criminals, saying the economy is rigged against working people, and accusing politicians of being in the pocket of big corporations are all familiar notions to progressives. Such rhetoric would have fit well on the placards of Occupy Wall Street. But Occupy demonstrators were teargassed, doused with mace and taken to jail; sharing their talking points is unheard of from serious presidential candidates.

Nonetheless, Sanders is undeniably a serious candidate now, thanks in large part to his enthusiastic grassroots supporters. Volunteers for the Sanders campaign have done the thankless political work of phone banking and collecting signatures. They’ve also gotten more creative, as in their nationwide “light brigade” campaigns. Sanders has also received more individual donations, mostly in small amounts, than any other candidate at this point in any election in history.

It’s important for supporters to do everything they can to put Sanders in the White House. But when Sanders speaks of a “political revolution,” he is calling on Americans to sustain this level of enthusiasm and political activism beyond the election, regardless of its outcome. 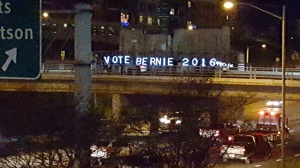 The Bernie Light Brigade holds their signs for rush hour traffic over Austin, Texas’ busy I-35.

One of the most common criticisms of Sanders is that Washington is too bogged down by corruption and obstructionist congressmen for his lofty proposals to ever see the light of day. An education bill that makes college tuition-free through a tax on Wall Street speculation, for instance, just can’t be passed in the current political climate, according to the cynics.

Unlike other politicians, Sanders not only recognizes this but admits it and, indeed, emphasizes it. That’s why he uses the language of political revolution and tells his supporters he’ll need their help beyond Election Day. If he’s going to institute healthcare as a universal right, secure free public college tuition, reform the campaign finance system, end subsidies to big oil, and launch an infrastructure stimulus program, he’s going to need his constituents to place pressure on the interests he knows full well will resist him.

Contrast this with Hillary Clinton. In response to Sanders galvanizing the base, Clinton portrays herself as the pragmatic alternative – someone who tempers progressive aspirations and touts her ability to cooperate with the elites in achieving minor, incremental reform. This distinction was best summed up in a Facebook post by economist Robert Reich following the most recent Democratic debate.

“If you assume Washington is not changeable and that the vicious cycle of wealth and power dominating our politics and economics is unalterable, Hillary’s experience is relevant; she will make a first-class president for the system we now have. But if you believe Washington must be changed, and that the system can be altered for the benefit of the many and not the few, Bernie’s leadership is more relevant; he is heading up a political movement.”

Liberal disillusionment set in almost immediately after President Obama was elected. Despite the enthusiasm of his supporters in 2008, he went into the White House as any other political figure does. From his earliest days in office, Obama set about trying to appease the unappeasable, an obstructionist Congress and their corporate backers. He failed to seize the progressive mandate the nation had given him.

Sanders and his supporters are far less likely to miss this opportunity. But Sanders will, of course, meet resistance. It will come at him, as it has already been during his campaign, from every conceivable angle – big money interests, the congressmen who represent those interests, and a news media devoted to establishment protectionism that simply can’t understand this political revolution, as a bewildered Boston Globe editorial by Michael Cohen amply demonstrates.

When asked about how he can push his populist ideas through a Congress that is motivated by corporate interests, Sanders pledged to keep his supporters engaged. Elected representatives will have to “look out the window and see a million young people demonstrating and marching in Washington saying, ‘You know what? We want to see affordability in college.’” A Sanders presidential run would also necessarily open up our national dialogue, enabling more progressive candidates to enter the Congress on the crest of his momentum.

The problems we face are beyond political and require more dramatic solutions than the current system allows. Unaffordable healthcare and education, runaway inequality, fossil fuel dependence, police militarization, and growing resentment of minorities are not just issues; they’re crises. Putting patches on them here and there – and only after those patches are approved by an obstructionist Congress – is far too modest an approach.

At this point, Sanders’s political revolution is the only hope we have of meaningfully addressing these problems. He doesn’t just have the best talking points; he represents an opportunity to turn it all around at a crucial moment. Americans are lining up by the millions to help get him there, but to guarantee success the revolution must remain active and continue to agitate for change long after the inauguration of President Bernie Sanders.