Why the ‘pragmatist vs. idealist’ framing is so cynical in the Democratic primary 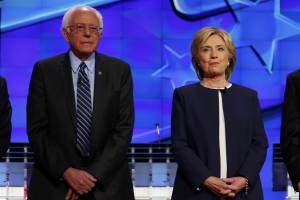 The media has adopted a narrative of Sanders as the wild-eyed idealist and Clinton as the pragmatist.

On Monday the first official leg of the presidential nomination process took place in the Iowa caucuses. As results came in throughout the night, the Democratic race was as close of a nail-biter as can be imagined. At the time of this writing, Hillary Clinton maintains an extremely slim lead of less than half a percent over Bernie Sanders. Whatever the outcome this showing is undeniably a boost to Sanders’s momentum, making it clear he’s got a shot at winning the nomination overall.

With an intense race still to be run, a narrative has been forming over the last couple months. It holds that Hillary Clinton is the pragmatic, sensible choice for Democrats – a centrist with the political clout to make moderate changes. Sanders, meanwhile, is a naïve idealist proposing lofty, transformational reforms that will never see the light of reality. Better, then, that voters choose Clinton.

There’s a subtext in this analysis that often goes unspoken: It’s as though everyone who believes it is saying, “Sure, we would like to see Bernie’s policies implemented, but we just know it can’t happen.” For a presidential candidate especially, this is a depressingly cynical tack to take, and certainly no example of strong leadership.

Who says Americans can’t have universal healthcare, free college tuition, a living wage, paid family leave and an environmental consciousness? Plenty of other countries do. Most Americans want these things. However banks and wealthy elites, who have given so many millions to the Clinton family over the years, don’t; nor do their paid representatives in the gridlocked Congress. But the American people need not be beholden to those interests.

Even to get to this point shows how far Sanders’s grassroots campaign can come. Cynicism can’t be permitted to keep it down.

Achieving these policies won’t be easy. As the cliché goes, nothing worth doing ever is. But Sanders is suggesting something that sets him apart from every other candidate. He doesn’t just use the royal “We” in speeches; he wants this movement to stay mobilized and politically active long after the election, calling on people to become active in the political process.

Of course Republicans in the House won’t work with him. They won’t work with Clinton either; Republicans are in Congress solely to obstruct. But with the unified chorus of a million strong voices at his back Sanders can send Congress a message it can’t ignore. As with victories in civil rights and labor, the political goals progressives want must be struggled for through on-the-ground political activism. Sanders makes no claim of being able to hand them down from above.

Attacking Sanders for not being able to accomplish anything is ridiculous anyway. He actually has a remarkable legislative record, both as mayor of Burlington and as a congressman. As mayor Sanders was extremely successful and popular among his electorate, standing up to big business and revitalizing the economy at the same time. In Congress he became a prolific legislator by attaching amendments to bills with bipartisan support.

Even if not every proposal becomes reality right away, it’s also disingenuous to suggest Sanders wouldn’t accomplish anything incremental just because he’s pushing for something greater. In fact, it doesn’t even make sense. If anything his increments will be larger; imagine the difference in the end result of a compromise with Congress between Sanders pushing for a $15 minimum wage and Clinton pushing for $12.

Take space travel as a metaphor. When it comes to exploring outer space, humanity has limitless options. We can construct a self-sustaining interstellar colony and spread ourselves out to the furthest reaches of the cosmos. We can meet alien civilizations and unlock the mysteries of black holes, wormholes, dark matter and the quantum realm. Or we can sputter out to the nearest rock and wave home.

Any of these options are good in and of themselves. But in the Democratic primary, there is one candidate who only seems willing to indulge that last, safest, easiest option. Sanders wants to fight for the more ambitious goals. There’s a famous inspirational quote attributed to Norman Vincent Peale that’s pretty hokey, but it applies here: “Shoot for the moon. Even if you miss, you’ll land among the stars.”

There’s just too much at stake, too many things going wrong and getting worse quickly, for the “incremental reform” approach proposed by Clinton. For Americans fed up with a rigged economy and corrupt politics Sanders isn’t just the idealistic choice, he’s the one who, with our help, is more likely to get things done.