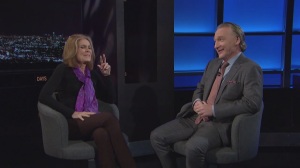 Steinem apologized for remarks she made on Real Time disparaging young, female Sanders supporters. In 1996 she declared Sanders an “honorary woman.”

When serious coverage of the 2016 presidential race began last year, pundits assumed the general election would come down to Hillary Clinton and Jeb Bush. Such a matchup between two families that have dominated presidential politics for 30 years would be as establishment-friendly as could be imagined. Instead, both parties’ nominations have been disrupted by insurgent candidates who are not beholden to classic Washington interests.

Both of these candidates, Bernie Sanders and Donald Trump, have faced strong resistance from their party’s establishment. Republicans, however, seem more willing to praise Trump for shaking things up; Democrats are less amused at seeing their establishment rankled. With Sanders gaining real momentum with his primary performances, the Clinton camp and its supporters have been escalating an attack that’s been in play since the beginning of the race: accusing opponents of sexism.

Last week alone feminist icon Gloria Steinem, former Secretary of State Madeleine Albright, and former President Bill Clinton tried placing support for Sanders in sexist terms. Allegations come in two varieties. One is the disparaging label of “Bernie Bros” – itself somewhat sexist – which insinuates that Sanders supporters are millennial frat guys with all the flaws of that archetype. The other charge is simply that not supporting Hillary Clinton is sexist period.

Albright reiterated prior to the New Hampshire primary her famous maxim that “there’s a special place in hell for women who don’t help each other” – referring in this case to women who don’t support Clinton. In an appearance on Real Time with Bill Maher Steinem made a surprisingly sexist remark of her own, suggesting that young women were attracted to Sanders’s campaign because, “When you’re young, you’re thinking, where are the boys? The boys are with Bernie.”

None of these charges have any substance to them, appealing to tribalism rather than political morality. For a party that has tried to distinguish itself from Republicans by debating real issues, these baseless allegations of sexism are a ridiculously cheap political ploy from the Clinton camp. It’s not just rogue supporters; Hillary Clinton herself has made insinuations along the “Bernie is sexist” line.

Sanders responded to Bill Clinton’s “Bernie Bros” allegation by saying he didn’t want the support of anyone who was sexist.

At the first Democratic primary debate in October, Clinton was asked about being an “insider” in a “year of the outsider.” Her response was, “I can’t think of anything more of an outsider than electing the first woman president.”

Woman or not, Hillary Clinton is pretty much the definition of Washington establishment. To say otherwise is like saying Queen Elizabeth is not part of England’s royalty. Clinton is a former First Lady, has run for president before, and together with Bill has taken in more than $150 million in speaking fees from Wall Street. All of these are much clearer indictments of a person’s “insider” status than their sex.

Perhaps her best claim to being an outsider is that she has been on the receiving end of harsh and unfair treatment from the “vast, right-wing conspiracy.” But just because a person is hated by a group doesn’t exonerate them from establishment ties. Ted Cruz, for instance, is widely disliked by his own party but is still very much part of the Wall Street, fossil fuel and Christian conservative establishments.

Clinton’s candidacy is being driven by an incredible ego. She clearly sees herself as a historic figure. In many ways, of course, she is and ever will be. But her lust for the presidency on such self-aggrandizing terms is not what the country needs. Frankly it’s somewhat Trump-like. We are long overdue for a female president. Such a moment would have positive reverberations throughout the social-political landscape. And it will happen. But it doesn’t need to be Hillary Clinton, particularly not when Sanders is a viable candidate who is far superior on the issues that matter to progressives.

The 2016 election will be historic. Exactly what kind of history will be made, however, is up to voters. We’ve come a long way from the earliest forecasts of an establishment vs. establishment general election. Trump is likely to be the Republican nominee, meaning the next president will likely be a Democrat. Overconfidence has plagued Clinton’s campaigns before, however, and Bernie Sanders fares better than she does against most GOP candidates.

Assuming the polls hold up, the country’s real choice is between a woman from the establishment vanguard who would be our first female president or a true populist whose New Deal-inspired politics are precisely what our wayward nation needs. At this delicate phase of civilization, history demands we do more than fill a quota, even an important one. It demands we keep fascists out of office and repair as best we can our broken economy, infrastructure and environment. For these goals Sanders is the better candidate.