How the media makes reality – and may make Donald Trump president 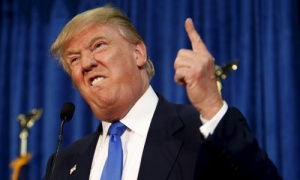 This may one day be a painted portrait in the White House.

It’s been said that the far right is reaping what it sowed with Donald Trump. For eight years their cabal of media and politicians unrelentingly attacked President Obama for everything from inviting rappers to the White House to purposefully destroying America. They fomented racial hostilities and deep paranoia to create the atmosphere in which Trump now thrives. But if Trump actually becomes president it will be the mainstream media’s reckless pursuit of ratings that puts him there.

From the beginning of his campaign Trump has been a gift to networks from the ratings gods. The first Republican debate drew nearly 24 million viewers, setting cable TV records for the most-watched presidential primary debate ever, the most-watched FOX News broadcast ever, and becoming the ninth-most-watched broadcast in cable history behind eight college football games.

For years Trump was given a safe, weekly forum on Fox & Friends. When Trump appeared on The O’Reilly Factor to discuss his planned no-show of a FOX News debate, O’Reilly scored the evening’s biggest ratings. Hannity, too, got his best ratings of the year from a Trump sit-down. The night of the boycotted debate Trump held a rally expressly to compete with it. Obligingly, CNN and MSNBC showed up with cameras.

No doubt the most shameless passenger on the Trump gravy train, though, is Morning Joe. During yet another boycott – this time of CNN’s so-called town hall on February 17, itself an embarrassing spectacle in media pandering – MSNBC gave Trump a town hall of his own with hosts Joe Scarborough and Mika Brzezinski. A microphone the three apparently didn’t know was recording caught the hosts sounding especially chummy with the presidential candidate.

The event itself was the usual Trump showboat, but it’s the leaked audio that is the real scandal. In it, Trump praises Morning Joe for depicting him as “almost a legendary figure” during coverage of a rally. Scarborough massages Trump’s ego by talking about his poll numbers. While Brzezinski wonders out loud whether to ask him about mass deportations Trump says, “Nothing too hard, Mika.” Trump tells the hosts to “make us all look good” and mentions the ratings he’ll bring.

Three amigos talk about the 2016 race.

Such brazen flouting of a profession’s most fundamental ethics would see any lawyer disbarred or any doctor stripped of his license. It should be cause for the removal of Trump as a candidate and Scarborough from the airwaves. But such chumminess in political media is common, if usually better suppressed.

Trump’s kid-gloves treatment exemplifies what has long been a criticism of mass media: that it relies too heavily on “official” sources for breaking news and ratings to risk offending those sources by being critical. With Trump this is doubly the case. Not only is he a ratings sensation, he’s wildly reactionary to even the slightest criticism, regularly threatening boycotts and accusing reporters of covering him unfairly.

Of course Trump is criticized by the media, but rarely to his face. Television personalities don’t often push him even when he’s telling one of his many lies or fanning the flames of racial and ethnic hatred. It’s this deference to official sources that drove America to commit the century’s greatest foreign policy tragedy, the 2003 invasion of Iraq. Now it’s threatening to give us President Trump.

There’s no doubt Trump has benefited enormously from the media chasing after his every word. For one thing, it’s allowed him to save money on television advertising, often one of the most important expenditures in any political campaign. New York Times reporter Nicholas Confessore recounts making this very point on MSNBC when the network abruptly “demonstrated it by cutting to a Trump rally in Atlanta.”

And all the attention on Trump has come at the expense of far more credible candidates who the American people deserve to hear from. In December it was reported that Trump received 23 times more network news coverage than Democratic candidate Bernie Sanders. ABC’s World News Tonight aired 81 minutes of coverage for Trump and less than one minute for Sanders.

Sanders has closed the gap with Hillary Clinton in national polls and is galvanizing young voters by the millions. He’s trailing in the DNC primary by only one committed delegate and is winning the popular vote by 51,000. Yet the media deflates Sanders’s support and engineers a false reality by declaring his campaign dead – all so Americans can get back to hearing about Trump and the protester he wants to punch in the face.

On some level, people vote with their remote controls. But when all the networks are covering Trump there’s no channel to turn to for Sanders. News media is supposed to give Americans what they need to be informed. It’s irresponsible and neglectful of their hallowed duty to present the 2016 presidential race as being all about one man – especially an unrepentant bigot who is viewed unfavorably by a staggering 60 percent of Americans.

As long as Trump keeps the media following his dog-and-pony show he’s able to avoid close scrutiny on his truly villainous proposals: that we should murder the families of terrorists; that we should torture even if it doesn’t work; that we should discriminate based on religion; that we should round up and deport millions of people who have made their homes here.

Neglecting the humanitarian consequences of these medieval ideas – their violations of the Geneva Conventions, the Constitution and mankind’s most basic morality – is not some noble journalistic pursuit of objectivity. Trump is openly eager to take advantage of the most poorly educated Americans and the media consistently delivers him to that audience on a platter. The far right may be responsible for creating Trump the candidate, but it’s the mainstream media that is responsible for Trumpmania.

Whether he wins or not depends largely on how mobilized Democrats are in November. But Trump has already done enormous damage by releasing the valve on America’s most lizard-brained impulses. Millions have been taken in by this dangerous demagogue and so long as he keeps bringing the media its bacon, far be it for them to do their jobs and pose any real challenge.