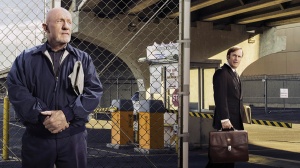 Spinoff shows don’t usually generate the same enthusiasm and critical appreciation as their parent series. In today’s Golden Age of Television, the very term “spinoff” connotes an idea that’s run its course but left a few bucks on the table for a studio to scrape up. Not so with Breaking Bad prequel Better Call Saul, a show that manages to have an identity of its own while living with its epoch-defining parent’s legacy.

Fans of the original will know the title character well from his tenure as Walter White’s flamboyant bus-bench lawyer, Saul Goodman. But the protagonist of Better Call Saul is actually a semi-reformed conman-turned-upstart-attorney named James McGill. Jimmy will eventually quit the charade of living by other people’s rules and become Saul, but already most of the way through season 2 and we’ve gleaned only a few glimpses of the true Saul. In flashbacks Jimmy uses the name for cons and in flash-forwards his association with Walter White forces him to give up his shady alter-ego for good.

Knowing where the story will end up somehow makes watching happen all the more suspenseful. It’s a device that was used within Breaking Bad itself. Many episodes began with flash-forwards that weren’t explained until the end of the season. Series creator Vince Gilligan has said these flash-forwards were sometimes conceived first and the writers had to fill in the blanks as the season went along. This approach has brought out some of the best storytelling on TV.

Gilligan is such a master of characterization that Jimmy is becoming Saul almost without viewers noticing. When it’s obvious, it’s a gas – such as in the most recent episode, Inflatable, which saw Jimmy get inspired by a waving tube man to purchase a wardrobe of tacky suits which will become a Saul trademark. But it’s turning out Jimmy was never all that distinct from Saul. He’s always been a more-or-less decent egg whose moral compass goes haywire when he hears the sound of a briefcase opening.

This is bad news for season two’s breakout star, Kim Wexler, a fellow lawyer who is Jimmy’s best friend and romantic partner. Kim wants nothing to do with Jimmy’s flexible approach to the law, even if she does get off on running the occasional con with him. She knows how to keep Jimmy in his place for the most part, but they’re getting closer with every episode. Despite Jimmy’s loyalty and love for her their friendship will almost certainly end up suffering for his misdeeds.

Then again, Kim is resourceful and capable in her own right, being the main reason one reviewer called Better Call Saul “one of the most feminist shows on television.” She may end up providing the perfect foil for Jimmy. All that’s known of his personal life from Breaking Bad is that he has an ex-wife. Perhaps this is Kim. It does seem like she’ll do alright for herself, but knowing Jimmy’s future pours on the suspense about Kim’s.

As of the second season’s seventh episode, the cartel is just coming to realize what a bad ass Mike is, and Mike is starting to realize he’s in over his head.

We may not have any idea what’s going to ultimately happen to Kim, but anyone who’s seen Breaking Bad knows what’s going to happen to Mike Ehrmantraut. If you haven’t seen Breaking Bad, though, you may wonder what Mike’s doing on Better Call Saul in the first place. He and Jimmy cross paths numerous times but their intersections are few; generally their stories run parallel. But fans who couldn’t get enough of the tough guy world of Breaking Bad will find a lot more to sink into with Mike’s storyline than Jimmy’s.

Mike’s role has significantly expanded in season two. His story is bringing the Salamancas – including a pre-wheelchair Hector, Tuco, and the stone-faced twin cousins – into the mix. Unlike Tuco’s appearance in the first season, these appearances are far more than cameos. Mike is in deep with the Salamancas. It seems likely that Mike’s dealing with them will bring him into contact with a meth kingpin/restauranteur named Gus Fring, who has his own beef with the cartel.

In addition to reprising fan-favorite characters, Better Call Saul is filled with subtle callbacks to its acclaimed parent series. One episode revisits the Bluetooth-wearing stockbroker whose car Walter White blew up; this time around the guy is conned by Jimmy into paying for a bottle of expensive tequila – the same brand of tequila Gus used to poison his enemies. When Mike meets with Hector in the restaurant, a bell can be heard ringing.

Understanding these references and Easter eggs is by no means essential to enjoying Better Call Saul. It very much stands on its own, and precisely because of the non-story elements it borrows from Breaking Bad. Here you’ll find the same focus on characterization; the same gorgeous cinematography; the same deliberate storytelling; and an extremely similar esthetic overall. It’s got Gilligan’s stamp for sure. The way his team writes dialogue and frames a scene is as identifiable as a Santana guitar solo or a Van Gogh brushstroke.

While most TV is frenetically made for people with ADD, Better Call Saul spends minutes at a time on a character waiting for a phone to ring or patching up a bullet wound. It gives the actors the spotlight and the audience a chance to step into their shoes. Watching Bob Odenkirk’s eyes tells you everything about what Jimmy’s thinking. The same is true for Rhea Seehorn’s Kim and Jonathan Banks’s Mike.

Unfortunately, this is also tied into one of the show’s main problems. Often, it just seems to move too slowly. Episodes are typically between 40 and 45 minutes long, and in that much time the protagonists of Better Call Saul sometimes don’t seem to move anywhere. Spending five minutes on Saul trapped in a nearly empty dumpster room is great TV in its way, but it doesn’t do much to advance the story. Strangely, this never makes the show drag; it only makes episodes feel that much shorter.

While any other series would probably have its story advanced further than Jimmy’s is by now, those other series don’t have the capable acting of this show. Those agonizingly long scenes give the characters relatable motivations. This is a character-driven show; discussions of an episode might have less to do with story and more to do with a great montage or an emotional moment, like Kim referring to her new employer by her old one’s name.

Better Call Saul will forever be tied to its parent series and there’s absolutely no shame in that. The series may turn Bob Odenkirk into the next Bryan Cranston while Vince Gilligan is coming to occupy a position in American storytelling alongside greats like Steven Spielberg. Three episodes are left in the second season, airing Monday nights on AMC. If the team can keep up this level of quality, by the time it’s done Better Call Saul will be that rare spinoff that manages to stand shoulder-to-shoulder with its titanic parent.