You may have seen this gender-neutral bathroom sign somewhere and felt an overwhelming sense of inclusion.

With the nation having pretty much wrapped up its discussion of gay marriage, conservatives are scrambling to find another wedge issue for future elections. North Carolina’s controversial House Bill 2 highlights just how desperate they are to find such an issue.

HB2, otherwise known as the “bathroom bill,” requires individuals in public places to use the restroom that matches the sex they were assigned at birth. It is widely seen as deliberately targeting transgender Americans. Because of this, the bill has attracted scathing criticism, including high-profile boycotts of the state by entertainers like Bruce Springsteen and Ringo Starr.

In response to the nationwide outcry, North Carolina Governor Pat McCrory issued an executive order altering the bill to say that private businesses could allow people to use whatever bathroom they wanted but maintaining the requirement in schools and government buildings. McCrory said he knows his clarifications won’t satisfy everyone but argued, “The vast majority of our citizens want common sense solutions to complex issues.”

He’s wrong on both counts. Not only is this not a complex issue, but it isn’t clear at all how HB2 does anything other than create problems. There is no point to such a bathroom bill in North Carolina or in any other state beyond making a big show of going after trans people, already perhaps the most vulnerable and abused category of people in America.

The behavior these bills are intended to prevent – transgender people using the wrong bathroom and attacking someone – doesn’t exist. There are zero recorded instances of it happening. But that doesn’t stop conservative commentators from letting their perverted imaginations run wild. Apparently paranoia is all the evidence needed to pass legislation.

For all the concern about protecting them, children apparently see little to worry about when it comes to transgender people. FOX News ran a segment in 2014 that spectacularly backfired, showing a group of standers-by in New York City a picture of the proposed logo for an all-gender, or transgender, restroom. Expecting the people on the street to be confused or outraged, everyone in their sample, including the kid, instead simply nodded and said essentially, “Sure, whatever.” 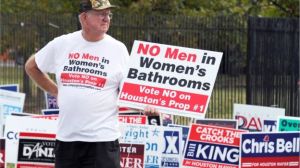 A man protests a bathroom bill that would prohibit discrimination.

If anyone should fear public restrooms it is trans people. According to a study by UCLA’s Williams Institute, 70 percent of trans people reported experiencing discrimination in a public restroom, from verbal abuse to being kicked out. Many had the police called on them. Nine percent were physically assaulted. Of the study’s respondents, one also reported being sexually assaulted.

In fact, transgender people experience some of this country’s most vicious discrimination. They face discrimination in the workplace, discrimination in the housing market, they have one of the highest suicide rates, and they are some of the most impoverished Americans. They are also on the receiving end of extraordinary, wildly disproportionate violence from both police and their fellow citizens. More than one in four are assaulted and that number is even higher for trans people of color.

Legislating against such an already marginalized group is unconscionable, but HB2 speaks to the nastiest right-wing impulses. In the conservative worldview, society and order are under constant attack from subversives like gays, transgender people and immigrants. Thus, laws discriminating against these groups – like the bathroom bill and voter ID – are passed under the auspices of maintaining order.

Hiding out in a bathroom to prey on someone is illegal regardless of HB2 or the label on the door. But that doesn’t stop creeps who want to do it. Rapists and pedophiles exist all over the world. Keeping trans people out of certain bathrooms won’t do a thing to stop them. A trans person poses no greater threat to a child in a bathroom than anyone else. Statistically, they pose less of a threat.

Pretty much the same argument being used against trans people was used to segregate drinking fountains: “These people make me uncomfortable; I don’t trust these people; I don’t want my kids around these people.” Christian parents often panic at having to explain alternative lifestyles to their children. But it’s time to face reality and embrace humanity’s rich diversity. And kids, who haven’t had a lifetime of indoctrination, are the most ready of all to be accepting.

Americans badly need an education about trans people. It’ll be awkward for both groups but it’s something this nation needs to power through. What we’ll likely learn is that trans people are just like any other group. There are good ones, bad ones, perverted ones, intelligent ones, and every other possibility. And like most people, whichever restroom they go into, they’re in there for one reason only – a reason which, frankly, should be of no interest to lawmakers.

One thought on “How bathroom bills create a purposeless wedge issue”