The likely 2016 Democratic and Republican presidential nominees, Hillary Clinton and Donald Trump, are the most disliked major party candidates in American history. But of all the faults these candidates have, their darkest aspects are most visible in foreign policy. And for as much as Americans don’t like the two of them, imagine what the rest of the world must think as the most powerful nation on earth prepares to hold an election between an accomplished war criminal and a maniac who pledges to become one. 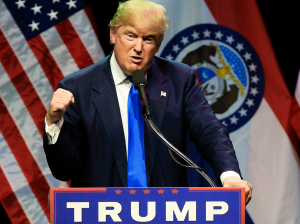 Trump pivots back and forth between megalomaniacal super villain and peaceful non-interventionist.

Trump’s messaging is sufficiently vague and contradictory that he’s taken virtually every position on every issue, allowing many Americans to simply project their own policy wishes onto him. Even some liberals have deluded themselves into thinking that once elected he will be magnanimous and non-interventionist. That’s a big gamble to take on a candidate who has made the violent proclamations Trump has.

He likes to position himself to the left of Hillary Clinton by claiming to have opposed the 2003 invasion of Iraq. But to the limited extent that’s true, his strongest objection had little to do with the war’s obscene cost or its immeasurable human toll – it was that America didn’t steal Iraq’s oil. As president, Trump would “bomb the shit” out of Mideast oil pipelines, send Exxon in to rebuild them, and protect the crews with American troops. This isn’t the position of a non-interventionist.

One proposal that’s gotten a lot of attention is his suggestion to kill the families of terrorists. This proposal – the intentional targeting of civilians to achieve military or political goals – is itself the most basic definition of terrorism. But Trump has no qualms about sinking to the terrorists’ level; in fact, he cites the Geneva Conventions as one of the biggest obstacles to American military supremacy. With almost a hint of envy he suggests that because ISIS beheads prisoners, the US should have no restrictions on its own exercise of violence. Trump’s urge to nosedive into rank barbarism informs another of his most famous foreign policy proposals: torture our enemies, using even more brutal methods than waterboarding, and do it even if it doesn’t work.

At home, Trump’s plan to combat terrorism chiefly involves banning all Muslims from entering the US. In March he supported Ted Cruz’s proposal to deploy a specialized police and surveillance presence in American Muslim communities. Such naked bigotry legitimizes the propaganda terror organizations need to convince new recruits that the West is waging a global religious war against Islam. Trump seems eager to give them that war.

All of this is small potatoes compared to Trump’s views on nuclear weapons. He doesn’t understand why the US even has nukes if it isn’t willing to use them. To that end Trump said he won’t take nukes off the table as an option for dealing with ISIS and, bafflingly, wouldn’t rule out using nukes in Europe, either. He thinks more of the world’s nations should have nuclear weapons, including Japan. The only thing Trump has said on the issue that’s correct is, “The biggest problem we have is… having some madman go out and get a nuclear weapon.” Nothing could put the human species in greater peril than for Trump to be that madman.

When he isn’t jockeying to become the bloodiest despot in history, Trump is criticizing Hillary Clinton for being too hawkish. But because he’s never been in public office all we have to go by are his words. And he’s not wrong about Clinton. She has not only made dangerous pronouncements, she’s held offices in which she acted on them. 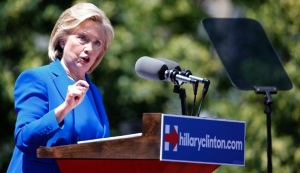 The first major-party female candidate for president is at least as hawkish than any man.

Both Clinton’s 2008 and 2016 presidential campaigns were dogged by her vote on the Iraq War. Then-Senator Clinton not only voted to authorize the use of force in Iraq, she was a prominent propagandist for it. She now says her vote was a mistake, but given the devastation that war caused it’s not the kind of mistake voters should forgive – and her record as Secretary of State suggests she hasn’t learned from it.

As Secretary of State, Clinton architected violence and strife on multiple continents. She championed a 2011 intervention in Libya that reduced the country to a failed state and created a vacuum in which terror groups flourished. Throughout Syria’s civil war she insisted on the ousting of President Bashar Al-Assad, refusing to work on a diplomatic solution that didn’t include his removal. Despite repeatedly being front-and-center as regime change fails, Clinton wants more intervention in Syria. She also wants to send more arms to anti-Assad rebels, even though we now know many of them have ties to terror groups like ISIS.

And it isn’t just terrorists she wants to arm. Secretary Clinton brokered numerous deals between nations and weapons manufacturers. Saudi Arabia cleared a $29 billion deal for Boeing fighter jets with Clinton’s state department – suspiciously, shortly after both parties gave generous donations to the Clinton Foundation. A Mother Jones investigation revealed that Clinton’s state department “approved $165 billion in commercial arms sales to 20 nations that had donated to the foundation, plus another $151 billion worth of Pentagon-brokered arms deals to 16 of those countries.”

Nearly all the world’s refugee crises can be, at some level or another, traced back to decisions Hillary Clinton had a hand in. More than four million Iraqis have been forced from their homes as a result of war in their homeland. Some 9 million Syrians have fled since the start of their civil war. And tens of thousands of Honduran women and children, as well as refugees from El Salvador and Guatemala, now seek asylum in the US.

Because the US president shapes world narrative, what he or she says is nearly as important as what he or she does. In this sense, Trump is certainly worse than Clinton and is probably the worst in modern history. When he talks about dropping a nuclear weapon or murdering civilians, whether he follows through or not he’s signaling to the rest of the world that America is becoming an ever-more unhinged rogue state. This not only makes Americans less safe, it has a destabilizing effect worldwide.

Granted, Clinton’s rhetoric is only a little softer. After plunging Libya into chaos she famously reacted to Muammar Gaddafi’s execution by saying, “We came, we saw, he died.”  She uses needlessly hostile language with Russia and China, threatening them in 2012 that they would “pay a price” for supporting Assad. Much like Trump, she refuses in many situations to take the nuclear option off the table, including with regard to Iran.

But Clinton has one more big advantage over Trump. If nothing else, she can be relied on to know the names of the countries and leaders she’s dealing with and understand their geopolitical positioning. Throughout his entire campaign, Trump has demonstrated zero advanced knowledge of any issue, least of all foreign affairs. Just listen to him attempting to answer questions on subjects like the nuclear triad or Middle East terror groups. He’d have to bribe his way to a C in high school history.

The damage Clinton has done with the power of the military at her disposal is unforgivable, but she’s only a little to the right of most conventional politicians. Trump threatens to set a new standard entirely – far too dumb, narcissistic, vindictive and depraved to check himself from using our military apparatus to its fullest apocalyptic potential. Clinton is a safer bet, but against Trump that’s nothing to be especially proud of.

Since World War II each successive president has, in some way or another, been more extreme, more violent, than his predecessor. Neither Trump nor Clinton give any indication they will break this trend. People around the globe can only watch in horror as Americans – who are, it must be noted, free to make a different choice – poise themselves to make one of these two havoc-wreaking egomaniacs the most powerful person in the world.