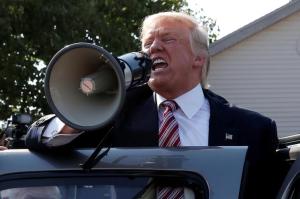 The last thing the world needs: Trump with a bullhorn. REUTERS/Mike Segar

If you haven’t been offended by Donald Trump yet, chances are you just haven’t listened to him enough. He’s insinuated that Mexican immigrants are criminals and rapists, that American Muslims protect terrorists in their neighborhoods, and that a female journalist who challenged him over sexist remarks was on her period. Even groups he hasn’t explicitly attacked are subject to profoundly thoughtless remarks – in response to the murder of Nykea Aldridge, a black mother in Chicago, Trump tweeted, “African-Americans will VOTE TRUMP!”

For his supporters, this is just the kind of no-nonsense tough talk the country needs. Flying in the face of political correctness is regularly cited as one of the Trump’s greatest qualities, as though giving offense was a virtue in and of itself. But the reality is that Trump, and his legions of supporters, are among the most strident PC thugs in the country.

The latest outrage in the world of right-wing political correctness is NFL quarterback Colin Kaepernick’s decision to sit out the National Anthem at recent preseason games. Kaepernick said he refused “to stand up to show pride in a flag for a country that oppresses black people and people of color.”

Reactions from the right-wing PC police were swift. Tomi Lahren of The Blaze told Kaepernick, “I support your right to freedom of speech and expression,” but “if this country disgusts you so much, leave.” Trump was even less nuanced, saying, “I think it’s a terrible thing… maybe he should find a country that works better for him.” Former Congressman Allen West wrote, “[T]he NFL has no issue disrespecting law enforcement officers but only ‘encourages’ players to respect the symbol of our nation.”

All this fretfulness over insufficient patriotism comes from a right wing that thinks America is a wasteland of Mexicans and lesbian farmers that needs to be made great again. Trump and his supporters clearly have no love for the country as-is, so it’s more than a little fishy that they expect Kaepernick to.

There is no more authoritarian form of political correctness than the demand that a flag be saluted. But forcing reverence to authority is one of the chief crusades of right-wing PC police. Trump, who regards himself as the most magnificent being in history and threatens litigation over any dissent on the matter, is their perfect champion.

At the heart of the debate on political correctness is the concept of “triggers.” These are words or images that cause offense or, in some cases, actual trauma. Conservatives are triggered when they feel someone isn’t properly respectful. If that disrespectful person is nonwhite it’s especially scandalous. As a poignant tweet pointed out, Kaepernick protested exactly as politicians and pundits so often encourage black men to do: peacefully. Perhaps it isn’t the methods of black protesters that anger conservatives so much as it is that they’re protesting at all.

Race, as it is for PC warriors on the left, is a big source of triggers for PC warriors on the right. On the left, the most offensive word in the English language might be the ‘n’-word. The left is generally opposed to racial epithets, stereotypical depictions in media, and other cultural insensitivities. For the right, the most offensive word might be the ‘r’-word – the word “racist” itself. They feel it’s used as a bullying tactic by the PC left. 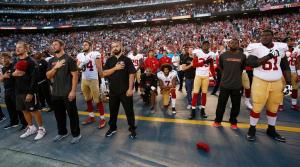 Maine Governor Paul LePage decried critics who called him a racist by saying it’s “like calling a black man the ‘n’-word or a woman the ‘c’-word.” Days earlier LePage, a Republican, had said, “When you go to war… You shoot at the enemy. You try to identify the enemy. And the enemy right now, the overwhelming majority of people coming in are people of color or people of Hispanic origin.” LePage may hate being called a racist but he probably understands the phrase, “Call a spade a spade.”

Same goes for Trump. He built his political career on the racist birther conspiracy, which holds that the first black president must have been born in another country. This crackpot theory dominated media coverage in 2011, deeply divided the nation and wasted President Obama’s time. When asked whether Trump should apologize for it, surrogate Rudy Giuliani insisted any apologies should come from the left for disparaging Trump as a racist.

Racism is undoubtedly alive and well among many Trump supporters. Yet any conviction of racism can end a person’s career and marginalize him or her to the outskirts of society. This is a positive consequence of political correctness that Trump is trying to undo. Racism is so unpopular that the charge must be denied. When it can’t be denied, racists instead try to make the very label that describes them politically incorrect.

Trump is happy to fight the PC battles of Christian conservatives, too. One of the things Trump says will be great about the country under his leadership is that, “We are going to start saying ‘Merry Christmas’ again.” “Happy holidays” is a quintessentially American greeting, gaining popularity in a World War II-era Bing Crosby song. It has never had any malicious intent, but it threatens to acknowledge the existence of other religions and is therefore an intolerable insult to modern conservatives.

A list of things that make politically correct conservatives huffy could fill a book. Beyoncé throws them into a conniption regularly; Bill O’Reilly frequently singles her out and she generated special commotion for fusing politics into her Super Bowl and VMA performances. Everything from atheist billboards to a flight attendant’s Black Lives Matter button to the outing of Dumbledore has caused conservative PC outrage. Even Trump, who casually uses profanity, got the vapors over former Mexican President Vicente Fox’s use of the ‘f’-word.

Whatever lines the left crosses to impose political correctness, their often sincere desire to account for the experiences and sensitivities of others comes from a good place. Despite waving the banner of individual liberty, conservatives draw much narrower lines into which they demand people file, and for far more selfish reasons. Trump is a man who has never recognized such a contradiction in himself, let alone been bothered by one. That he has billed himself as an anti-PC crusader is a testament to the credulousness of his supporters. It makes a disturbing kind of sense that he’d command a movement offended by “Happy holidays” while telling minorities to “get over” racism. He’s the manifestation of white privilege, but don’t dare mention it to a conservative – the phrase is another of their biggest triggers.