Democrats have a lot to learn from Bernie Sanders 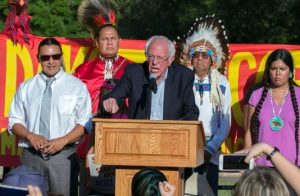 Bernie Sanders appears with Native American leaders to express his opposition to the Dakota Access Pipeline.

Hillary Clinton’s stock is falling. Even her prominent surrogates and media advocates are conceding that Donald Trump has a serious chance of becoming the next president. The two historically unpopular candidates are neck-and-neck in national polls and Clinton has fallen behind in crucial swing states like Florida and Ohio. Meanwhile her primary challenger, Bernie Sanders, is surging, boasting an 87 percent approval rating among his electorate and enjoying a nationwide favorability of +18 to Clinton’s -14.

Any Democrat worried about the outcome of the 2016 election should be analyzing that discrepancy. All during the primary, the news media and Clinton’s surrogates pushed the narrative that she was the strongest general election candidate. Now is the time for establishment Democrats to take their cues from Sanders and his supporters. If she maintains her current course, Clinton probably cannot win this election. END_OF_DOCUMENT_TOKEN_TO_BE_REPLACED