Conciliation is not the right response to Donald Trump 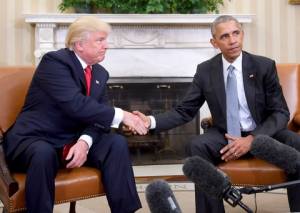 President Obama shaking the hand of a huckster who entered politics by promoting a racist conspiracy about his birthplace.

The 2016 presidential campaign was the most bitter in recent history. Donald Trump was so loathsome that Hillary Clinton’s attack ads consisted of little more than the bigotry and sexism that came out of his own mouth. Clinton was so corrupt that Trump threatened to jail her. And after it was over, everyone decided to play nice. The loser called the victor, the winner thanked his opponent, the current president wished Trump luck, and talking heads encouraged us all to give the president-elect a chance.

Tens of thousands of Americans weren’t having it. Protests erupted the day after Election Day in Chicago, Philadelphia, Los Angeles, Portland, Austin and elsewhere. In New York, some 100,000 people demonstrated their opposition to the incoming president. In Austin, protesters chanted “Immigrants are welcome here.” Graffiti saying “Fuck Trump” and “Black Queer Trans Lives Matter” was found in Chicago. For such marginalized individuals, there is a palpable sense of worry about their rights and status.

Pro-Trump graffiti also popped up. In a Minnesota high school bathroom vandals scribbled “#Whitesonly,” “Whiteamerica” and “Go back to Africa.” Swastikas, including one replacing the ‘T’ in Trump, were drawn on a Philadelphia store window. At Texas State University a flyer declares, “Now that our man Trump is elected… time to organize tar and feather vigilante squads and go arrest and torture those deviant university leaders spouting off all this diversity garbage.” Reports of race and sex-motivated bullying are ubiquitous.

This conscious unleashing of white supremacy is why Trump, despite the lofty words of conciliatory liberals, doesn’t deserve a chance. He doesn’t deserve it, but despite losing the popular vote, the Electoral College gave it to him. To some extent the wishes of tens of millions of Americans who did vote for him need to be respected. If the wishes of those Americans is to frighten, intimidate and oppress other human beings, however, those wishes must not be respected.

This flyer was found at Texas State University in liberal San Marcos, Texas.

Bernie Sanders issued the right response to Trump’s win: “Donald Trump tapped into the anger of a declining middle class that is sick and tired of establishment economics, establishment politics and the establishment media… To the degree that Mr. Trump is serious about pursuing policies that improve the lives of working families in this country, I and other progressives are prepared to work with him. To the degree that he pursues racist, sexist, xenophobic and anti-environment policies, we will vigorously oppose him.”

The vast majority of establishment Democrats opposed Sanders’s presidential candidacy from the beginning. Now those same weak-willed, out-of-touch Democrats are the only people formally equipped to prevent Donald Trump and the Republicans from wreaking havoc on the environment, the economy, labor rights, healthcare, and all the social progress that’s been made over the last 50 years.

This is exactly why conciliation is not the right answer to Donald Trump’s presidency. Without massive public pressure, most Democrats lack the backbone to return the obstructionism and brutal politicking that defined congressional Republicans for all eight years of President Obama. Perhaps Trump can be stopped from giving away every square inch of public land to oil exploration – but it won’t be Republicans who stop him and it won’t be Democrats, either, unless their constituents make their demands loud and clear.

Already Trump has given Americans plenty to protest. His 100-day plan was released shortly after the election and it attacks environmental protections with unprecedented ferocity. Trump promises to lift restrictions on fossil fuels – already being dug out of the ground and burned up at calamitous rates – and withdraw the US from international cooperation programs on climate change. He is likely to appoint Myron Ebell, the director of an Exxon-funded climate denying think tank, as head of the EPA.

The hatred and bigotry that fueled much of Trump’s campaign has emboldened racists and inspired a surge of hate crimes. White conservatives ridicule protesters, but white conservatives didn’t wake up on November 9 to find themselves targets. Despite Obama never saying he would, conservatives spent eight years in paranoid terror that he’d take their guns. Trump has actually told Muslims and immigrants to expect surveillance and deportation, and his supporters are already taking intimidation into their own hands. There is good reason to protest.

Donald Trump’s candidacy was not normal, nor will be his presidency. It should not be normalized. The most powerful position on earth can’t be entrusted to a man who is a serial sexual predator, a tax dodger, an unashamed bigot, and a fraudster. Assault on the planet and people of color does not deserve a chance, and the majority of Americans who voted against Trump are not obligated to give it one. Quite the opposite, in fact.