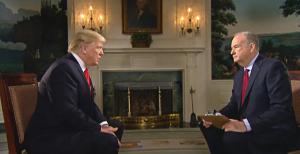 A statement President Donald Trump made to Bill O’Reilly during a pre-Superbowl interview landed Trump in more trouble than usual. In defending Russian dictator Vladimir Putin from O’Reilly’s allegation that he’s a killer, Trump said, “You think our country’s so innocent? Take a look at what we’ve done too. We’ve made a lot of mistakes. I’ve been against the War in Iraq from the beginning… a lot of people were killed, so, a lot of killers around, believe me.”

Establishment politicians and media fretted over Trump’s frank assessment of American foreign policy, but for once he’s not wrong. In fact, Trump went much further than most politicians usually do in his remarks, venturing into territory usually reserved for the likes of Noam Chomsky. His equation of the Iraq War with Putin’s murders suggests the Iraq War was not merely an honest mistake made with good intentions, but a crime.

And it was. The 2003 invasion of Iraq was not only an unforgivable crime against humanity, it could very well have set this entire century up for failure. But it is an interesting statement to hear from Trump, who has advocated proudly for the use of torture, the intentional killing of enemy civilians, the piracy of Iraq’s oil, and the potential use of nuclear weapons against ISIS.

Of course, Trump didn’t go into detail, nor could he if he wanted to. Occasionally his impulse and emotion-driven brain lands him close to the truth. When it does, liberals should not feign outrage. The part of Trump’s statement that should really concern Americans is not his condemnation of US foreign policy, but his seeming indifference to Putin’s murders and political assassinations.

His initial reaction to O’Reilly’s question is a shrug. Trump is a vindictive egomaniac who thinks Putin’s execution of reporters isn’t such a big deal. The man possesses no sense of right and wrong beyond how something affects him directly. Given that Trump’s moral void is filled by an apocalyptic zealot like Steve Bannon, it may not be long before Putin-like atrocities start to happen here.

Trump is right to call the Iraq War a crime, but wrong to consider his Yemen operation a “success.”

After a judge in Seattle ordered the Department of Homeland Security not to enforce Trump’s Muslim travel ban, Trump tweeted, “If something happens blame him and court system.” He is guiding Americans to direct their anger at the few remaining institutions of democracy that function independently of his tyranny. If an attack does happen, and Trump can convince enough of the public that these institutions are a threat to national security, there’s truly no telling how much he will be able to get away with.

Attacks on the press seem even especially likely. Trump regularly calls out critical journalists by name and disparages the press as the “dishonest media” – a barely concealed paraphrase of the Nazi expression Lügenpresse, or “lying press.” He singled the press out as “scum” at rallies and has not issued a word of condemnation to supporters of his who bombarded journalists with threats, slurs, harassment or worse. The potential for violence is enormous.

If Trump ever did want to carry out Putin-like atrocities, much of the groundwork has already been laid for him by President Obama, who famously kept a kill list of people targeted for assassination. Targets, including American citizens, receive no due process and no trial. Those powers in the climate of far-right paranoia manufactured by Trump and Bannon are terrifying to consider. Americans may well experience drone strikes on our own soil, against our own citizens, by our own government.

Now the Kremlin is seeking an apology from FOX News and O’Reilly over the question. That they’d even ask is a brazen move enabled in large part by Trump’s opening the door to authoritarianism and his professed admiration for Putin’s “strong” leadership. Putin and Trump agree on quite a bit, but a big area is their shared belief that everything said about them should be positive.

There is a lot to be gleaned from Trump’s statement on Putin. For liberals, it’s important not to attack Trump in the few instances when he accidentally lets the truth slip out. On the other hand, Trump’s view of the Iraq War has nothing to do with his personal morality, because he has none. Already Trump has joined the ranks of his “lot of killers” with his botched raid in Yemen.