No, Donald, the ‘real story’ isn’t why there are leaks, it’s what they reveal 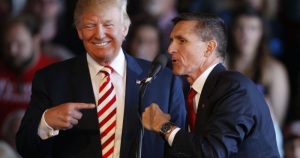 During Trump rallies, Flynn, right, would lead the crowd in “Lock her up” chants. After 24 days in office Flynn has resigned over a likely violation of the Logan Act.

The biggest scandal this week in the Trump Administration is the resignation of National Security Advisor Michael Flynn, a retired lieutenant general and hard-right conspiracy theorist who had no business in the position in the first place. Flynn was forced to resign when it became known that he communicated with his Russian counterpart prior to Trump’s inauguration and lied about what was discussed. After Flynn’s resignation Trump tweeted, “The real story here is why are there so many illegal leaks coming out of Washington?”

It isn’t just Flynn. Leaks from the Trump White House have painted a grim picture of disarray, of a petulant and ignorant man-child president who may not even be able to read well, who tunes out of policy discussions, doesn’t bother to check Steve Bannon’s executive orders before signing them, and spends less time doing the job than he does monitoring depictions of his staff on Saturday Night Live.

These reports come from anonymous sources in the White House, which are vetted by journalists. But the Flynn leaks came from inside the national security apparatus itself. Phone calls Flynn placed with his Russian counterpart in December were recorded. In direct contradiction to public statements, Flynn discussed the Obama-opposed sanctions, perhaps promising that Trump would lift them once in office. The Justice Department made Trump aware that Flynn might be compromised by Moscow in late January.

Flynn’s resignation has been met with widespread approval. But the source of the Flynn leaks has some commentators concerned. Writing in The Week, Damon Linker describes the incident as “evidence of the precipitous and ongoing collapse of America’s democratic institutions — not a sign of their resiliency… no matter what Flynn did, it is simply not the role of the deep state to target a man working in one of the political branches of the government by dishing to reporters.”

The “deep state” refers to parts of the government that aren’t directly responsible to public pressure and that operate through transitions of power. It includes military and intelligence services. While the thought of these actors sabotaging good-faith public officials is troubling, there is a big difference between digging up pointless gossip and making the public aware of potential national security risks like Flynn.

Linker describes exactly the situation we have now – one in which a Republican Congress won’t launch investigations that could compromise fellow Republicans. He still concludes, “In a liberal democracy, how things happen is often as important as what happens. Procedures matter. So do rules and public accountability. The chaotic, dysfunctional Trump White House is placing the entire system under enormous strain. That’s bad. But the answer isn’t to counter it with equally irregular acts of sabotage.”

What Linker says sounds nice, but it’s impractical at this moment. Imagine a game of Monopoly in which one of the players acts out of turn, pilfers money from the bank, plants hotels without paying for them, and steals other players’ property cards. Players who continue to respect the rules can be proud of their code, but the result will be that the rule-breaking player ends up with all the money and all the deeds.

In reality, our rule-breaking player is a semi-legitimate president who wants to consolidate every federal power under his executive branch. That Flynn might be compromised was known to Trump weeks ago, but no action was taken until the Washington Post published its story. Had the sources not leaked, Flynn would still be serving in one of the nation’s top security posts, potentially endangering every American. Leaks that are substantive, and of concern to the American people, should be brought to light no matter the method.

Trump, of all people, has no standing to protest the source of the leaks. During the presidential campaign he openly encouraged Russia to hack Hillary Clinton and the DNC. He and other right-wing commentators became big fans of Wikileaks for publishing stolen information. Now that they’re in power, they’ve reversed their positions on leaks once more.

The American people need to understand whatever is going on between Trump and Russia. All the secrecy on one hand, and Trump’s effusive praise for Putin on the other, suggests the arrangement goes beyond a good-faith desire to normalize relations. If Trump’s explicit aim is to help Putin’s oil business, or if he’s just another pawn in Putin’s new world order of ultra-right, anti-Islamic nationalists, we should welcome any and all leaks that help piece that picture together.