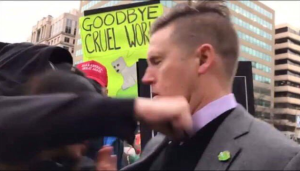 The incident recalls President Trump’s inauguration when Richard Spencer, the white nationalist who coined the term “alt-right,” was punched in the face by a protester. Later that month, riots shut down a speaking engagement by disgraced Breitbart editor Milo Yiannopoulos at Berkeley. Mainstream commentators argue these incidents stifle free speech. But what’s so often left unsaid is that Savage, Spencer, Yiannopoulos and others are figureheads of American fascism, the most violent movement in the country today.

In the run-up to the election, Savage encouraged Trump to “rule by decree” and violate the civil rights of liberals. He boasted of Trump, “Finally a white man stood up with you-know-what and said, ‘Go to hell’ to his enemies.” Spencer calls for a “peaceful ethnic cleansing” of non-Europeans from America and held a fascist post-election celebration in which he led a chorus of Nazi salutes to Trump. Yiannopoulos has used his platform to single out transgender citizens and promote persecution of undocumented immigrants.

These once-fringe figures now exist on the periphery of the White House itself. President Trump’s senior adviser, former Breitbart CEO Steve Bannon, once declared his site a platform for Spencer’s alt-right. Yiannopoulos co-authored a glowing introduction to the alt-right for Breitbart in which the movement, which consists primarily of racist internet trolls, is praised as “dangerously bright” and filled with “youthful energy and jarring, taboo-defying rhetoric.” Trump appeared on Savage’s show the morning of Election Day.

Policy is being shaped in this cesspool of racist nationalism. Trump has attempted two travel bans that target Muslims from the Middle East. Immigration officers have been given greater leeway to deport nonviolent offenders and tear apart families. Attorney General Jeff Sessions wants to escalate the War on Drugs, an immoral campaign that does nothing to curb drug use but does lock up lots of low-income minorities and ruin their communities. 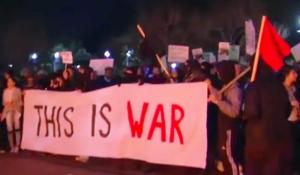 When we talk of political violence, we rarely recognize this type of state-sanctioned violence. Detained immigrants are caged in for-profit prisons and made to eat spoiled food and live among filth. Hundreds of citizens are killed each year by police, many of them unarmed and nonviolent. Trump’s barbaric budget slashes life-saving environmental protections, denies healthcare to millions, and takes food from the poor – all in the name of a colossal military buildup and tax breaks for the rich.

Meanwhile, liberals fret over broken windows and punching Nazis. But for every limousine burned by an antifascist, there are multiple black and brown people with broken homes or bullets in their body. To respond passively to all of it – the normalization of fascism, the state-sanctioned violence in their communities, the racism in the White House, the spread of white nationalist propaganda – is a luxury many endangered Americans feel they can no longer afford.

And no one has normalized street violence in politics more than Trump. His rallies during the campaign became notorious for heated encounters in which Trump encouraged attendees to “knock the hell out of” protesters, reminisced fondly of days when protesters would be “carried out on a stretcher,” and promised to pay any legal fees incurred by supporters who attacked protesters. Post-election Trump rallies continue the trend, escalating to the point where one supporter called for “liberal genocide.”

These people cannot be out-debated. As the work of political scientist Hannah Arendt illustrates, fascist propaganda is “not a statement of fact, but a declaration of intent.” White supremacists and the far-right will tell a person that they’ve no right to healthcare or education, that their ethnicity should be banned, and that their children are a threat to the white race. They will tell a person they have no right to exist and then feign outrage when the response is impolite.

Racism is not a valid intellectual position, as Spencer would argue. Nor is it campy rebellion, as Yiannopoulos treats it. And free speech need not protect calls for genocide, a crime under international law. Dehumanization is itself an act of violence. Savage regularly refers to undocumented immigrants, Muslims, and people he disagrees with as “vermin” or “scum.” Even the ubiquitous slur “lib” recalls the dehumanizing propaganda of fascist regimes. It’s little wonder that a steady consumer of this media would call for genocide.

Such invective must also bear some responsibility for the rise in white supremacist violence. White terrorists, incubated on far-right message boards and indoctrinated in hate by right-wing media, are by many counts the most prolific terrorist actors in the US. Hate crimes since the election have included a mass shooting in a Toronto mosque, the desecration of Jewish cemeteries, increased violence against transgendered people, and proliferation of neo-Nazi propaganda on campuses. President Trump, meanwhile, directed law enforcement to focus its attention elsewhere.

Little of this is new under Trump. When fascism emerged in Germany, the fledgling Nazi Party frequently clashed with working-class antifascists. State-sanctioned violence has plagued America from the beginning. So, too, has xenophobia – early waves of Italian and Irish immigrants were not even regarded as “white.” What is new is the acceleration of these evils under Trump. The threat for vulnerable people is more immediate than ever.

No one wants violence in politics and no citizen should feel unsafe due to their political views. But fascism is not thwarted by gentlemanly discussion. Because they are impervious to facts, words will never hurt a fascist. Sticks and stones, though, might break their bones. And if that’s how the intended victims of American fascism see fit to defend themselves, those who aren’t immediately at risk should try to understand where it’s coming from.