In his defense of Donald Trump, Rudy Giuliani declares, “To call anyone a racist is outrageous.”

Comedian Louis CK has a bit about white privilege that includes a riff on the lack of effective racial slurs against white people. “Ruined my day,” he mockingly complains after being called a cracker. It’s an interesting observation, but CK overlooked one word that does cause white people to become uppity: the word “racist” itself. For many white people, it has become a slur in its own right.

During the 2016 presidential campaign, accusations of racism were made against Donald Trump and many of his top surrogates, including Rudy Giuliani, Steve Bannon and Jeff Sessions. The allegations were well-founded: Giuliani supports stop-and-frisk policing and has been an aggressive critic of Black Lives Matter; Bannon’s fascist-lite Breitbart served as a propaganda arm for Trump and a platform for the white nationalist alt-right; and Sessions was deemed too racist for a federal judgeship even in the 1980s.

Trump’s racism has been well-documented for decades. He first attained national publicity with a housing discrimination case in 1973. In 1989 he bought ad space in New York newspapers to attack a group of black and Hispanic teenagers falsely convicted of rape, and maintains their guilt even after DNA evidence cleared them. His political career began in earnest when he peddled the racist birther conspiracy and he launched his presidential campaign by demonizing Mexican immigrants as drug dealers, criminals and rapists.

Allegations of racism cause white people great offense. Racist has become their ‘r’-word. It triggers immediate defensiveness and hostility. Even neo-Nazi Richard Spencer, who coined “alt-right” as a code term for white nationalism and calls for a “white ethno-state” and “peaceful ethnic cleansing,” denies he’s a racist. “It’s a pejorative word,” Spencer said. “It is the equivalent of saying, ‘I don’t like you.’ ‘Racist’ is just a slur word.” 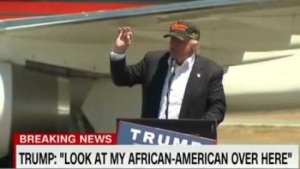 Proud that a black man attended one of his rallies, Trump proclaimed the man “My African-American.”

Being called a racist reminds white people of slavery, lynch mobs, and wars of imperialism. They reject these as crimes from the past that they had nothing to do with. What they don’t realize is that slavery still exists; it’s just moved to the penal system. Lynch mobs now wear badges and the wars of imperialism have merely shifted from the Far East to the Middle East. Racist policies continue, but to call them racist is now politically incorrect.

During congressional review of Jeff Sessions’s appointment as attorney general, Elizabeth Warren attempted to read from a 1986 letter written by Coretta Scott King protesting Sessions’s then-nomination for a federal judgeship. In the letter, King accused Sessions, then a US Attorney in Alabama, of using his office to “intimidate and frighten elderly black voters.” Before Warren could read the letter, she was censured by Senate Majority Leader Mitch McConnell, who said Warren “impugned the motives and conduct of our colleague from Alabama.”

Since then, Sessions has been confirmed as attorney general. He has promised an escalation of the War on Drugs, a fundamentally racist policy that has imprisoned generations of people of color and ravaged their communities. The Trump Administration has also signaled its intention to further suppress the vote, particularly in poor and minority districts. But to label these actions and the people carrying them out as racist is, for many whites, a bridge too far.

White people’s desire to not be labeled racist is intense. On one hand, this reflects a growing recognition that racism is evil. But the effect has been white people pretending racism doesn’t exist, exemplified by Trump’s ridiculous declaration, “I am the least racist person that you have ever met.” Gripes about political correctness also stem from whites’ insistence that they not be labeled racist. The irony is that blacklisting the word “racist” is the most sinister form of political correctness yet devised.

There are degrees of racism. Many racist attitudes happen on a subconscious level, reinforced by media and cultural narratives that seem benign, and they occur in the minds of people with no active ill intent. But those attitudes, if not rooted out and honestly confronted, lead to white complacency. They lead white people to, for instance, sympathize with and exonerate a man who murdered a black teenager over his suspicious hoodie.

Above all else, white people need to learn from people of color. The best reaction to an accusation of racism is an effort to understand the charge and consider an attitude adjustment. Defensiveness minimizes the allegation and, therefore, can itself be a racist act. The essence of white privilege is obliviousness to the systemic racial oppression that touches every corner of American life. By treating “racist” as an unfair slur, white people conveniently maintain that system while removing themselves from any complicity in it.