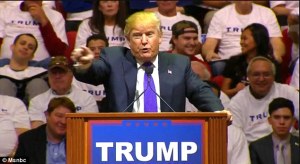 At rallies across America during the 2016 campaign, Donald Trump called for violence from his podium.

At a practice for the Republican congressional baseball team Wednesday morning, a mass shooter opened fire and struck five people. One of them was Steve Scalise, the third-ranked Republican in the House of Representatives. The shooter, identified as 66-year-old James Hodgkinson, was killed in a shootout with Capitol police. In the ensuing news cycle, Hodgkinson’s political persuasion became public knowledge. He was, apparently, a political progressive who volunteered on the Bernie Sanders campaign and despised Donald Trump’s presidency.

Figures on the far right wasted no time blaming Trump’s critics for the attack. Comments on right-wing message boards, and on Hodgkinson’s own Facebook page, excoriated liberals for dividing the country and encouraging violence. Sean Hannity, whose FOX News program is the leading Trump propaganda hour on cable, warned, “When Democrats continue to dehumanize Republicans… the climate around the country becomes more than toxic.” Newt Gingrich blamed “an increasing intensity of hostility on the left.”

Meanwhile, Trump launched his presidential campaign with dehumanizing remarks about Mexican immigrants – and violence against Mexicans quickly followed. He talked about jailing his political opponent and led his rallies in chants of “Lock her up.” He repeatedly called on supporters to assault protesters in his audiences and pined for the days when they’d be “carried out on a stretcher.” He referred to the media as “dishonest scum” and supporters wore shirts reading, “Rope. Tree. Journalist. Some assembly required.”

Trump’s war on the media served as a backdrop last month when GOP Congressional candidate Greg Gianforte body slammed a reporter for asking a question about healthcare. Gianforte, and others on the far right, blamed the reporter for being too aggressive. His crime was seeking information about a healthcare bill that affects millions of American lives. Breitbart, purportedly a journalistic entity, effusively praised the body slam as a crowd-pleasing finishing move. Gianforte won the election and later pled guilty to assault.

Right-wing, anti-government zealotry is likely the most pervasive form of terror in the US. To name just a few examples: In 2015, a man shot 12 people near a Planned Parenthood in Colorado. In 2011, Democratic Representative Gabrielle Giffords and 18 others were shot by right-wing conspiracy theorist Jared Loughner. Late last year a man motivated by a far-right conspiracy fired a gun in a pizza parlor.

This explicit call for violence against Trump’s critics in the media became popular in 2016.

Whether stories like these directly spur the actions of shooters is often hard to know for sure. In most cases – including James Hodgkinson – the likeliest scenario is a combination of factors. Political targets are chosen, but the murderousness is more deeply rooted. Tragedy should provide a good time for reflection, but in the wake of Wednesday’s shooting, the right has not taken that opportunity.

Breitbart published multiple articles citing examples of violence-provoking, left-wing vitriol. Most of the gripes are with tweets or jokes made by celebrities, none of which are any worse than the rhetoric of right-wing talking heads, including Trump whisperer Michael Savage, and elected officials, including Trump himself. In fact, one article cited Robert De Niro saying he’d like to punch Trump in the face – exactly the same thing Trump once said about a protester.

In a video posted Wednesday night, Alex Jones of InfoWars declared, “The first shots of the Second American Civil War have already been fired.” He accused Democrats and the mainstream media, including CNN and The New York Times, of “calling for Trump’s death and calling for Trump supporters to be attacked.” Another video, uploaded the same night, is titled, “Democrats Launch Terror Attack On Trump’s Birthday.”

All of this is meant not as a sincere analysis of the crime, but as an attempt to silence anti-Trump dissent. Commentators like Noam Chomsky and Naomi Klein have warned of the far right’s desire to capitalize on any tragedy. Trump’s propagandists are seizing this as their moment to chill the Russia investigation and any critical coverage of Trump’s corporatist, neo-white nationalist presidency.

Corporate media has done all it can to normalize this president. On CNN, Fareed Zakaria proclaimed Trump “became president” when he bombed Syria; Van Jones said the same thing on the same channel when Trump addressed a joint session of Congress. But try as they might, the media simply cannot fully normalize Trump’s barrage of lies, gaffes and corruption – not without becoming, as Breitbart and InfoWars are, full-service propaganda mills. Anti-Trump reporting is an inevitability given the utter heinousness of his presidency.

Opposition to Trump is widespread. The latest poll shows him with a 60 percent disapproval rating. Some among that 60 percent of Americans may be violent. Now the far right wants comedians and satirists to take the blame for them. But Trump’s administration, and the entire ideology of the alt-right, is fundamentally rooted in violence – against women, people of color, the environment and the poor. If the far right wants to de-escalate tensions, they’re welcome to start from their end.