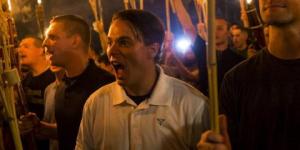 Neo-Nazis, white supremacists, the alt-right – call them what you will, this group of angry, white men had a busy weekend. Hundreds of them descended on Charlottesville, Virginia, for a Unite the Right rally. Demonstrators began a torchlit march on Friday night and by Saturday had turned the city into a warzone, culminating in an act of right-wing terror that caused one death and injured 19 others. In response, President Trump couldn’t bring himself to denounce one side more than any other.

Trump was virtually alone among high-profile public figures in his refusal to call out the alt-right by name. He also neglected to call the use of a vehicle to plow into a street filled with counter-protesters an “act of terror.” An anonymously issued statement from the White House mentioned “white supremacists, KKK, Neo-Nazi, and all extremist groups,” and Trump finally said the words himself on Monday, but that forced statement was followed on Tuesday by more racist and divisive tweeting.

Hate groups didn’t conceal themselves on Saturday. Nazi flags and Hitler salutes were all over the streets of Charlottesville. But Trump has tried to coyly stay on the good side of white supremacists for decades. In February 2016, when asked about the endorsement of former Ku Klux Klan Grand Dragon David Duke, Trump said he knew nothing about white supremacy and would have to do some research.

After the election, mainstream media distanced Trump voters from Trump’s racist ideology. Economic anxiety became the issue that ushered Trump into the White House. But fascists always tie their racism into economic anxiety. Hitler claimed that international, Jewish-controlled banks caused German suffering. Confederates worried that the abolition of slavery would destroy the American economy. Trump doesn’t direct Americans’ anger at Mexicans or Syrian refugees on the basis of racism alone – he blames them for using government resources and stealing jobs. 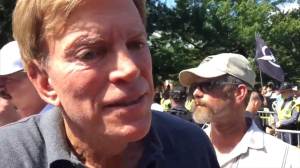 Former KKK Grand Dragon David Duke said his purpose at the Charlottesville rally was to “fulfill the promises of Donald Trump.”

It matters little that such paranoias are not based in reality. The effect of immigration on the economy is complicated, but it is often a net positive. Immigrants accept lower-paying jobs that established residents don’t want, they purchase homes and contribute to the economy, and they pay taxes that fund public services. At the same time, their lack of social and political influence makes them convenient scapegoats.

In the wake of right-wing terror in Charlottesville, many neo-Nazis are having a bad time. Several of them have been outed on social media and lost their jobs. One man was publicly disowned by his father. Web hosting companies have cut off far-right websites, including Andrew Anglin’s Daily Stormer, perhaps the largest and most aggressive neo-Nazi site on the web. Plans to rename or remove Confederate monuments have accelerated.

These may seem like setbacks, but white supremacists are undeterred. They are happy to have any national attention. Acts of terror cause them no shame; they are precisely the point. Much like Adolf Hitler’s primordial Nazi Party did in the 1920s, Trump-supporting neo-Nazis hunger for street violence. The alt-right has a self-described “military arm” specifically designed to get physical with counter-protesters. Charlottesville was a success to them, and they’ve already planned events for as early as this weekend.

White supremacists know this administration will sit on its hands rather than deal with them. Senior White House official Sebastian Gorka said just last week that white supremacy is not a problem. Trump has no ideology beyond himself, so he can ignore a Nazi flag if the flag waver is wearing a “Make America Great Again” hat. David Duke freely invokes Trump’s name without a personal rebuke. Neo-Nazi demonstrators wear Trump’s white polo and khakis golf garb and the president feels only flattery.

The fascist goal is the replacement of US democracy with a totalitarian system that subjugates, removes, or even kills black, brown, Muslim, Jewish, LGBTQ, indigenous, Latino, and other non-white people. This philosophy need not be given a platform and must not be tolerated. Hate uses propaganda, violence and terror – if it can’t instigate a street clash with racial invective or intimidation, it will start one. Honest debate cannot beat it because it doesn’t play by those terms.

History will not allow white supremacists any better moment than this. They enjoy an indifferent, if not supportive, White House, and a robust far-right media that casts blame on “many sides.” Since Trump and the police seemingly won’t, it’s up to ordinary people – anyone with any decency, even if they’d rather not be involved in politics – to rise to the times and face down fascism in defense of humanity itself.