How high taxes and a mixed economy made America great

Much like our own era, the turn of the 19th Century was dominated by wealthy interests and corruption. The progressive political movements that responded to it brought America into its greatest era of general prosperity.

Donald Trump’s campaign slogan, “Make America Great Again,” triggered an important conversation in American politics. On one hand, it was vague enough that Americans could write whatever fantasy they wished onto it. On the other hand, it forced us to ask: when was America great? Depending on your position in the social-economic-racial strata, the answer might be never. But there’s one era for which most Americans share a nostalgic sense of glory: the first few decades after World War II.

We were riding high then. The Greatest Generation had just won the planet’s deadliest and most far-reaching conflict to date. In the following decades of the 1950s and 60s, the American middle class boomed and prosperity was widely shared among the population. People of color made meaningful civil rights gains as the evils of white supremacy began to be more forcefully confronted. And all while the American dream was being realized, the country was the highest-taxed it has ever been.

From 1944 to 1964, the top income tax bracket was more than 90 percent. Today, it’s about 40 percent. The corporate tax rate was more than 50 percent in the 1950s. Today, because of loopholes and deductions, the effective rate corporations pay is 20-25 percent. Republicans want to slash these rates even further, taking the top personal income rate down to 25 percent and the top corporate rate as low as 15 percent. This will remove an estimated $1.9 trillion from the federal budget, most of which will come out of Medicare, Medicaid, and other benefits programs. According to one estimate, 80 percent of the tax cut will go to the wealthiest 1 percent of Americans.

Not only is the Republican tax plan the most radical, upwardly distributive corporate handout in modern US history, it is accompanied by economic trends that show it is patently unnecessary. In 1965, the average CEO made about 20 times more than the average worker; in 2013, CEOs made almost 300 times more. Corporations make more profit now than at any other point in post-War history, even as real wages for workers have fallen. In 1982, the Forbes 400 were worth $93 billion; today, they are worth an estimated $2.4 trillion.

Corporations and wealthy Americans today enjoy both more, and a greater share, of the nation’s prosperity than at any time since the Gilded Age. Ordinary Americans are being crushed by lower wages, longer hours, fewer benefits, and the rising cost of healthcare, education and housing. Yet the Republican prescription is to invest even more in the wealthy. Our own great history shows this is precisely the opposite of what we should do.

Progressive reforms began in earnest in America in the early 1900s. Business practices were abhorrent and political corruption was rampant. The progressives enacted sweeping legislation to protect labor, regulate industry, and limit corruption. After the Great Depression, when the need for oversight of the financial system and protection of consumers became apparent, President Franklin Roosevelt passed the Banking Act of 1933. An unprecedentedly activist government collected more taxes, enforced more regulations, and spent more on the American people. The New Deal and state spending on the run-up to World War II revitalized the nation.

After the war, public investments continued. Between the 1930s and 1960s, Americans constructed thousands of libraries, roads, schools, bridges, buildings, water treatment facilities, and airports, and brought electric power to the countryside, connecting people and businesses as never before. Veterans went to college on the GI bill. Government-funded research produced, or contributed to the production of, technologies like radar, GPS, MRI, computers, microwaves, the internet, and transistors, the building block of virtually all modern electronics. Programs like Medicare, Social Security and welfare offered an increasing number of Americans greater security in old age, ill health, and hard times.

So popular were these reforms that even Republican presidents of the era did little to interfere with them. Moderate Republican Dwight Eisenhower wrote, “Should any political party attempt to abolish social security, unemployment insurance, and eliminate labor laws and farm programs, you would not hear of that party again in our political history.” Richard Nixon would likely be well to the left of even today’s Democrats on many issues – he proposed a national healthcare system, considered enacting a universal basic income, and created the modern GOP’s archenemy, the Environmental Protection Agency. 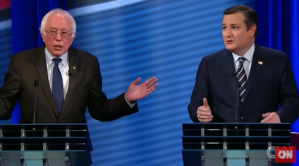 Little of this history came up at a recent debate on the Republican tax plan between Senators Bernie Sanders (I-VT) and Ted Cruz (R-TX). Cruz focused on the familiar right-wing talking points, saying, “Bernie likes to glorify socialism, but if you look at the greatest engine of prosperity the world has ever seen, it’s the American free enterprise system.” It sounds emphatic and profound, but it’s simply a lie. American greatness is a consequence largely of state investments in research, infrastructure, and working people.

Perhaps the best moment of the debate came when a Danish conservative pressed Sanders on the issue of raising taxes to pay for public goods, saying, “You would like to spend as a Scandinavian but not tax as one.” Sanders then explained something to the American people that they haven’t heard in decades: higher tax revenue, properly allocated, can mean enormous benefits, both in services provided and overall money saved. As the Dane confirmed, in Denmark, a doctor’s visit typically has a $10 copay, a hospital stay is free, and the government actually pays a stipend to college students.

Essentials like healthcare and education should be publicly funded. It could actually lower costs for millions of Americans because they will be subsidized by the taxes of higher earners, and because governments don’t have to turn a profit. Private insurers do, which leads to skyrocketing costs and cruel denial of coverage. The average American, as Sanders put it, would be better off to “pay $3,000 more in taxes and see a $5,000 premium to a private insurance company disappear.”

The GOP’s radical anti-tax agenda has been funded and pushed aggressively by millionaires and billionaires, who can easily afford the best private services and gain nothing by public investments. Their cover story is that lower taxes for the rich means greater investment in the economy and more jobs. But more wealth is already concentrated into fewer hands than at almost any point in American history, and American workers aren’t receiving the benefits.

Currently, American companies have an estimated $2.4 trillion stashed overseas. The Koch brothers, major patrons of Republicans like Ted Cruz, hold nearly $100 billion between them. No Republican has ever explained what a tax cut for the Kochs, netting them a few billion dollars more, will do for the economy or the American people that their already enormous wealth can’t. This is the simplest counterpoint to the longstanding Republican lie of trickle-down economics.

Americans should have a conversation about what to pay for with their tax dollars, and from that conversation should emerge a picture of our tax structure. Instead, tax cuts are the first agenda item, no matter how much must be taken away from ordinary Americans. Rather than invest in the American people, Trump and the GOP want to redistribute wealth further upward, dismantle programs that reign in the dangerous excesses of industry, and leave millions of vulnerable Americans without the protections they need.

Support for universal healthcare is now at 60 percent, the highest it’s been in decades. One recent poll found that 63 percent of Americans, including a plurality of Republicans, support making four-year college tuition-free. Meanwhile, a meager 28 percent of Americans support Trump’s tax plan, and 65 percent think large corporations pay too little in taxes. Government policy couldn’t be less reflective of public opinion.

Republicans appeal to America’s past greatness, then strive to dissolve everything that made it possible. They long for a return, not to the era of public investments and a prosperous middle class, but to the Gilded Age of business kings and abused serfs. Americans don’t want the GOP’s radical agenda. Overwhelmingly, they want a greater allocation for public services and benefits. For that, we should look to the progressive era – the era of higher taxes, activist government, and growing prosperity.