The Second Amendment, the NRA, and the quest to militarize American life 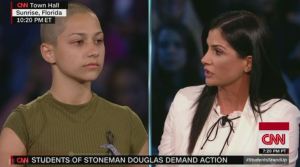 The Second Amendment to the United States Constitution is one of the most hotly debated pieces of text in history. For devotees, it guarantees the most important freedom ever enshrined in a government document. For critics, it is a dangerous relic of colonial history with little relevance to modern life.

Conflicting interpretations come about, in part, because of the text’s unusual opacity. In full, the Second Amendment reads, “A well regulated Militia, being necessary to the security of a free State, the right of the people to keep and bear Arms, shall not be infringed.” Strangely, those who most vocally champion the Second Amendment usually ignore the first half of it, while those who argue for a more restrictive reading consider the passage in its entirety.

Legally speaking, the notion that the Second Amendment protects an individual’s right to own arms for personal use is new, originating in the 2008 Supreme Court case District of Columbia v. Heller. Prior to Heller, the Supreme Court always considered the Second Amendment with regard to a well-regulated militia. In 2016’s Caetano v. Massachusetts, the Supreme Court further clarified an individual’s right to “all instruments that constitute bearable arms, even those that were not in existence at the time of the founding.”

Heller and Caetano were enormous victories for the National Rifle Association. Founded in 1871, for its first 100 years or so the NRA dedicated itself to education, training, and hunting advocacy. A former president of the NRA, Karl T. Frederick, testified before Congress in 1934, “I do not believe in the general promiscuous toting of guns. I think it should be sharply restricted and only under licenses.” In the 1970s, the NRA radicalized and began to push for a reading of the Second Amendment that eliminated all restrictions on gun ownership. As Brennan Center for Justice President Michael Waldman explains, “They supported a lot of scholars and law professors. They elected politicians. They changed the positions of agencies of government. They got the Justice Department to reverse its position on what the amendment meant.” Their campaign dramatically shifted the prevailing public and legal viewpoint.

Even after these enormous gains, the NRA remains relentless. Its present goal appears to be nothing less than the militarization of every corner of American life. To combat school shootings, the NRA proposes we arm teachers. The NRA “opposes expanding firearm background check systems,” despite a whopping 97 percent of Americans expressing support for universal background checks. On NRA TV, the group unleashes full-scale fascist propaganda, attacking the “extreme ideology” of mainstream media and the left with a “clenched fist of truth.”

Their hostility is born of a persistent paranoia about Democrats, Hollywood, gangs, leftists, immigrants, government, and most recently, activist schoolchildren. For the NRA and its members, guns represent a way of life, a political philosophy, and a business model all at once. They see guns as the most essential tool of liberty, used to put food on the table, defend the home from criminals, and if necessary, fight the government. The NRA regards gun regulation of any kind as unconstitutional tyranny.

Though it’s commonly interpreted this way, nothing in the Second Amendment explicitly suggest that its intent was to equip citizens with the tools for anti-government revolution. Historically, the Second Amendment has actually served those in power more than it’s been used to oppose them. As historian Roxanne Dunbar-Ortiz argues, “The militias referred to in the Second Amendment were intended as a means for white people to eliminate indigenous communities in order to take their land and for slave patrols to control black people.” 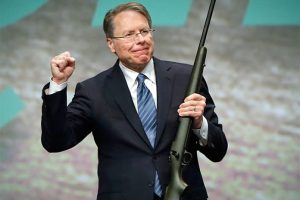 NRA President Wayne LaPierre uses racial dog whistles to rile up the primarily white men who make up his organization.

Dunbar-Ortiz’s view is controversial, but the connection between gun culture and American racism is impossible to ignore. The rhetoric of today’s NRA is littered with racial dog-whistles. NRA President Wayne LaPierre makes frequent mention of the crime in cities with large black populations like Baltimore and Chicago, warns about “illegal criminals” crossing over the Mexican border, and once said of President Obama, “Eight years of one demographically symbolic president is enough.”

When it comes to people of color, the NRA has frequently fallen short in its professed goal of protecting Americans against government tyranny. The group despises Black Lives Matter, an activist movement born purely out of a desire to combat state violence. When Philando Castile was executed by a police officer after announcing he carried a lawful weapon, the NRA was silent. In 1967, the NRA actually helped then-Governor Ronald Reagan pass an open carry ban in California purely to suppress the armed Black Panther Party.

People of color have far more compelling reasons to arm themselves than the aggrieved whites to whom the NRA usually signals. In 2017, police killed nearly 1,000 Americans, a disproportionate number of whom were black. Protests over police killings of unarmed black men have been met with militarized showdowns and incitement of riots. In 2016, state and private security forces attacked members of the Standing Rock Sioux for protesting construction of the Dakota Access Pipeline, imprisoning them in conditions so inhumane they were condemned by the UN.

Any serious discussion about reducing violence in America must go even further than the much-needed reform of gun laws. Our goal as a species should be to reduce all violence. To that end, the noblest thing we could do is demilitarize our state – which, for the last several generations, has been, as Dr. Martin Luther King put it, “the greatest purveyor of violence” domestically and the world over.

It’s no mystery why some groups would want to arm themselves against the US government. But Second Amendment fundamentalism sets up an arms race between the state and its citizens, as well as between citizens and other citizens, and implies that the strongest and most violent deserve to run society. The Supreme Court’s clarification that the Second Amendment protects “all instruments that constitute bearable arms” seems to exclude fighter jets and nuclear bombs, but it may not be long before the NRA challenges that, too. Citizens in many states can legally own flamethrowers and grenade launchers.

Despite the enormous difference in firepower between citizens and the state, gun holders do occasionally enjoy victories over the government. In January, a judge dismissed charges against the far-right extremists of the Bundy clan, who had seized a federal building and faced down the Bureau of Land Management with rifles. But this case demonstrates the silliness of using guns to arbitrate disagreements. The Bundy clan was in the wrong, degrading public land for private profit and paying no taxes. The interests of the NRA, people of color, the state, corporate America, and the working class are disparate and, in some cases, directly at odds.

Guns have a tendency to amplify all forms of violence. Poverty is perhaps our greatest national source of violence, depriving some 43 million Americans of adequate access to basic needs like shelter and healthcare – dire situations that are exacerbated by the presence of guns. Many of the deadliest domestic terrorists have come from the bowels of the growing white nationalist movement, and they’ve used their easy access to guns to slaughter dozens of innocent Americans in grotesque acts of carnage.

Retired Supreme Court Justice John Paul Stevens recently called for the repeal of the Second Amendment. That may be extreme, but no matter what changes we make to our gun laws, they won’t be enough on their own. We must take the extra steps of addressing violence everywhere, placing the Second Amendment in its proper historical context, and considering what it means in 2018, all without sacrificing important civil rights.

As pushed by the NRA, today’s radical reading of the Second Amendment is an open door to civil war. Citizen arms may still be necessary, however, for marginalized groups to protect themselves against corporate encroachment or state aggression. Rather than arm citizens with ever-deadlier weaponry, we should demilitarize our state and corporations. Either we strive to reduce violence and firepower in every corner of society, or we continue to suffer the deadly consequences that come with the arms race and militarization of American life.