Activists gather on the steps of the Capitol Building in Washington, D.C. to protest money in politics and fight to overturn Citizens United.

Those who get their news primarily from the television may have missed the record-breaking protests going on in Washington, D.C. over the last week. Activists hoping to bring a “Democracy Spring” to the U.S. have been demonstrating against the corrupting influence of money in politics. More than 1,400 of them have been arrested since protesting began on April 11, breaking the arrest record for “non-violent direct action protests in Washington for a single week,” according to The Nation.

But mum’s the word in corporate media. According to The Intercept, in the days following the start of protests the three major cable networks devoted less than 30 seconds of coverage to them. CNN didn’t mention them at all. MSNBC talked about them for 12 seconds. FOX News talked about them for 17 seconds. Even then the networks missed the point, characterizing the activists as pushing “for improved ballot access and voting rights.” END_OF_DOCUMENT_TOKEN_TO_BE_REPLACED

Bernie Sanders vs. the DNC and the bubbling of new American political parties

Sanders’s refusal to attack his fellow candidates lead to an iconic moment in the first debate, seen as a win for Clinton, when Sanders said the country was tired of hearing about her “damn emails.”

If you aren’t following the 2016 presidential election closely, you could be forgiven for thinking there’s only one party in the race. With dozens of candidates and at least half a dozen potential frontrunners – including Donald Trump, Ben Carson, Ted Cruz, Marco Rubio, Jeb Bush and Carly Fiorina – Republicans have dominated mainstream media headlines and defined the national political conversation.

Not that anyone would notice, but there are still three Democrats vying for their party’s nomination. Unfortunately, the Democratic National Committee has opted for a policy of hiding them from public view. Not every Democratic candidate agrees with this policy – least of all Vermont Senator Bernie Sanders, who has repeatedly called for more debates and whose insurgent candidacy desperately needs mainstream exposure to pose a serious challenge to Hillary Clinton.

If the country winds up with President Trump or President Cruz in 2017, much of the blame can be put on the shoulders of Debbie Wasserman Schultz, chairwoman of the DNC. END_OF_DOCUMENT_TOKEN_TO_BE_REPLACED

On June 30, the Supreme Court handed down one of its most publicized decisions in years. In the case of Sebelius v. Hobby Lobby, the court insisted the “closely held” retail giant was under no obligation to provide its employees with certain kinds of contraception coverage under the Affordable Care Act.

It’s a decision that’s being heralded on the right as an exemplar of constitutional adherence and derided on the left for being yet another barbarically regressive restriction on women’s access to healthcare.

It is much more the latter than it is the former.

Hobby Lobby is owned privately by the Green family, a phenomenally wealthy group of individuals who also claim to be devout Christians. They successfully argued that the portion of Obamacare mandating that an insurance plan cover contraceptives like birth control forced them to counter their religious beliefs.

The Green family may or may not actually be opposed to contraception on religious grounds, but their objection to the contraception mandate is purely an economic one. If they truly felt that contraception was an unconscionable evil, Hobby Lobby would not have $73 million invested in companies that produce it. The religious argument is an obvious smokescreen, meant to conjure up support from Christian conservatives and generate a thin constitutional argument.

Protester Julia Mitchell holds up a sign as the Hobby Lobby case gets underway at the Supreme Court in March. The overt sexism of a case in which five men determined the fate of birth control for a whole nation’s females has been one of the most controversial aspects of the case. Image via ThinkProgress.

Another of the Supreme Court’s most famous recent decisions was in Citizens United v. FEC, where the court extended first amendment privileges to corporations. In doing so, the Supreme Court, and many of those who support Hobby Lobby’s cause, demonstrated a fundamental misunderstanding of what a corporation is.

Regardless of whether it’s owned by shareholders or by a family – which is, presumably, what the court meant by “closely held,” although the term is probably intentionally vague so as to be applicable whenever a corporation wants to apply it – corporations are not “people” in need of Constitutional protection. They are, essentially, autocratic, private governments. They want the right to treat their employees anyway they see fit and govern their own affairs according to their own constitutions, and the Supreme Court, as well as countless right-wing commentators and legislators, want very dearly to give them that right.

Telling a corporation what to do is one of the greatest cardinal sins in the eyes of the right wing. Most Americans are in no position to negotiate at all, desperate to accept whatever they can for fear of being discarded by the system entirely as government aid is aggressively stripped away.

That arrangement is perfectly acceptable to Republican lawmakers, who have waged an out-and-out war on working Americans for a century. They talk of de-regulation, lowering taxes at the expense of government aid and slashing the minimum wage. Corporate profits and Wall Street earnings are as high as ever, and in many cases, much higher; but they still want more. Sebelius v. Hobby Lobby is just one more case in which “liberty” and “freedom” have been hurriedly granted to the corporate giant requesting it and denied the poor people who really need it. 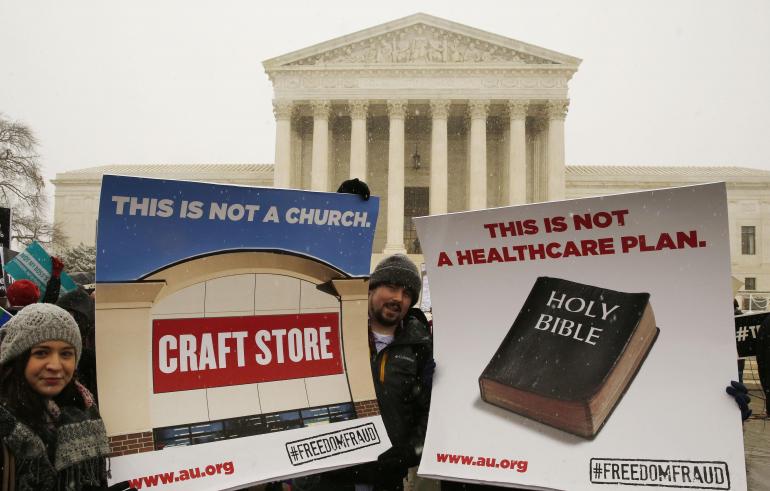 Mother Jones ran the headline, “In Hobby Lobby Case, the Supreme Court Chooses Religion Over Science.” It’s easy to see what they mean – “birth control” is often associated with rampant, wanton sex, which the Christian right just can’t allow people to get away with. But birth control is actually a vital health need and an extremely useful method for proper family planning. The medical and social demands of birth control are more vital now than ever before, as the nation stagnates in widespread poverty and overflows with unwanted children who parents lack the means to care for and who lawmakers don’t want to help. But the science vs. religion interpretation of the case almost gives the court too much credit – the justices understand fully well that this case is really about the rights of employers to deny their employees benefits.

Another commentator argues that Hobby Lobby’s victory here should obligate them to provide excellent family benefits. If the women working for Hobby Lobby cannot afford birth control and end up with an unwanted pregnancy, will Hobby Lobby grant them leave? America lags woefully behind the rest of the developed world – and much of the underdeveloped world – in this department: parental leave, if granted at all, is often way too short, and working parents struggle with finding the time and the money to take care of their children. But those who are hopeful that Hobby Lobby will make up for the birth control deficit with outstanding family benefits ought not to hold their breath.

The for-profit dream is the formation of an America where corporations enjoy limitless profit, unburdened by the nagging costs of worker benefits, environmentally responsible production and livable wages. These good things have been fought ruthlessly by corporations under the pretense that corporate profit is good for everyone, and the more of it the better. But if corporations lobby extensively against environmental protections, operate massive propaganda campaigns dedicated to convincing Americans that government aid is bad, do everything they can to get out of paying taxes, and are willing to take a fight all the way to the Supreme Court over their intense desire not to spend money on basic healthcare for their workers, how much good is corporate profit really doing for society?

Hobby Lobby’s decision to fight against the contraception coverage mandate of Obamacare just goes to show how very concerned they are that their money not be used for anything that isn’t their own grotesque enrichment. That’s what that “individual spirit” Republicans are always talking about really refers to – people have to knock off this nasty habit they have of pestering employers for things like good wages, benefits, work/life ratio and a decent standard of living and earn those things for themselves.

Clearly, work is no longer the way to a good life. Marx was right to regard the employee-employer relationship as a profoundly antagonistic one. Many Americans “fortunate” enough to have jobs suffer from low wages, grueling hours, cruel bosses and ever-worsening benefits. Yet all we hear, even from commentators on the left, is how important it is to get Americans back to work, and how the way to do that is to make America better for business. With soaring profits and the Congress and Supreme Court on their side, it’s hard to imagine how much better things could really get for big business. The American people are the ones who are desperately in need of a victory right now, and the Hobby Lobby decision is a firm, forceful, sexist slap in the face of every single one of them.