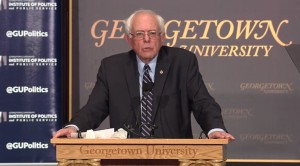 Bernie Sanders lays out his vision of democratic socialism to a crowd at Georgetown University.

Millennials might be willing to embrace socialism, but the word has been a liability for self-defined democratic socialist Bernie Sanders’s presidential campaign. It was the focus of his first question at the first Democratic debate. To his credit, Sanders has not tried to distance himself from the word. Instead, on November 19 Sanders delivered a powerful, campaign-defining speech at Georgetown University outlining his vision of democratic socialism and the future of the nation. END_OF_DOCUMENT_TOKEN_TO_BE_REPLACED

Voting for Bernie Sanders will be a pleasure

Of the last seven presidential terms, only Barack Obama’s two have not been held by a Bush or Clinton. Preliminary media coverage is already predicting the 2016 ticket will be Jeb Bush vs. Hillary Clinton, keeping the dynastic tradition intact. A more depressing – not to mention less democratic – prospect is difficult to imagine. But Americans are lucky to have a candidate who promises to shake up our lesser-of-two-evils politics in 2016: Vermont Senator Bernie Sanders. END_OF_DOCUMENT_TOKEN_TO_BE_REPLACED