In Albuquerque, citizens seek protection from the protectors

If you move through city streets fearful of being assaulted, you better keep one eye on the police – especially if you live in Albuquerque.

Since 2010, police have killed 25 people in New Mexico’s largest city. For every 20 people murdered there, police kill an additional three. Put another way, in Albuquerque, you’re approximately 15 percent as likely to die at the hands of a police officer as you are a common thug or a spurned lover.

Hostility between the Albuquerque Police Department and the citizens has been boiling over for months, and it reached a peak following the release in March of a disturbing video that showed police killing an unarmed, mentally ill homeless man named James Boyd. Mounting protests in the wake of this spate of killings led to a tense confrontation between the city’s government and its population on May 5. Protestors commandeered a meeting at the Albuquerque city hall, calling for a citizen’s arrest of the chief of police and issuing demands.

Media coverage has been limited. Several outlets ran a tedious story with the headline, “What’s Next for Troubled Albuquerque Police?”, as though the real story is the APD’s struggle to move on from their public scrutiny and not the citizens’ outrage over the deaths of their friends and loved ones. “Angry protesters… shout[ed] at council members and caus[ed] such a ruckus that the panel’s president adjourned the meeting,” the story said. Notice that vivid descriptions of the activists’ misbehavior are plentiful, but for police, the language is more reserved and cautious, even as the story describes their lawless executions.

Worse still, the L.A. Times had this to say: “The council had tried to meet Monday, but adjourned early when rowdy protesters took over the meeting – sitting in council members’ chairs and even eating their Girl Scout cookies.” It’s stunning that a news outlet would even mention sitting in chairs and eating Girl Scout cookies when the discussion is supposed to be on deadly, excessive police force.

Albuquerque may be an extreme case of the law spiraling out of control, but it is far from unique. Heart-wrenching statistics about wrong-door raids and petty crimes being met with deadly violence tell a tale the media won’t touch: excessive police force is a systemic problem, not the result of a few bad eggs. It is routine; daily; even hourly. It runs the gamut from the absurd – a whole team of officers detained a female jogger for jaywalking in February – to the outright hideous, as in the cases of James Boyd, Robert Saylor and countless others.

A symbolic casket bearing the names of people killed by APD was carried to police headquarters. Photo by Luke Montavon, The Jackalope.

Despite this, and even as more and more of the general population awakens to the reality of routine police cruelty, city officials, congressmen, judges and the U.S. President can say nothing critical of law enforcement without paying an enormous political cost. It’s somewhat mysterious why: on paper, there’s almost nothing in America failing as spectacularly as law enforcement.

Even as the crime rate declines, the use of paramilitary tactics by police escalates. No matter how badly they screw up, there are a plethora of defenses for police to choose from, including the standby, “It’s a dangerous job.” Statistically, being a police officer is far from the deadliest job in America, but a certain degree of risk is entailed. Yet it’s precisely for the assumption of that risk that police are held in such high esteem in the first place. By dressing police up like storm troopers and letting them shoot at anyone who might or might not be holding something that might be a weapon, we take nearly all their risk away and assume it ourselves.

As Radley Balko demonstrates in his crucial “Rise of the Warrior Cop,” both the Pentagon and private defense contractors capitalize on departments’ soaring federal funds, inundating them with unneeded weaponry. Thus, you get perverse statistics like this, from Balko’s book: in 2010 in Johnston, RI, population 28,769, the police department received $4.1 million in surplus military gear from the Pentagon, including 30 M-16s, nearly 10 million rounds of ammunition, a “sniper targeting calculator,” 44 bayonets, 12 Humvees and 23 snow blowers. With so many toys and so little crime, it’s no wonder that police use excessive force on every superficial offense, from low-level drug possessions to barbering without a license. 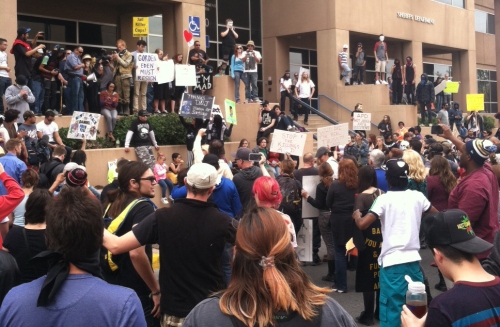 Protesters occupy APD headquarters in March to protest the death of James Boyd.

What’s happening in Albuquerque is truly inspiring. It deserves to be a much bigger news story than it is. As the indictments pour forth on the APD, including a Department of Justice report that documented a pattern of excessive force and poor training, citizens are taking action to ensure that police don’t weasel their way out of the criticism with a few meaningless press conferences and payouts. The city appears to be listening, with Mayor Richard Berry promising changes even before the DOJ issues its recommendations.

Police departments across the nation are rampant with guns and tanks and narrow on compassion and empathy. It’s time to overhaul their militarization and warrior mentality. Law enforcement should be an ally to the people, not the people’s most feared adversary. If change can happen in Albuquerque, it can happen anywhere – we just have to have the courage to demand it.

2 thoughts on “In Albuquerque, citizens seek protection from the protectors”