There’s a reason Elliot Rodger, the shooter and stabber who murdered six people and injured more than a dozen others at UC Santa Barbara over the weekend, thought himself a victim: he was a white man who didn’t get what he wanted.

That’s a crucial characteristic of this story, a more important profile than perhaps any other, and it’s so consistent you could set your watch to it. Lots of people died? Chances are a white man pulled the trigger. Serial killers, polluters, corporate honchos, Republicans – nearly all are white men.

Discussions of white privilege have been cropping up more and more, even in mainstream news, but its existence is still vehemently denied by – who else – white men. Thankfully, Elliot Rodger wrote a 140-page manifesto and posted numerous YouTube videos that leave virtually no doubt about it: because he was a white man, he simply could not deal with a world in which beautiful women weren’t throwing themselves at his feet.

His videos are a truly bizarre artifact. There aren’t many times in history where a murderer leaves such a complete video diary of what drove him to kill. If it weren’t for the fact that he went ahead and did it, you might not take him seriously at all – in one video, he has to interrupt his monologue to get out of the way of a moving car, and in the final video, his “evil laugh” is so unconvincing it deserves a Razzie.

Apart from one parent’s desperate, refreshing plea that someone in charge confront the issue, the killings haven’t resulted in much renewed focus on the gun debate. It’s a shame – Rodger’s firearms were purchased legally, and likely for the sole purpose of this rampage, so if anything, it’s a textbook example of too-easy gun access leading to death and a case where a “good guy with a gun” would have been ineffectual (it took four armed, trained cops to halt Rodger’s drive-by rampage). But mass shootings are such a banality in the U.S. that many of them don’t even get reported on at all, let alone generate rich, status quo-changing dialogue.

Were it not for his manifestos, Rodger’s spree might also have been just another blip in that sordid litany of American bloodbaths. But those sociopathic declarations demand further analysis. They reveal not just an insane person with broken wiring, but someone who’s been inundated in a world where sex is a commodity to be taken by white men at their whim from passive female bodies.

Elliot Rodger takes the “nice guy” angle to an absurd degree. Google “Nice Guys of OKCupid” sometime – it spotlights the ridiculous profiles of men on dating sites who claim to be nice guys, and who claim to be unable to score a mate because of that handicap. It’s not uncommon – and indeed, Rodger’s videos are littered with it – for such a man to express a sentiment like, “These stupid bitch sluts just can’t see how swell I am.” Rodger took that mentality to a horrifying extreme, and different men’s rights activists (MRAs) have been understanding or even, depending on your reading, supportive.

The problem is definitely not Rodger’s inability to get laid. Women – and it’s embarrassing to even have to say this in a country that’s not an Islamic totalitarianism – have as much right to choose their partners as men. And his romantic issues certainly had nothing to do with his being too nice, which should seem obvious enough in hindsight. His problem had to do with his inability to take “no” for an answer. In this proper context, he isn’t the victim of female rejection, but of an immense sexual pressure that begins in high school, continues well into adulthood, and is reinforced by movies, TV, magazines, music and, especially, advertising. The reason he couldn’t take “no” for an answer is because he lived in a society that preaches female availability and parades cartoonish female caricatures on magazine covers and TV shows with the same sensitivity as a can of Coke or a McRib.

“I really just wanted Tic Tacs… oh, OK, I’ll take that one on the middle-right, and uh, two of the bottom-left. Does Megan Fox cost extra?” (Photo taken from a TED talk by Sam Harris)

It is true: if women were more available and more submissive, and Elliot Rodger had been able to get one of his own, the killings last weekend would probably not have happened. So that’s one way to fix the problem. Another, healthier option is to stop marketing sex as an entitlement to men, and to stop reinforcing the view that women exist merely as reflections of their man’s status.

Ultimately, that’s what Rodger couldn’t stand, and he all but says it himself: he’s sick of seeing women riding off with other men and he’s sick of his lonely existence, but more so than that he despises the insult to his social status, his masculinity and his perceived good character that rejection made him feel. Chances are Rodger had occasion to turn down several girls in his lifetime, even if he didn’t know he was doing it. Yet you don’t see conventionally unattractive women engaging in shooting rampages because of the way society rejects them. Whether their motives are personal or political, you only see white men doing that, because they just can’t take “no” for an answer.

There is no injustice, nor even inconvenience, that can be done unto white men without their screaming, “Victim!” And they consistently get away with it. Conservative radio is filled with straight-faced laments about the decline of white man’s rule and the encroachment of rogue elements like women and the poor. They’re men with a bottomless bowl of soup whose righteous indignation is strongest when they’re raging over the desperate masses trying to lap up a little bit of what’s spilled over. Even in the wake of his murdering six people, much media focus has been pinned on the completely innocent woman who spurned Rodger as though she ought to share in the blame. If that doesn’t spell out the absoluteness of white male privilege, it’s hard to know what would. 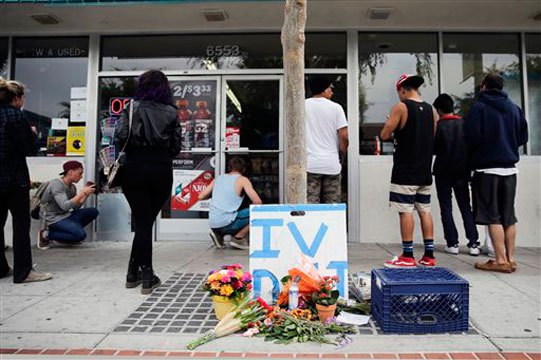 Spectators and mourners gather at one of Rodger’s murder sites.

Elliot Rodger fits the profile of the mass murderer to a tee. Were he and his mass-murdering kin anything other than white men, there’d be serious discussions on the poorness of white male culture, white men’s absence of strong role models, and so on. The struggle to keep these kinds of mass killings from happening in the future has to be waged on multiple fronts, including reformation of gun laws. But as with all criminals, it’s important to address what’s going wrong inside these men’s minds, and a critical look at society’s coarse attitudes concerning sex, privilege and masculinity is a good place to start.