Last week, the nearly half-million residents of Toledo, Ohio were given a grim warning: “Don’t drink the water.” Due to an enormous toxic algae bloom on Lake Erie, dangerous levels of the poisonous bacterial product microcystin entered Toledo’s water supply, prompting Governor John Kasich to declare a state of emergency.

I don’t mind telling you I’m from that area. I live in Texas now, but regularly entertain thoughts of moving home, partly because of the water. The Great Lakes region – the world’s most plentiful freshwater source – may one day be a mecca amid widespread desertification. But if the water is poisoned, it’ll hardly remain attractive for long.

Officially, the emergency in Toledo lasted only a couple of days. But scientists and officials warned the algae bloom would be an issue well before it happened and abundant algae has been present in Lake Erie since at least 2011. Although the lines are now clean, the bloom is far from gone – in fact, it’s visible from space. 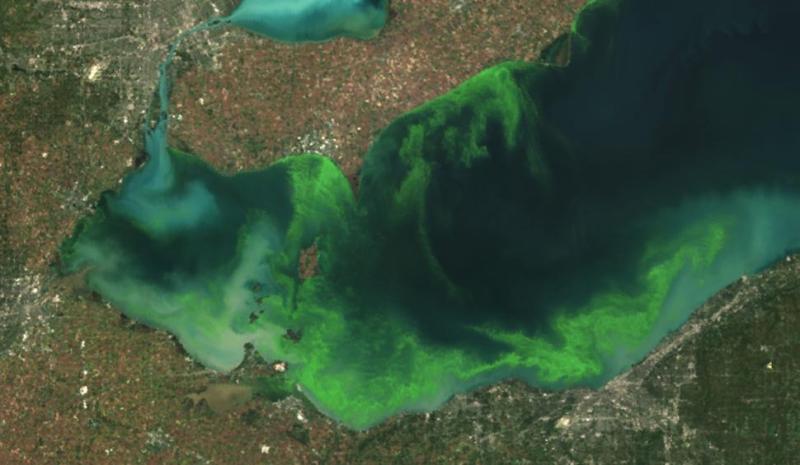 The algae bloom from space, circa 2011. Toledo is off the westernmost tip of Lake Erie.

According to an August 4 press release, “Consistent test results have shown microcystin no longer exceeds the recommended drinking water warning of 1 microgram per liter standard set by the World Health Organization.” In other words, there’s still microcystin present in Toledo’s water, but it’s at a considered safe level. At unsafe levels, ingesting it can result in nausea, diarrhea, vomiting and more. Over the weekend when the water was unsafe to drink, it could still be bathed in, but only at low temperatures; evaporating water concentrates the bacteria, leading to rashes and hives.

It’s starting to sound like the distinction between safe and unsafe is rather arbitrary. “Safe” seems to simply mean whatever won’t cause significant health consequences immediately. As with poisons in food and industry, what’s “safe” for you is what “saves” an entity from liability. Little bits of poison are always OK. Like working in asbestos removal: contract mesothelioma after you retire so the company can maintain plausible deniability.

Still, the human digestive and immune systems are hardy enough to handle a little bit of toxic cyanobacteria. It’s great news that Toledo water now contains the accepted level of poison. But microcystin will break out again, in Toledo and elsewhere, and possibly soon. Scientists project the algae bloom will reach its peak density in September, with the capacity to affect the whole Lake Erie region, including Cleveland.

Since the Industrial Revolution, our profit-over-all-else path has pushed the environment to its breaking point. Even as all the available science prophesies our doom if we don’t change fast, companies continue to dump their waste wherever it’s most convenient and commit all manner of environmental atrocities.

The consequences are only beginning to arrive. Lake Erie algae exploded, according to National Geographic, because of nitrogen and phosphorous “from leaky septic tanks and from fertilizers used on farms and lawns.” In layman’s terms: agribusiness and municipalities are putting too much shit in Lake Erie.

As usual, the media is mostly useless. While plenty of stories have covered the fact that nitrogen and phosphorous fed the algae bloom, fewer have described the source of the elements and fewer still have been willing to accuse the culprits. Addressing the issue of whether industrial farming is to blame for the bloom, Josh Flesher of the AP writes, “That question leads to lots of finger-pointing,” and goes on to explain a couple sides of the story. Apparently AP is content to just repeat conflicting arguments – what are they supposed to do, investigate? Even scientists are a bit wishy-washy in condemning agribusiness, pointing to global warming, excess rain and wind patterns as exacerbating the problem. All these things are true, but at the end of the day, if shit wasn’t in the water, algae wouldn’t be flourishing.

Toledo residents stock up on bottled water, which, incidentally, is also extremely bad for the environment.

Years ago, “no-till” farming was adopted to slow soil erosion, but manure is more easily washed away by rainfall when it isn’t mixed into the soil. Like any good all-American industry, farmers hate being told what to do by the government, especially if it’s for the sake of public interest or the environment. But clearly, something else needs to be done. Organic, sustainable farming costs more, but contrary to popular belief, there isn’t a huge difference in yield.

Human waste is a huge and ongoing problem, but there are creative solutions, such as wastewater-consuming bacteria. Serendipitously, at the same time Toledo’s water crisis reached its peak, the Toledo city council reviewed a $521 million sewage expansion project to reduce overflows. City councilman Mike Sheehy called it a “no-brainer,” while councilman Larry Sykes, a Republican resistant to dealing with environmental concerns, says he’s woken up to reality: “They’re listening now. It‘s going to be like a corn field – a lot of ears.”

Complaining about the actions of rich industrialists who poison the world is like complaining about the weather. No one hears you, no one who does hear you cares and nothing can be done about it anyway. Policy is still motivated primarily by corporate profit, and that is a huge obstacle in addressing environmental problems. Toledo learned its lesson the hard way: nobody’s stock portfolio, profit margin or bank account matters in the fight for a healthier environment. When crisis came, the town dropped everything else to address it.

In the classic graphic novel Watchmen, the villain, Ozymandias, poses a threat so massive, the world’s people, no matter how bitter their disagreements, have no choice but to unite against it. Pollution and climate change are those threats in the real world. Many environmental battles are already long-lost; mankind must reap some of what it has sown. But hopefully it doesn’t take too many more algae blooms, super storms, droughts, oil spills and leaky nuclear reactors before the world collectively champions the environment as its number one cause.