Harris omits crucial context from the discussion on Islamic violence

Last week on Real Time with Bill Maher, a panel featuring one of the nation’s most prominent anti-religious voices, Sam Harris, discussed radical Islam. Harris made quite a few valid points, as he often does, and so did the rest of the panel – but they all managed to leave some important context out of the discussion that is crucial to understanding the hatred and violence consuming so many in the Arab world: a century of imperialism.

Since the discovery of its oil 100 years ago, the Middle East has been subjected to constant interference from one superpower or another, from the British creation of Iraq to the US arming the Mujahideen to the bombing campaigns of the two Bush presidencies. Harris acknowledges this history, but apparently regards it as not all that consequential, blaming the existence of Islamic violence almost entirely on the Quran. It’s remarkable that someone as intelligent and knowledgeable about the brain as he is would deny the role steady exposure to imperial violence has in fermenting extremism. 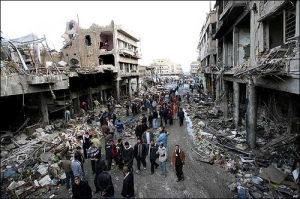 Here’s the question: are Muslims pissed off because the Quran tells them to be, or because of this? A Baghdad marketplace following a bombing.

Except for Ben Affleck saying, “We’ve killed more Muslims than they’ve killed us by an awful lot,” American-on-Arab violence isn’t even broached in the Real Time conversation. Regardless of whether you think it’s primarily American violence that’s catalyzing Mideast violence, surely it’s an important part of the conversation that a million or more Iraqis have been killed or displaced since the 2003 US invasion. For as big a deal as we make of war here, where bombs aren’t being dropped and where the streets are not filled with insurgents and gunfire, just imagine how big a deal the war is there.

But even that most basic exercise of empathy is forbidden in discussions about the Middle East. Perhaps the collective weight of American war crimes on our consciences would be too great a burden to bear. Whether or not American operations in Iraq, Syria, Afghanistan and elsewhere had benevolent intentions, the way they’ve been carried out and the consequences they’ve had for the region have been utterly disastrous, as almost everyone admits. Failure to understand what went wrong in a society after you’ve bombed it and tried to install a government favorable to you is just insanity.

In an illuminating interview on Democracy Now, reporter Nir Rosen, author of the book “Aftermath: Following the Bloodshed of America’s Wars in the Muslim World,” said, “Sectarian identity became more and more important [following Bush’s invasion of Iraq] …sectarian groups were pitted against each other… and this was very disturbing to the Iraqis, because they had never thought of themselves primarily as Sunni or Shia, and that had never been the overt, primary way in which you would attain power.” For Harris’s allegations of innate, violent Muslim sectarianism to hold up, the imperial history, the relative peace between Sunnis and Shias in pre-invasion Iraq, and the extraordinary death toll of a decade of bombing must be completely ignored. Not surprisingly, they usually are. 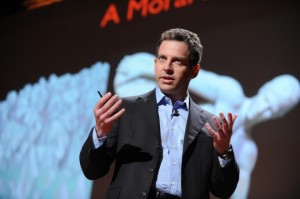 Sam Harris gives a lecture at a TED talk. Harris’s TED talk is a valuable lesson in the moral instruction science can offer.

Harris is often accused of being bigoted against Muslims. I don’t feel qualified to make a judgment on that. There isn’t any clear motivation for it if he is; he’d probably sell more books if he weren’t. He knows how to point out passages in the holy texts of all religions that any modern society would find morally repellant – Biblical endorsement of slavery and genocide, Koranic stoning of women and removal of the clitoris, and on and on. Inasmuch as his criticism of Islam is of the Quran and its ideas, and not the whole 1.5 billion of the faith’s adherents, Harris is not often wrong.

One good point he, Maher, and others make is that there is a moratorium on criticism of Islam as a religion in many politically correct circles. Such a restriction probably has more to do with liberal guilt than encroaching Sharia law or fear of Muslim retribution, but similar discretion is not so readily afforded to Christianity. There may be a number of reasons for this – Christianity’s omnipresence in American culture necessitates its criticism – but the bias is wrong. Every religion, including and perhaps especially Islam, should be drug through the grinder of open debate. They’re going to have to be if mankind is ever going to be rid of them.

The “concentric circles” analysis Harris makes of radicalism in Islam is interesting. In the center, smallest circle are actual jihadists like ISIS. Outside of them is a bigger circle that doesn’t participate in the violence but actively supports it. The further out you go, the less extremism you find. Harris assumes those hostile inner circles represent about 20 percent of the world’s Muslims, which is about 300 million people. It’s an extraordinary claim, and almost certainly much too broad, but it appears to be accurate to a forgivable degree – numerous polls show that anywhere between 15 and 40 percent of Muslims hold beliefs that are antithetical to a free society, including support for suicide bombers and holy war. Such Muslims live everywhere, from Turkey, Egypt and Jordan to the UK and Belgium. It’s a far greater number than the tiny minority supposed by liberals to exist. 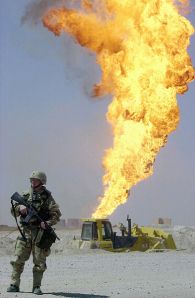 A US soldier stands guard at the Rumaylah Oil Fields in southern Iraq.

Still, such figures can’t be meaningfully looked at outside the context of US foreign policy. ISIS provides a solution to desperate Arabs who’ve had their lives ravaged – fulfill the mission of the Quran, interpreted as violently as possible by extremist clerics and organizers, and expel the infidels. Because people are suffering so terribly it’s able to catch on, not unlike Nazism in Weimar Germany. Much of the anti-western hostility expressed in the Muslim world comes from fear that their country could be the next in our crosshairs. Without the extensive grievances caused by imperial efforts to control Mideast oil, ISIS wouldn’t exist.

Note that plenty of fundamentalists hold extremist beliefs in America. The single-most dangerous position held by people in power is that the environment doesn’t require our attention, a fantasy justified primarily on the basis of Christian science denial and capitalist profit dogmas. Similarly, feverish Christians complicate the teaching of evolution, one of the most foundational and least controversial processes in science. Anti-homosexual hate speech pours out of the Christian right as brazenly as racism in the Jim Crow era. The gun lobby’s fanaticism has resulted in armed madmen full of hyped-up self-righteousness marching through towns and occupying businesses. The media now treats mass shooters as practically a banality. Propaganda masters on the radio and TV tap into the disillusionment of Middle America, fueling the fire by blaming gays, liberals, scientists, vegetarians – anyone but the people actually in charge of policy. Thankfully, apart from the science deniers, America is probably not in much danger of being taken over by such extremist elements, but if things were as bad here as they are in Iraq it would certainly be possible.

In the debate, Harris called Islam “the motherload of bad ideas.” There are a lot of bad ideas in the Quran, as there are in any religious text. But bombing people is also a bad idea. So is not taking care of the environment, the sick and the poor. If America devoted itself to pursuing clean energy for the entire world, it could eliminate the motivation for imperial powers to meddle in the Middle East over oil. Perhaps some of that extremism would go away when we infidels leave. Even if it didn’t, we’d be in a superior moral position to combat it with education and an inviting progressive example. There’s a maxim Noam Chomsky often repeats that gets to the heart of the problem of Mideast violence: the best way to stop terrorism is to stop participating in it.