If you don’t already, you should follow CopBlock on Facebook. It’s a page that collects examples, very often with video, of police bullying and brutality run amok in America, and the first thing that astounds you is the sheer volume of such incidents. Exaggerated police responses to low-threat situations drive a great deal of the mayhem in America’s streets, and more and more citizens are documenting the disturbing trend for generations to study and learn from.

Lots of outstanding research has been done on the subject. Two good places to start are Radley Balko’s groundbreaking Rise of the Warrior Cop, a comprehensive, scholarly study that nonetheless reads like a dystopian science fiction novel, and Mother Jones, which does a good job of collating and reporting useful data on the subject. 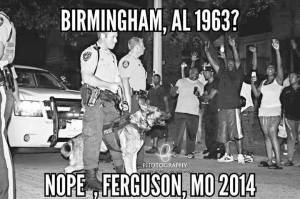 There are countless stories of soldiers returning from war and never being able to live down what they did. And it has nothing to do with the nobility of the conflict – even the “good wars” brought men home who were shaken by having to kill. Yet police officers are able to, for instance, shoot a homeless, mentally retarded man in the back without batting an eye. Apologies from police departments for such grotesque incidents are extraordinarily rare – it seems no matter how aggressive, over-the-top, and quick to use lethal force an officer is, he is exonerated by the department, by the courts, and even by a great deal of public opinion.

So long as it can be pretended that a police officer had reasonable suspicion his life was in danger, he can get away with anything. I hope it’s unfair to accuse every cop who kills an unarmed, nonviolent citizen of having enjoyed doing it. But if the majority of them really do feel their lives are in peril, and that they need to act out in the most lethal manner possible, then there is something seriously wrong with their psychology. To be that paranoid, that knee-jerk with lethal force, is uncalled for in the streets of America, where violent crime has actually been sharply declining for most of the last 20 years.

But this paranoia is a big part of what’s wrong with the average American police officer. Not all of them, of course – many, perhaps even most (although the jury’s still out) are intelligent, compassionate, reasonable, level-headed people. But their training – not to mention recruitment methods and philosophy – prepare them to face an America that is under siege from a powerful criminal element. This line of thinking has serious consequences for ordinary citizens who encounter police and has resulted in way too many outrageous, egregious instances of police using uncalled-for deadly violence. 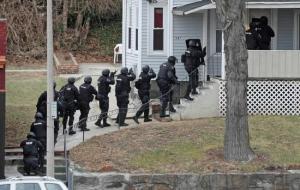 There is no war in America’s borders that calls for police to use the tactics they do. Almost nobody pulls a gun on a police officer. And I hate to be blunt, but the ones who do are an occupational hazard. In America’s Andy Griffith-inspired utopia – a world that, for a time, more or less existed in many affluent suburbs – police officers were widely regarded as upstanding pillars of their community precisely because they put their lives on the line. They ran the risk of bumping into one of society’s real rogue elements, the muggers, killers and armed robbers of the world. They still do run that risk, but by escalating every single minor infraction to the threat level of one of these highly unusual, serious offenses, police have made themselves a much bigger danger to ordinary citizens than ordinary citizens would ever be to them. All the risk of being a police officer has been placed on us: you’ve got to know how to handle a cop who’s approaching you; you’ve got to do whatever it takes to keep the conflict from escalating – which can often mean voluntarily ceding some of your basic constitutional rights.

There are a great many factors that go into why the police have become so militarized. The Pentagon feeds them surplus gear, budgets are spent on weapons and hiring more cops than on better-training current cops, the profession actually rejects candidates for being too intelligent, and on and on. But perhaps the most important factor driving the day-to-day violence is the persistent belief, reinforced by police training and the news media, that America is a hostile, dangerous, violent place. Police feel they are fighting a war, and it shows in their conduct.

The biggest war they’re fighting is on drugs, which, if you know any of the people who actually use drugs, you’d know doesn’t require armored vehicles and assault rifles. Drugs foster bad habits in good people, and are a threat to society on that level – but the militarization comes exclusively as a consequence of their black market status. Tobacco is sold in stores and kills thousands of people every day, but nobody is shooting cigarette vendors and smokers. Instead, sky-high taxes and education on the dangers of tobacco enabled people to make smart decisions about their smoking habits, and smoking is on the decline as a result. The biggest threat that comes from using an illegal drug is being arrested for it – but if we treated drugs with the same type of messaging as tobacco, it’d be far more effective than throwing people in jail or beating them half to death over it. 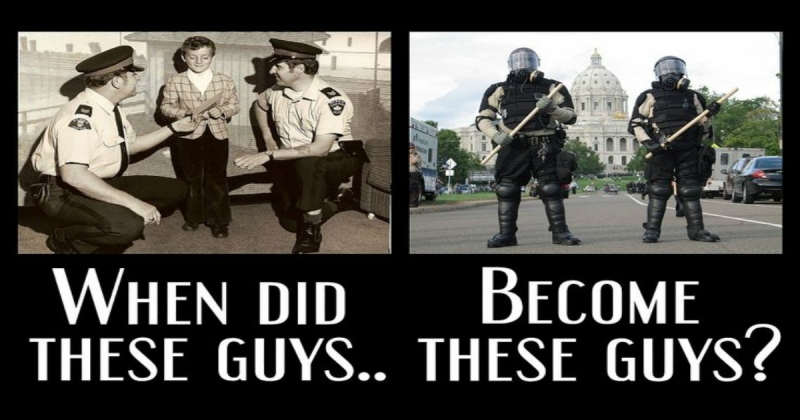 A simple message, but a poignant one.

We need a subtler approach to tackling all of society’s ills, not just drugs. A great deal more can be achieved through outreach, education and counseling than with clubs, guns and prisons, and probably a lot more cheaply. Police should be a force for this type of change, not a roving band of storm troopers trying to inspire lawfulness through fear and looking for a fight with every wanton jaywalker.

One long-standing trope of gun advocates is that guns don’t kill people, people kill people. There’s both fiction and truth in the statement. Getting rid of their armored vehicles and powerful munitions will go a long way toward reducing police violence, but the most important thing to do is to change the way police officers think. America is not a warzone, and we must keep overpowered, hyper-militarized police departments from turning it into one.