Say what you will about America, there’s one thing that’s undeniably true: people don’t like you to say what you will about America. Despite being the most powerful economic and military force on the globe for the last 100 years, our culture is quick to take offense at even the mildest of criticisms. Self-reflection has never been our greatest strength, making a list like this controversial.

Nonetheless, we face several crises together. Most commentators don’t consider 2014 to have been a “good news” year. Whether we realize it or want to admit it, this country’s business and political classes have committed inhuman crimes in our name, and they will continue to do so for as long as we let them. If, instead, Americans pledged to confront these issues openly and honestly, we could pave the way to a much brighter future. These are the issues activists, organizers, and opinion leaders should be hammering home in 2015.

Roll back the police state 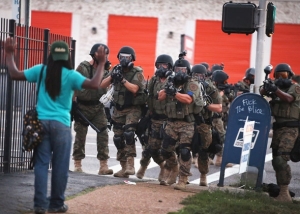 In response to escalating state-sanctioned violence, which has seen the lives of several unarmed men, women and children yanked away by overzealous, militarized police officers in broad daylight with impunity, police brutality became the biggest domestic story of 2014. Longstanding victims of police aggression, like minorities, activists and poor people, had little to be surprised by in the recent spate of killings and acquittals, but extensive media coverage and widespread protests galvanized the issue for the whole country.

Part of what makes the issue problematic is that criticism of the police is taken with great umbrage. In the thin-skinned fashion of most authoritarian institutions, New York Mayor Bill de Blasio’s mild empathizing with victims of NYPD violence was taken so offensively that hundreds of NYPD officers turned their backs on his speech during the funeral of a slain police officer. But the issue couldn’t possibly be with any individual cop; actually, there are far too many bad ones for the problem to be anything but systemic. It’s spent the last 20 or 30 years coming to a head, as the War on Drugs escalated, police departments acquired and deployed military-grade weaponry on Main Street, and our enlightened law enforcement credo of “Innocent until proven guilty” became “Shoot everyone, they might be dangerous.”

Our civilization, if indeed that is what we have, can’t survive an assault like this for long. The police absolutely need to be a force that serves the public good of the public, and they’re looking more and more like they’re here to protect their own and elite interests. Protesters are meeting ever-harsher and more sophisticated resistance in the form of teargasing, COINELPRO-style infiltration, propaganda and old-fashioned head-busting. Police should protect the public, not club them. A handful of specific, doable, and sensible solutions exist, and society should make them all resolutions: end the war on drugs, take away the rocket launchers and tanks from small-town departments, and restructure the justice system to create stricter apparatuses for police oversight by courts and civilians. 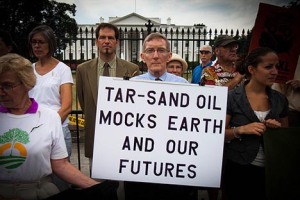 Activists protest the Keystone XL pipeline outside the White House. President Obama has not been clear on whether he’d allow the pipeline to be constructed if it passed through Congress.

This is another no-brainer that’s been on the docket for years and years. Oil’s dominance of our society, international politics, and our whole way of life is one of the great imperial accomplishments of history. Even in the face of no less an indictment than, “It’s destroying the world,” oil looms large. But, like other imperial forces, it must be overthrown.

Probably the biggest issue related to this, at least domestically, is the Keystone XL pipeline. This proposition demonstrates perhaps better than any other whose interests are in the heart of Big Oil. The economic benefits to America will be almost negligible, while the environmental consequences of digging up that much earth and burning all those Canadian tar sands are perilous. Yet TransCanada insists it’s essential, and it’s likely to be rammed through the Republican congress next year. Humanity definitely needs to elevate itself above the concerns of corporate profit when it comes to the future health and viability of the planet. The science is in, and its warning sirens could not be shriller.

We should be opening up no new infrastructure for oil. In fact, a huge part of the problem with switching to alternative energy is that our infrastructure is so heavily oil-dominated. The oil companies themselves propagandize this to justify their continued existence, declaring an infrastructural switchover too costly and essentially resigning our society to defeatism. In truth, infrastructural changes are not only necessary for the continued wellbeing of life on this planet, they would actually prove extraordinarily stimulating to the economy, putting millions of Americans to work. 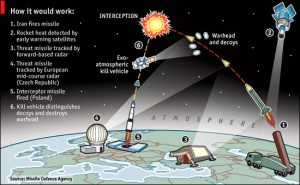 The proposed Eastern European missile defense system is widely seen as an offensive, rather than defensive, tool.

They don’t get much no-brainier than this. Depending on your political affiliation, America’s role in world affairs can be described as “policing the world,” “coming to everyone’s aid,” or “telling the world what to do.” Our right to do any of these is justified on the basis of America’s presupposed righteousness, so that if we’re overextending ourselves or even if we’re making mistakes here and there, it’s all for noble reasons. This is convenient, but the torture report, Obama’s drone campaign, Snowden’s revelations, and plenty of others have stripped away that illusion of nobility. There’s just no evidence to suggest that our foreign policy is conducted for any reason other than the security of regional business allies.

Worse than being ignoble, our so-called national security actually puts us in great danger. One way it does this is by creating extremism, both directly by funding terror cells and pitting them against rivals, and indirectly by carrying out extensive bombing campaigns that drive the friends and relatives of casualties to violence. Spying on us is a direct attack, so spinning that into a defense of freedom was a marvelous feat of propaganda. But perhaps most alarming is that tensions with Russia have been escalating as the United States ramps up its nuclear weapons program, imposes sanctions on Russia and places nuclear weapons in NATO nations near Russia, like Turkey. Tensions are also flared with plenty of other regional nuclear powers, including China, Iran and North Korea.

All of this bodes ill for the future not just of Americans, but the whole species. The only time most Americans hear anything about nukes anymore is in the hushed, grim speculations about North Korea or Iran. But no nukes are deadlier than our own, and to date in history we’re the only state to have ever actually used them in war. Ostensibly, they exist for the sake of deterrence, but positioning nukes around Russia’s borders is widely perceived as an act of aggression. Nuclear war is as dangerous a prospect as ever, if not more so, and it would surely doom the species. There’s really nothing more important for the whole world to agree on than eradicating nuclear weapons, and while we’re at it – why not try a whole lot harder to end war altogether?

Following these resolutions is only a start. Not all the world’s problems are America’s fault or ours to solve, nor are the problems listed here the only ones America faces. But if we pursued these three morally imperative causes, which arguably pose the most immediate peril, the effect we would have on the world would be fundamentally transformational. And it’s entirely up to us – our institutions of power are driven by compulsions of greed and domination and don’t give a damn about human rights, peace or the future of the planet. The beginnings of our best hope for a moral society are beginning in the police protests. There will be tremendous resistance, but hopefully, our appetite for justice only grows stronger from here.