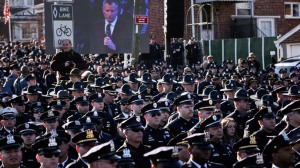 In times of tragedy, the first question the media asks is, “Who is to blame?” It’s a perfectly reasonable thing to investigate, but certain familiar patterns develop. In cases of serial killers, there’s usually an investigation into the killer’s background, interviews with family members, and so on. When the government is under investigation, there’s a long process of buck-passing that the media dutifully follows like a cat entranced by a laser. And in the case of political murders, blame is usually placed on the opposition party.

Since police militarization became a recurrent topic for mass media, there have been a handful of citizen-on-police killings and assaults, most notably the murder of NYPD officers Wenjian Liu and Rafael Ramos by Ismaaiyl Brinsley. And though virtually everyone has condemned the murders, they’ve nonetheless found their way to becoming a contentious political issue. The divisions, though approximately right/left, are perhaps more accurately defined as authoritarian/anti-authoritarian.

The pro-authoritarian side wants to fault what they consider a national anti-police mentality, brought on by protesters demonstrating against police use of unnecessary lethal force on unarmed citizens. In other words, speaking purely in terms of classes of people, it is the victims of police violence who are accountable for violence visited on the police. Those who oppose the idea that anti-police rhetoric inspired Brinsley usually point out his extensive prior criminal record and the fact that he’d already attempted to murder another person before traveling to New York. He was an insane multiple murderer, not a political actor.

There’s no question of Brinsley’s insanity. However, he doesn’t have to be sane for his crime to be considered political. Those who want to label it an assassination are going overboard. Assassination is generally used to describe the targeted killing of an influential figure; Brinsley sought to kill the first boys in blue he could. Others have tried to classify it as a hate crime on this basis, but declaring violence against the state a “hate crime” seems overly authoritarian even for this society. Regardless, the crime was definitely political. The killer openly declared the act revenge for the murders of Eric Garner and Michael Brown and posted his motives and intentions to social media. 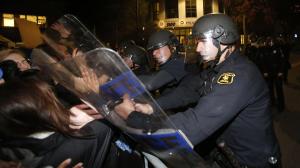 Police clash with protesters at a march against police brutality in Berkeley, California.

Admitting that, however, doesn’t put blame on the protesters. It certainly doesn’t put blame on Bill de Blasio, New York City’s mayor whose feud with the NYPD caused dozens of officers to turn their backs on him at memorials for Liu and Ramos. De Blasio, for his empathetic and, really, very tame thoughts on police-on-minority crime, is still the boss of one of the world’s deadliest fighting forces. He’s apparently one of the country’s most liberal politicians, which may be why he’s having such a hard time of things, but there’s nothing about him that would inspire radicalism and political murder.

Brinsley was insane, and that’s ultimately why he killed, but the protests and recent media focus on police brutality doubtlessly zeroed his attention in on the issue as his cause célèbre. Nobody acts entirely in a vacuum. But the vast majority of protesters are peaceful, working to end violence and suffering at great risk to their own persons and livelihood. So where else might Brinsley and others have gotten the idea that the way to address a problem is to throw deadly violence at it?

To answer that question, we should look at who in the world right now is attempting to solve problems with excessive, even deadly, violence. Judging from their treatment of peaceful protesters and the (probably under-estimated) statistic that they kill a black man every 28 hours, it looks like the police are using a lot of it. And lest we forget the government’s War on Terror and War on Drugs, both of which have claimed and devastated more lives than we know. When the state handles small-time drug dealers by breaking into homes late at night and throwing a stun grenade into the crib of a sleeping 19-month-old, why wouldn’t an unstable American come up with the notion that an appropriate response to police violence would be violence against the police?

If a serial killer’s parents were strict, domineering, abusive and cruel, we might well pin a lot of the blame for the killer’s subsequent violence on those factors. Yet no one applies this standard to killers like Brinsley, who, though undeserving of much sympathy, is certainly worthy of analysis. He had been arrested 19 times and surely spent a decent amount of time confronting correctional officers and enjoying the United States’ internationally condemned penal institutions. Surely these experiences had a profound impact on his inner turmoil. None of this justifies his actions, but it’s far more plausible than supposing liberal, anti-police propaganda duped him into his actions.

Those who use violence make violence a recourse. In that sense, if we want to find blame for the actions of killers like Brinsley, we need look no further than the state itself. When powerful institutions act with extreme violence, the population is likely to feel forced to respond in kind. The psychology can extrapolate from disenfranchised blacks fighting against police brutality to insurgents and Mideast terrorists taking arms against Western bombings and torture regimes. Anyone who kills innocents must stand trial regardless of the pressures they felt compelled them to do it, but the best way to fight such evils – whether they be familial, societal or geopolitical – is with more kindness, not more aggression.

It isn’t fair what happened to officers Liu and Ramos. But in no reasonable person’s mind could the blame for their murder lie with those who are working to end the brutality of state insitutions. As with any tragedy, it’s easy to be overcome with emotion, but the situation requires sober analysis. Looking at it the same way we would any other crime forces us to a clear conclusion: if state institutions don’t want to see violence visited upon themselves, they should stop acting violently.