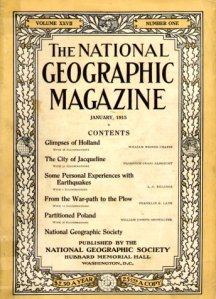 Rupert Murdoch, the Australian mogul who owns a vast media empire encompassing, among other important holdings, 21st Century Fox and FOX News, has purchased a 73 percent share of the National Geographic Society’s media assets for $725 million. The society will join with Murdoch in running National Geographic Partners, which will henceforth produce commercial National Geographic media.

Most notably, this includes the society’s revered National Geographic Magazine, published since 1888. And while the society will supposedly continue to play a predominant role in generating the magazine’s content, there is worry that its new, profit-oriented owner will compromise its strong editorial stance, particularly given Murdoch’s denial of man-made climate change. END_OF_DOCUMENT_TOKEN_TO_BE_REPLACED