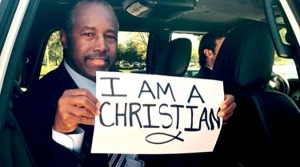 This image of presidential candidate Ben Carson has sparked a hashtag movement, but the FBI’s hate crime statistics show it’s hardly a bold or courageous stand.

Christians are experiencing grief and solidarity over reports that the Umpqua Community College gunman who killed nine people and himself in Oregon on October 1 was targeting their religion. There are conflicting testimonies about what the shooter, Chris Harper-Mercer, said to his victims, but all say religion was a theme in the killings.

Horrific as the massacre in Oregon was, it is not sufficient to establish the existence of a war on Christians. FBI statistics for 2013 show 116 hate crimes perpetrated against Catholics and Protestants out of nearly 6,000 hate crime incidents, or less than 2 percent.

But details like these don’t matter to the faithful. Persecution is central to Christian theology. The Bible tells Christians they will be persecuted and ridiculed. Regardless of the position they come to hold in a society, Christians remain defensive. But no strain of Christianity is currently experiencing a “down” period, at least not in America. Actually, the religion’s most visible and influential incarnations play an active role in keeping others down.

Well-financed Christian ideologues are behind some of the most destructive movements in the world today: the effort to defund Planned Parenthood, militarization of Israel, LGBT discrimination, the swindling of vulnerable Americans, turning science textbooks into rubbish, and even climate denialism. Yet it is the wealthy Christians in politics and the media behind these crimes against humanity who scream most hysterically about being victims.

Their position of privilege distinguishes anti-Christian violence from hate crimes against blacks, Hispanics, the LGBT community, women, and other religious groups. Those groups have a legacy of systemic obstacles. Discrimination, ridicule, and even violence against them has, at one time or another, been both culturally accepted and even written into legislation – often justified by Christians using the Bible.

So while it is not the case that there is a systemic plague of violence against Christians, it is important to condemn such violence when it does occur. Harper-Mercer’s attack could well be seen as a hate crime. But there is a real problem with framing the discussion as a war on Christians, apart from the fact that it’s inaccurate: Such a framing distracts from the incredible problem of ubiquitous firearm proliferation in America. 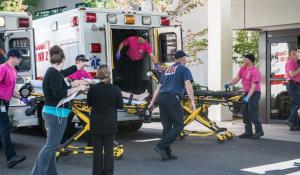 Gun supporters like to deflect calls for gun control by insisting the problem is really mental health. They’re hoping to do the same by painting Harper-Mercer as an anti-Christian crusader. In this case, the problem isn’t guns or our culture of violence. The problem is that the killer had a grudge against Christians.

We gained insight into the mental misfires of killers like Elliot Rodger and Dylann Roof by examining their activity on men’s rights and white power message boards. The toxic culture of misogyny and racism found there festers in the minds of killers even if other members say they don’t condone violence. To even begin alleging Christian persecution, there must be a similar network. So far, no such forum has been found where Harper-Mercer gave allusions to his heinous actions.

There certainly are indications the Oregon shooter was grappling with his spirituality, though. The most harrowing reports have him targeting Christians specifically; others claim he merely asked victims about their religion before shooting them indiscriminately. He maintained a profile on a dating site for spiritual people and allegedly wrote of going to hell in his manifesto.

But gun control opponents can’t have it both ways. If the Oregon attack was a volley in a war on Christians, and Dylann Roof’s killing of nine black churchgoers in Charleston was an attempt to start a race war, then the problem isn’t merely mental health. A soldier in a holy war may well be insane, but his actions have a rationale. The problem is that it’s too easy for people who want to hurt others, regardless of their motivation and level of sanity, to acquire the tools to do it.

This is the problem the gun lobby doesn’t want to address. It is certainly important to diagnose mental disorders or the family life of killers. Harper-Mercer lived with his mother, a gun fanatic who bragged about her arsenal on Facebook, and many mass shooters come from broken homes. And as gun control critics point out, many are still able to pass a background check. But it’s too cynical and defeatist to simply say “stuff happens” and learn to live with it. The one recurring thread is where the problem lies: the guns themselves.

Of course there are weapons other than guns that can cause mayhem, but it’s much more difficult to build and plant a bomb in a school than it is to walk in with a gun. And it’s inconceivable that a man with a knife or a sledgehammer could take nine lives in a single attempted massacre. Society will never be rid of those who want to do others harm, but as a nation it’s time that we agree, at the very least, to make their deadly desires more difficult. And that starts with restricting gun proliferation.