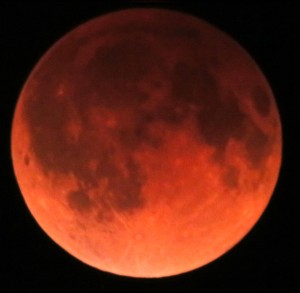 A “blood moon” on September 27 was treated by some religious conservatives as a godly omen.

Before the advent of science and the ubiquity of light pollution, human beings gazed up at the stars and ascribed great meaning to astral events, treating them as omens from the gods. Many of these mystified people still wander the earth, untouched by modern knowledge of gravity and geometry. They aren’t just hiding out in the Amazonian wilds, either; many of them follow Glenn Beck’s Facebook page.

On September 27 and 28, much of the world witnessed the total eclipse of a supermoon, or an eclipse that happens when the moon is at its closest point to earth and appears larger in the sky. As the earth’s shadow passed over the lunar surface, the moon looked from here as though it was slowly being covered in blood, giving the event its nickname of “blood moon.”

Glenn Beck posted a (terrible) photo of it and ominously told his followers, “Blood moon, super moon, Jewish holiday of Sukkot and the year of the Shemitah. Sign?” Supporters responded with messages like, “Tonight I ask for prayers. I feel like I’m being led to do something, but I am unsure how to begin. All I know is that I cannot stand and do nothing.”

This vague, apocalyptic rhetoric is harmless enough as idle fantasy. But Beck is an enormously influential person. In many ways, he was a chief architect of the Tea Party movement, which mobilized the most fundamentalist and conspiratorial elements of the already radical right-wing. And he’s far from alone: Across the board, Republicans have transformed from a semi-functional political party into a radical cult based primarily around medieval ignorance.

In response to deadly flooding in South Carolina last week, former congresswoman and Republican presidential hopeful Michele Bachmann tweeted, “US turns its back on Israel, disasters following.” Bachmann also attributed Hurricane Irene to an angry God in 2011, imploring Washington to “get the message.” Leaving aside the fact that the U.S. is by far the biggest supporter of Israel, military alliances have very little effect on the weather. Bachmann thinks it’s silly to blame superstorms on chemicals in the atmosphere but reasonable to blame them on gay weddings.

This image of presidential candidate Ben Carson has sparked a hashtag movement, but the FBI’s hate crime statistics show there is no war on Christians.

Moving on to the current election cycle, fundamentalist Christian and member of the apocalyptic Seventh-day Adventist sect Ben Carson has gotten a boost for comments he’s made on an imagined plague of violence against Christians. Despite being a gifted neurosurgeon, Carson flubs basic science on evolution and climate change. He also attempted to stab a friend at the age of 14, after which he locked himself in a bathroom for several hours, prayed, and allegedly overcame his anger problem. All this certainly sheds light on his rather bizarre personality.

Conservatives don’t need religion to go crazy, though. Rush Limbaugh is a devoted NASA conspiracy theorist who thinks the space agency fakes data to promote the hoax of climate change. When NASA announced the discovery of liquid water on the surface of Mars, most of the world’s imagination lit up. But not Limbaugh; he scoffed at the discovery and speculated that somehow, in some way, water on Mars would become part of the liberal agenda.

These are deranged, dangerous, deeply paranoid people with audiences so unwavering Limbaugh calls his own listeners “dittoheads.” And they’re just a random sample. It’d be too easy to continue down the line and talk about Todd Akin, Sarah Palin, Rick Santorum and countless others. But what is really worrisome is when influential Christians begin discussing the end times.

Bachmann recently told a radical Christian radio host, “Every single day we can talk about God’s time clock and the fact that Jesus Christ’s return is imminent… That’s why these are not fearful times, these are the most exciting days in history.” Glenn Beck warns of a new sign of the end times just about every single week. Christian literature is fixated on it and every decade or so has its doomsday prophet.

In the Christian end times, a battle between the forces of heaven and hell will consume all of civilization. At the conclusion of Armageddon, the Lord will return. Christians will ascend into Heaven and reach the next plane of existence. Fundamentalist Christians are dying, no pun intended, to reach this happy ending of their story. So why be so noble as to enter politics and try to steer things in the other direction? The sooner it all falls apart, the sooner the rapture.

But perhaps the more important concern is whether a person who honestly believes in this prophecy can be entrusted to lead the most powerful nation on earth. No one who’s eager to see the world end should be allowed anywhere near a nuclear arsenal potent enough to do the job dozens of times over. These are the same people who argue we should take no action on climate change because it’s all in God’s hands anyway.

This is the real danger in these doomsday preachers: crazy as what they say is, many of them are in positions to further their own prophecies. There are safeguards against it, not the least of which is that the average American – even the average Christian – isn’t so insane. But the growing influence of the Tea Party and the increasing willingness of our intelligentsia, including the New Atheists, to frame the world’s struggle as a religious one bodes ill for keeping insanity out of decision-making.