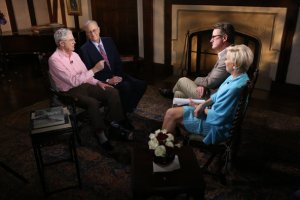 No serious scholar of history or political science considers the United States a democracy. Nor is the country a Constitutional Republic, which is sometimes given as the technical term. We like to think of ourselves as democratic, but America is, more or less officially, an oligarchy. This means the people have very little influence over policy, which is instead implemented by and in favor of private concentrations of wealth.

With election season in full swing, this simple fact gets overlooked and the platitudes about democracy are pushed harder than ever by pundits and politicians. Ironically, no time in America reveals more about our democracy deficit than the presidential election cycle. Between campaigns that are bought wholesale by billionaires and a news media that frames the election in the perspective of big business, Americans really aren’t invited to participate in the process much at all.

Americans’ only real role is to take a multiple-choice test every year or two, depending on the citizens’ level of engagement. This wouldn’t be such a bad way of doing things if every option on the test were available. But in most elections, the range is very narrow.

On the Democratic side, a progressive base has been galvanized by Vermont Senator Bernie Sanders’s candidacy. This presents an exciting option that hasn’t been available to left-leaning Americans for generations. But the Democratic establishment remains firmly entrenched with the Clinton family and their pro-business prerogatives. Clinton favoritism shows up in everything from media coverage to the Democratic debate schedule.

Debbie Wasserman Schultz, chairwoman of the DNC, came under fire from left-wing Democrats for sanctioning only six Democratic primary debates. The Democratic establishment knows that the more exposure Sanders gets, the better his chances. Maybe that’s why the next three debates are on Saturdays and Sunday. Americans hate politics enough; it’s hard to imagine ruining their weekend with it. Corporate media and the Democratic establishment are doing their best to choose a candidate so the American people don’t have to. 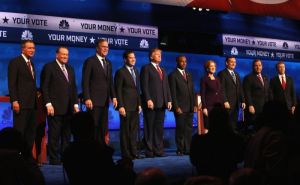 GOP candidates line up at the CNBC debate under the oddly appropriate tagline, “Your money, your vote.”

The GOP is pretending to offer its constituents a real choice with a higher number of debates and candidates. It’s been the year of the outsider, with self-funded candidate Donald Trump and a neurosurgeon who’s never held political office, Ben Carson, leading the Republican field. With most of the country having lost its tolerance for the political establishment, these mavericks look like exciting alternatives.

Don’t be misled. Carson may be the least establishment candidate on the Republican side, but a man with zero governmental experience and so many screws loose is a terrifying prospect to have control over nukes. To consider a billionaire real estate mogul anti-establishment is to have quite a radical definition of the word “establishment.” Another GOP candidate would be the third person in his immediate family to be the president. Whoever wins in the GOP primary, the oligarchy will be well represented.

In an absurdly sycophantic interview by MSNBC’s Joe Scarborough, leading oligarch Charles Koch, one of the billionaire Koch Brothers who pour money into Republican political campaigns to advance the cause of unrestricted capitalism, bragged about his crusade to get rid of money in politics. If Koch wants to take money out of politics, he could make a big dent this cycle alone by simply pulling out his own money.

But getting money out of politics isn’t really what Koch wants at all, not if “getting money out of politics” means giving ordinary Americans as much influence in politics as billionaires. Koch wants to spend money this cycle to get rid of money in politics because he’s tired of spending money on politics and he wants to just get his way already so he doesn’t have to spend anymore. By paying for Republicans to advance the interests of the mega-wealthy, he hopes to get his wish.

From Koch to the candidates themselves, Republicans have done their best to look like outsiders, victims of a liberal media that’s out to smear them. After their third debated, hosted by the business news network CNBC, Republicans were so offended by the line of questioning that candidates drew up a list of demands. These included vetting on-screen graphics and allowing ultra-right talk radio hosts to proctor the debates.

Unsurprisingly, the corporate media is aligned with corporate interests. But even they are not reverential enough for Republican candidates, who will go at each other’s throats with vicious personal attacks and then chastise the media for fact-checking their policy proposals. They are very keen that the public only be exposed to the truth they want them to see.

The relationship between politicians, big business and the media is coordinated to prevent as little power as possible from falling into the wrong hands – the people’s. But that such enormous effort is put into billionaires funding campaigns and the media orchestrating election coverage shows that people do actually have power, if only they come together to exercise it.

Truly, the only candidate that’s actually different this cycle is Sanders. Unlike every other politician in the race, he doesn’t claim that he’ll jump in the White House and fix everything. He asks his supporters to continue their political activism and advocacy long after the election cycle, calling for no less than a political revolution – which is the only viable option Americans have for throwing off the oligarchy and having future elections that will actually mean anything.