After being ganged up on by civilian Trump supporters, a Black Lives Matter activist is ejected from a Trump campaign event.

When Donald Trump formally launched his presidential campaign on June 16, he brought out a seemingly contradictory response in commentators. The most straight-faced of news commentators thought he was a joke and didn’t expect him to last. Only the cynics, Sarah Palin fresh in their memory, worried that he had a real chance. Five months later and the cynics were right: Trump remains on top in the GOP primary.

According to Nate Silver, the analyst who famously predicted nearly every state in the 2008 and 2012 elections, Trump’s prospects of actually winning the nomination – let alone the presidency – remain slim. Silver may well be right, but it doesn’t mean Trump will be disappearing off American TV sets anytime soon. His mere presence in the race has already done enormous damage to our national conversation.

From the moment he launched his campaign with a description of Mexican immigrants as drug-dealing rapists, Trump has sought favor among the most rabidly xenophobic of the GOP’s base. It may be why his numbers haven’t gone much above the 30 percent mark. Just as those who haven’t been turned off to him yet likely never will be, those who haven’t been won over probably won’t be, either.

In addition to his comments about Mexicans, Trump has been on the warpath against Muslims in recent weeks, especially following the Paris attacks. Trump has either actively declared an interest in or expressed openness to the possibility of closing mosques, having a national registry of Muslim Americans, and requiring Muslims to carry special forms of ID. 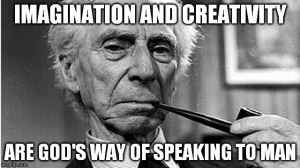 For the hell of it, I made up some flowery nonsense and put it over a picture of atheist philosopher Bertrand Russell. A good Facebook troll could probably get it shared thousands of times.

The fires Trump is stoking with his racist rhetoric have already heralded violent consequences. In August, two Trump supporters – who Trump forgivingly described as “passionate” – beat up a homeless Hispanic man in Boston. Not long after that, a supporter at a Trump event shouted, “White power!” And just last week, a Black Lives Matter protester who disrupted a Trump event was manhandled and shoved to the ground by Trump supporters.

In response to the controversy Trump said, “Maybe he should have been roughed up because it was absolutely disgusting what he was doing. This was not handled the way Bernie Sanders handled his problem, I will tell you.” Trump has criticized Sanders’s handling of Black Lives Matter disruptions. Sanders gave the protesters time to speak; Trump incited his fans to “Get him the hell out of here.”

Just days after that incident, Trump shared a meme that reported some pants-on-fire false statistics on violent crime. The meme ridiculously blamed black Americans for nearly every homicide in the nation, against their own race and whites. In reality, according to FBI data whites and blacks commit violent crimes against their own race at almost the same rate – 82 percent white-on-white and 90 percent black-on-black.

Even Bill O’Reilly was unimpressed by Trump’s excuse after controversy arose – a shrugging admission that he can’t be bothered to vet the accuracy of information he regurgitates to his gullible fans. As much as Trump’s macho, supremacist message makes great fodder for red meat Republicans, it’s also a dark reflection of the lazy and careless nature of modern information distribution.

There’s no way of knowing how many followers saw Trump’s tweet and internalized it as truth. Same goes for the millions of flatly false memes circulating on Facebook every day. For Trump’s followers, the “real America” is where good, Christian white people can get ahead and undesirables – everybody else – are kept out of the way by border walls and aggressive policing. Memes that support this worldview are passed on without any scrutiny.

Perhaps it’s no surprise that among nations deemed modern, the US is the second-most uninformed. Trump definitely isn’t helping. Not only are his supporters the nation’s worst informed and least engaged, the lies he feeds them are divisive, racist and xenophobic. At a time when the world needs desperately to unite against the scourges of climate change and Islamic fascism, this dangerous megalomaniac is about the worst person to dictate our national dialogue.