Gun debate’s most important question: where do they come from?

The San Bernardino shooters were killed in a standoff with police after claiming 14 innocent lives and wounding another 21.

In their coverage of the San Bernardino shooting, the BBC introduced the story with the phrase, “Just another day in the United States of America; another day of gunfire, panic and fear.” As The Washington Post’s Ishaan Tharoor aptly tweeted, “It only makes sense that the BBC treat a mass shooting in America like a carbombing in Baghdad.”

On December 2 at around 11 a.m., Syed Rizwan Farook and Tashfeen Malik opened fire at the San Bernardino Inland Regional Center. Fourteen people were killed, another 21 were wounded, and the assailants were killed in a standoff with police after a car chase. According to the LA Times, “The suspects were heavily armed, wearing tactical attire, and had an arsenal of ammunition and pipe bombs in their Redlands home.”

Investigators are currently looking into whether the two had ties to organized terror, but so far have turned up only tangential evidence. Regardless, the rampage is certainly an act of domestic terror and the deadliest mass shooting since Newtown a mere three years ago.

Politicians, particularly those on the right, are offering their standard empty offers of prayers and condolences. The New York Daily News called out three Republican presidential candidates and Speaker of the House Paul Ryan on their December 3 cover featuring the enormous headline, “God isn’t fixing this: As latest batch of innocent Americans are left lying in pools of blood, cowards who could truly end gun scourge continue to hide behind meaningless platitudes.”

American gun violence is a scourge. A recent Washington Post study found there have been more mass shootings than days in 2015. In fact, the San Bernardino shooting wasn’t the only one on December 2. The Guardian catalogued 1,052 mass shootings in 1,066 days. Gun violence is on a track to surpass automobile accidents as a leading cause of death among young people.

Our continued inaction on this crucial issue is largely a consequence of the almost religious gun culture, involving a fetishistic fixation on the weapon itself and a radical misreading of the 2nd Amendment. There are almost as many guns as people in the US, yet the dominant voice in our national conversation is still gun fanatics arguing that we need more guns, not less.

The NRA pushes expanding firearm proliferation as though merely carrying a gun makes a person an expert marksman able to act coolly in a crisis. The reality is exactly the opposite. Guns do not de-escalate conflict. According to FBI data on 160 mass shootings between 2000 and 2013, unarmed citizens stopped active shooters in 21 incidents; armed citizens stopped only seven and only one of these was not a security guard or an off-duty cop.

Tied into this is the notion of “gun-free zones.” Critics allege that killers target such zones knowing they won’t be fought back against. Sean Whalen, a conservative personality with tens of thousands of YouTube and Facebook followers, wrote after San Bernardino about how shooters don’t attack places where there are lots of guns – NRA meetings, sporting goods stores, police stations and so on. 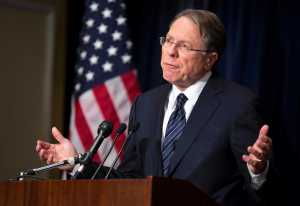 Of course, the same can be said – at least so far, and hopefully in perpetuity – for music stores and comic book conventions. But whether it’s a gun-free zone or not, according to the FBI mass shooters die in the act more than half the time, as many as 40 percent by suicide. Shooters know they will likely die; it might be why so many leave behind manifestos. Their decision isn’t necessarily to do with where it’s safest to commit a rampage.

The real problem is that killers have the guns in the first place, not where they choose to target. If they didn’t have the guns it would be far more difficult to inflict mayhem. It’s important to know the profile of these mass shooters, especially how and when they acquired their weapons and whether they have documented evidence of dangerous mental illness.

Many times they do. The New York Times found that in at least 15 recent mass shootings, including in San Bernardino, the guns used were purchased legally. Further, the paper reported, “At least eight gunmen had criminal histories or documented mental health problems that did not prevent them from obtaining their weapons.” The Washington Post found that more than 2,000 suspects on a terrorism watch list acquired guns legally.

A popular conservative talking point holds that gun laws are futile because killers don’t obey the law anyway. If it turned out that most mass shooters were buying their guns on the black market, the point might have some weight. The answer to where the guns are coming from may be the most important one of the whole debate.

Yet the NRA persistently blocks any serious inquiry into such questions by organizations like the CDC. Information from such a study could help reveal not just the extent of gun violence, but what legislative actions would be appropriate in curbing it. If killers are going through legal channels to arm themselves, there ought to be legal channels to stop them. The NRA is desperate to hide from the public what it knows full well will be damning results.

No organization that profits from the sale of guns and tries to suppress information relating to gun violence should be taken seriously in the discussion. Yet the NRA is ever the loudest voice, guiding the national conversation without any serious resistance from the Washington establishment.

Data that is available unsurprisingly demonstrates a strong correlation between levels of gun ownership and gun violence. The US has the most guns and is the world’s infamous leader in gun deaths. Australia enacted strict gun control measures after a 1996 mass shooting and has had very little gun violence since. The same country now warns its citizens before they visit the US about the gun violence here.

Until the NRA’s dominance over our system is confronted, tourism boards are going to continue issuing those warnings. A couple dozen mass shootings ago commentators realized this was becoming routine, even banal. Now, even pointing out the banality is becoming cliché. Gun violence is just a fact of American life, like rush hour traffic or rude customer service.

If the NRA had half the guts it claims to have, it would allow its claims to be tested by research into the important questions: how do killers get their weapons and how can we keep weapons out of their hands. But when there is enormous profit to be made off of gun sales – and when mass shootings cause huge spikes in those sales – don’t expect transparency, or even an honest effort to fight gun violence, to become part of the gun lobby’s platform.