Everything must go: how Trump is giving America away to corporations 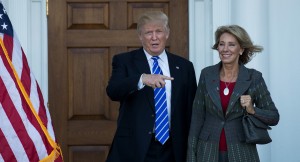 Shortly after the election, Donald Trump released a video outlining his 100-day plan for the beginning of his presidency. It contained one of the most arbitrary items ever to exist in a presidential platform: a plan to, for every one new regulation introduced, remove two. The compromise Trump is brokering is clear. If citizens want something from corporate America, they’ve got to give corporate America two things in return.

Already this is in perfect evidence. Trump’s deal with Carrier, the air conditioner manufacturer that wanted to move 2,100 jobs to Mexico, made big headlines last week. Even many liberal commentators applauded Trump, who persuaded Carrier to keep around 800 of those jobs in Indiana.

But as the fine details trickled out, the deal became less impressive. While Trump proclaimed, “Companies are not going to leave the United States anymore without consequences,” Carrier received a $7 million tax credit and a bevy of incentives – and still plans to ship 1,300 jobs to Mexico. As Bernie Sanders wrote, “Trump has… signaled to every corporation in America that they can threaten to offshore jobs in exchange for business-friendly tax benefits and incentives.”

That Trump will end up giving more away to corporate America than any president in history can be reasonably predicted. After all, he brings new meaning to the notion that corporations are people. Despite the populist rhetoric he used during the campaign, every move he’s made since the election has further consolidated power in wealthy hands. He has solicited the very same crony capitalists that formerly backed “Crooked” Hillary Clinton and has assembled a dense network of the superrich for his cabinet and transition team.

Ivanka Trump looks on while her father hosts Japanese dignitaries, including Prime Minister Shinzo Abe. She is working on a deal with a retailer owned by the Japanese government.

Such appointments fly in the face of Trump’s repeated pledge to “drain the swamp.” Private-sector cabinet members are nothing new, but Trump is charting new territory with his “everything must go” attitude toward public institutions. For decades, business as usual for the Washington establishment meant special interests paying politicians for favorable treatment. Trump, who promised to fight such corruption, has designed a creative solution: cut out the middlemen and place the special interests in office directly.

In addition to giving away half the government to for-profit concerns, Trump is promising corporate America precisely what it’s spent so many millions of dollars lobbying for in the first place: lower taxes and fewer regulations. Trump’s income tax plan disproportionately benefits the highest earners and his proposed slashing of the corporate tax rate from 35 percent to 15 percent will reduce federal revenue by trillions of dollars. Meanwhile, 61 percent of Americans say the rich pay too little in taxes.

Deregulation is a little more popular among the electorate – so long as it’s unspecific. Particular regulations are often quite popular, including regulation of Wall Street. Nearly 60 percent of Americans favor strong environmental regulations. Surely not all regulations are necessary, but Trump’s 2-to-1 ratio comes from nowhere. Cutting two regulations every time one is introduced is arbitrary and nonsensical.

It does, however, illustrate how much of the public good Trump plans to surrender to private interests. He is ushering in a new era of business-run society, marked by rampant privatization and the explicit use of political office to achieve business ends. Already Trump has used his President-elect status to arrange controversial powwows with heads of states where he and his family have business concerns, including a phone call to Taiwan and a meeting with the Japanese Prime Minister attended by his daughter Ivanka.

Trump has no intention of shifting political or economic power down to ordinary Americans. He may save a few American jobs by bribing companies with taxpayer money, but these will serve primarily as propaganda opportunities to maintain his populist image. While acting as a cheerleader for the working man, Trump will give as much of the country away to corporate America as he can during his time in office.

One thought on “Everything must go: how Trump is giving America away to corporations”