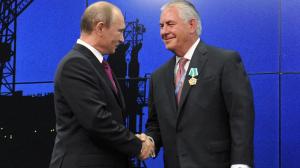 Trump may never have met Putin, but his Secretary of State, ExxonMobil CEO Rex Tillerson, has received an Order of Friendship from him.

Donald Trump is less than five weeks away from being inaugurated as the 45th President of the United States. His cabinet picks offer Americans an ominous preview of what they can expect for the next four years. Corporate America will run roughshod over workers and consumers as Trump obliterates the line between big business and government. But it’s his Secretary of State pick, ExxonMobil CEO Rex Tillerson, which bodes most ominously for both the environment and international relations.

As Trump fends off allegations that Russia conspired to help his campaign, Tillerson’s ties to Vladimir Putin are being closely scrutinized. In 2014, a $300 billion Arctic exploration deal between Exxon and state-owned Russian oil company Rosneft was scuttled when President Obama imposed sanctions on Russia over its annexation of Crimea. Tillerson’s appointment is seen as an opportunity to resume business. Whether Russian hacking claims are verified or not, Trump’s benefit to Putin is becoming clear.

That Trump loves oil has never been in doubt. On more than one occasion he has lamented the US military’s failure to steal Iraq’s oil. After promising to “bomb the shit” out of ISIS and their oil rigs, Trump said, “And you know what, you’ll get Exxon to come in there, and in two months… They’ll rebuild that sucker brand new. And I’ll take the oil.” He continues to push conquest of Middle East oilfields as a sound foreign policy.

His opinion will be shared by the incoming State Department. In addition to Tillerson, Trump is expected to pick John Bolton as Deputy Secretary of State, the department’s number two position. Bolton served in President Bush’s State Department and was an important architect of the Iraq War. In one interview, Bolton described the Middle East as “the critical oil and natural gas-producing region that we fought so many wars to try and protect.”

The US relies much less on foreign oil now. In 2015, only about a quarter of petroleum used in the US came from abroad. A booming oil and gas industry now makes the US one of the world’s largest oil producers and employs, directly or indirectly, some 8.5 million Americans. But a self-sustaining US energy economy is not the goal of multinational corporations like Exxon. Their scope goes far beyond any nation-state, and their power is greater than most of the world’s governments.

Trump spokeswoman Kellyanne Conway dismissed Tillerson and Putin’s connection, saying it’s not like they drink vodka together. But they do drink champagne, especially when toasting a deal that allows Exxon to drill in the Russian Arctic.

Exxon even undermined a 2011 peacemaking effort by US diplomats to split Iraqi oil among various factions. According to the Wall Street Journal, “Mr. Tillerson has done business with dictators in Angola and Chad and talked oil with former Libyan leader Moammar Gadhafi.” Exxon has investments in Saudi Arabia and Mexico. Tillerson once told an audience that when dealing with foreign leaders, his attitude is, “I’m not here to represent the United States government’s interest… I’m a businessman.”

When he leaves Exxon to become Secretary of State, Tillerson’s job will be precisely reversed. But that’s too deeply ingrained a mindset to walk away from. Exxon makes hundreds of billions of dollars in revenue all over the world every year. It’s hard to imagine Tillerson will make decisions that negatively impact that cash flow by, for instance, standing up to human rights abusers in oil-rich nations – unless those nations cut off supply to Big Oil.

Nearly 40 percent of the world’s oil comes from the three biggest producers: Saudi Arabia, Russia and the United States. Exxon is deeply embedded in all three, including a potential venture on US land with a Saudi petrochemical company. Despite occasional tough talk toward the kingdom, Trump also has extensive business there. Trump’s admiration of Putin is well-documented and more about Tillerson’s relationship with him comes to light all the time. Seeds are being planted for Exxon to run an environmentally devastating new world order.

Trump is also clearing the way of any domestic obstacles to Big Oil’s agenda. He has pledged to cancel NASA’s climate science division. Government scientists were alarmed at the possibility of a coming purge when Trump’s transition team asked for the names of all federal employees who worked on climate change. And part of the GOP platform under Trump includes giving federally protected lands to the states, whose Republican governors can then auction them off to energy concerns.

As the consequences of climate change continue to mount and more countries get serious about confronting it, Trump’s talk of unraveling climate agreements threatens to marginalize and isolate the US on the world stage. Reneging on agreements could further set us against China, a nuclear-equipped nation with which Trump already feuds. Geopolitical realignments could pit climate-proactive nations, perhaps led by China, against the US, Russia, and a handful of despotic oil fiefdoms, all under the banner of ExxonMobil.

Whether it gets to that point or not, environmental defenders at home have long, hard work ahead. Trump is not only authoritarian, he has personal investments in the oil industry. He owned stock in and received donations from the company behind the Dakota Access Pipeline, Energy Transfer Partners, and his Department of Energy appointee Rick Perry sits on the company’s board. Militarized police arrested journalists and terrorized protesters at Standing Rock during Obama’s presidency; under Trump, state violence will likely be even more extreme.

Big Oil is perhaps history’s most massive enterprise, eclipsing most nation-states in wealth, power and scope. When Donald Trump takes office, it will essentially become the US government. Environmentalists won a preliminary round at Standing Rock, but the resistance mustered there will need to be multiplied a thousand-fold to prevent the industry’s total rule, and ruin, of the world.