For the love of God, Trump supporters, don’t worship the man 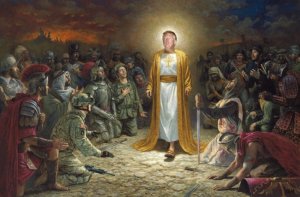 A popular sub-Reddit devoted to Trump refers to him as a “God Emperor.” It certainly matches Trump’s view of himself.

Countless alarms, both at home and abroad, have been raised by the election of Donald Trump. Not everyone is worried, though. Many of Trump’s supporters are eager to defend his every lie, his every unconstitutional policy, and his every whining tweet. This part of his support base is drawn to him like a cult to its guru and feels he can do no wrong. That’s a dangerous attitude to have about any elected official, and about Trump in particular.

In January, Trump declared that he could shoot someone in the middle of 5th Avenue and not lose any supporters. The media cycle eventually provided an opportunity to test that claim, or something close to it. Leaked audio of Trump bragging about committing sexual assault seemed, for a week or so, like it might doom his campaign. But Trump not only won the election, he did it with 53 percent of white women. Clearly he was right – his actions don’t yield any political consequences.

But it’s worse than that. It’s not just that his supporters don’t care, it’s that many truly believe in him. No matter how brazen Trump’s lies are, they resonate through the echo chambers of his base and come to be widely believed.

When Trump bypasses the “dishonest media” and takes his message straight to supporters through rallies and Twitter, this is the result he’s hoping for. The effort to create an uninformed electorate blindly devoted to him is deliberate. And it’s working so well that audiences applaud even when he rubs his con in their face – as when he responded to a “lock her up” chant by saying, “Forget it. That plays great before the election. Now, we don’t care.”

Many supporters have gotten wise to Trump. Some are expressing their frustrations on Twitter. But fanatical supporters on message boards and social media, as well as Trump surrogates on TV, persist in an attempted deification of the man. His backpedals haven’t shaken their faith.

Trump speaks with campaign member Omarosa Manigault, who said Trump has an enemies list and promised revenge on “everyone who’s ever doubted Donald, who ever disagreed, who ever challenged him.”

Omarosa Manigault, a former contestant on Trump’s game show and his campaign’s Director of African-American Outreach, announced, “Every critic, every detractor, will have to bow down to President Trump… it is the ultimate revenge to become the most powerful man in the universe.” RNC Chairman and Trump chief-of-staff Reince Priebus recently sent out a controversial holiday message saying, “Just as the three wise men did on that night, this Christmas heralds a time to celebrate the good news of a new King.”

Conservatives rightly lambasted liberals for this kind of thinking when, for instance, Louis Farrakhan referred to Barack Obama as the messiah. But Farrakhan is a fringe element. Trump’s deification is coming from mainstream Republicans and from Trump himself. His boundless assessment of his own magnificence – exemplified by declarations like, “I alone can fix it” and “I know more about ISIS than the generals do” – puts him more in league with North Korean dictators, about whom legends are told of supernatural birth and golfing 11 holes-in-one in a single round.

For years the GOP has more closely resembled a money cult than a functioning political party. Trump, a dysfunctional politician who’s almost literally made of money, is the perfect leader for such an organization. But working people must not be taken in. Trump, and Trump-approved media, cannot be their only source of information. Supporters must decide for themselves what they think about Trump’s childish Twitter rants, his appointment of Goldman Sachs bankers to his administration, and his dangerous saber-rattling with nuclear weapons.

Bill Maher is almost certainly accurate when he says, “Donald Trump is his own god.” But he shouldn’t be anybody else’s. Trump is still the same short-fingered vulgarian, the same admitted sexual predator, the same conspiracy peddler, and the same unashamed fraudster that he was before becoming president. And because this is still America, he will continue to be ridiculed by satirists, confronted on his dangerous policies, analyzed by critical media, and hopefully, challenged by working-class supporters – not worshipped like a God Emperor.

One thought on “For the love of God, Trump supporters, don’t worship the man”