Enough with the Russian hacking story 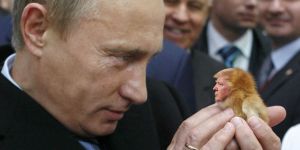 Whether they have a formal agreement or not, Trump’s agenda certainly aligns with Putin’s.

Shortly before his first press conference as president-elect, a story broke that Donald Trump was being blackmailed by Russia with financial data and a sex tape filmed in a Moscow hotel. It was only the latest unverified scandal in the ongoing saga of Trump’s Russia connection which, despite scant evidence for many of the claims, has dominated mainstream coverage of our post-Trump world. Often the reports have come at the expense of adequately exposing greater evils being perpetrated in plain sight. END_OF_DOCUMENT_TOKEN_TO_BE_REPLACED